A series of meetings and statements since the successful satellite and nuclear tests suggests that a new ideological line is taking shape in North Korea. We are looking for an appropriate label. “Missiles and Nuclear Weapons First Policy” comes to mind, but it is a little inelegant. We have decided on “Songun Mark 2.0.” 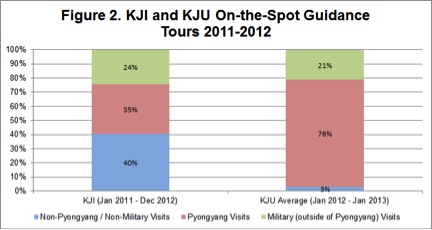 Several hypotheses suggest themselves, most of them discouraging. The first is that this is a predictable artifact of the transition. Kim Jong Il was more secure and the young leader naturally needs to be close to the capital where the business of consolidating power continues. In fact, of Kim Jong Il's first 150 appearances after his father’s death (1994-1997), less than 10% of his visits were either outside Pyongyang or non-military in nature.

A second related interpretation is that during the transition, the emphasis on the military and security apparatus is a natural turn, since these are core constituencies.

The final, and most discouraging, interpretation is that this emphasis on the military is not transitional but reflects a policy bias that will persist. As misguided as his approach, Kim Jong Il showed more interest in reviving the moribund economy than Kim Un, who appears to be counting on a combination of Chinese foreign investment and trade and a new nationalism to rally support, at least within the capital.

Outside of OSG visits, there have been other indications that Kim III is seeking to consolidate his base of support among the urban elite. The past year has featured a number of new projects aimed at the new class, including a maternity hospital, apartment complexes, a funfair, health complex and skating rink.

The usual caveats apply; we don’t want to exaggerate the significance of these patterns, which could have random-walk elements. There is also the possibility that Kim III has made a conscious decision to let the Cabinet handle economic affairs, while he deals with more pressing security issues. But the overwhelming attention given to Pyongyang and the lack of non-military visits outside the capital seem an unfortunate combination. Let’s hope Kim Jong Un’s cabinet will at least report on what is happening in the rest of the country, where economic circumstances are clearly much worse than in Pyongyang. We have called evidence of the capital's boom "the Pyongyang illusion"; it is not representative.