Yesterday we will provided a round-up of diplomatic developments around the Korean Peninsula in the wake of the fifth test. An important piece of the puzzle, and where we turn out attention today, is determining whether Kim Jong Un’s gambit will have any economic effect. A good place for setting the baseline is KOTRA’s report on North Korea’s trade; we have used the data—drawn ultimately from international customs data, but cleaned—and consider it at least reasonably reliable. The bottom line is that Kim Jong Un’s apparent confidence does not seem to have a firm foundation in the country’s external accounts.

But as with the larger strategic picture, there are two crucial caveats. First, the terms of trade picture for the country is mixed but could be neutral or even positive. We have noted the effects of the end of the commodity supercycle on exports, but that drop-off in prices cuts two ways: fuel and food prices have also moderated, reducing the import bill. The net effect is ambiguous. One simple statistic captures the terms of trade dynamics noted above. China Customs has not reported data on its oil exports to North Korea since 2013 thus forcing KOTRA to impute the figures itself. On guesstimating the amount of oil the Chinese were selling KOTRA raised the volume estimate from 500,000 to 525,000 tons, but at global prices they estimate the value went from $500 million to $280 million.

But second, it is striking that the country continues to run a pretty healthy current account deficit, despite the fact that trade appears to be shrinking. This suggests what we have long argued: that China continues to finance the country (and thus the regime).

Overall, KOTRA shows total NK trade with the world at $6.25 billion in 2015, an 18% drop from $7.61 billion in 2014. The overall decline closely tracks trade with China (off 17% to $5.7 billion) because the country now accounts for 91.3% of total NK trade. In the past, KOTRA’s numbers in this regard were misleading because they treated North-South trade as internal to Korea. But now, with the post-Cheonan sanctions and closure of Kaesong, this is just about right; there is practically nothing left North-South.

But trade is off with the remaining top-five partners as well: Russia (-9% to $84 million, only 1.3% of total trade), India (-13% to $76.5 million) and Thailand (-35% to $50 million). Only the Ukraine saw an increase among the top five (+232% to $35.8 million). A little chunk of this increase is from a boost in chemical products that NK is exporting as well as plastics, medical devices, and related products. But the bulk of the increase comes from North Korea importing $22.6 million in aircraft and related products from the Ukraine. It really does appear that North Korea’s trade is shrinking.

How to explain the hefty current account deficit of $859 million shown in the figures below? There are a number of possibilities. First, KOTRA reports merchandise trade and it is well-known that North Korea is a service exporter, primarily of labor. This could partly—or even wholly—offset the deficit on the merchandise account. Second—and our favored explanation—is that there is still Chinese or other external financing for the government. This could take several forms, from foreign direct investment to simply allowing arrears or outright subsidies; for example, Beijing writes a check to a food exporter to help cover the food deficit during the lean season. The crucial question: with the fifth test, is China going to remain equally indulgent or decide that enough is enough? 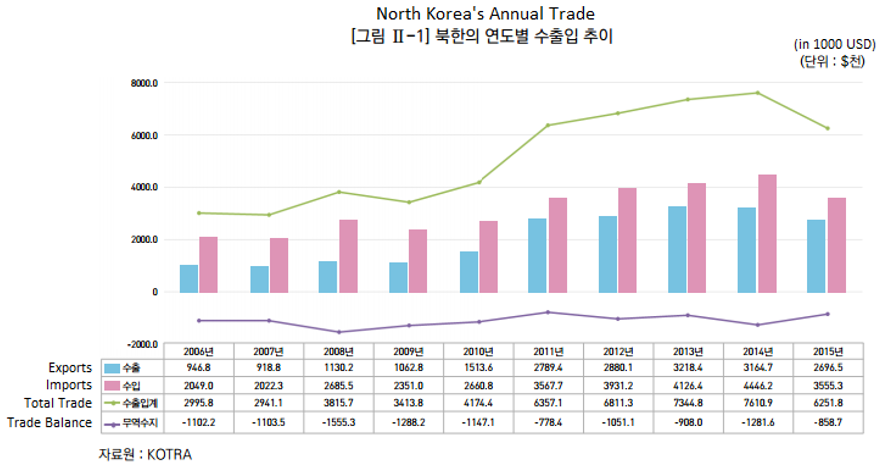 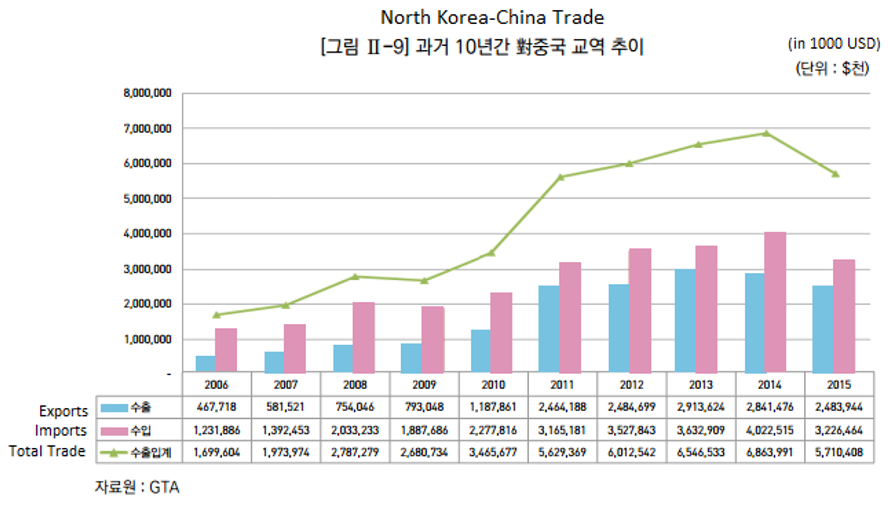