The assassination of Kim Jong Nam continues to drive the headlines on the DPRK. But there is an important backstory: what were Kim Jong-nam—and the other North Koreans who are there—doing in Malaysia in the first place?

As the world now knows, Kim Jong-nam’s assassination was carried out using the highly lethal VX nerve agent, classified by the UN as a weapon of mass destruction. The attack sends a message to North Korea’s elite, but also–even if inadvertently—reminds the international community of the DPRK’s chemical weapons program. A good introduction to the general problem from the CIA can be found here. A deeper dive by our friend Dan Pinkston for the International Crisis Group can be found here. Although a few years old, there is not much new in the public domain and the bottom line remains the same: not a signatory to the Chemical Weapons Convention, North Korea is estimated to have thousands of tons of chemical agents, including but by no means limited to VX.

By coincidence, we learned this week that getting UN Security Council cooperation with respect to this issue is unlikely. If the Security Council can’t pass a resolution on Syria’s more-or-less open use of chemical weapons against civilians, we don’t have high hopes they will address the assassination of Kim Jong-nam. But they should, and South Korean foreign minister Yun Byung-se raised the issue at the Conference on Disarmament on Tuesday, arguing that North Korea should be suspended from the UN.

The Malaysian government is showing at least some spine on the issue, although we are concerned that the perpetrators—but not the masterminds—will get thrown under the bus. Siti Aisyah and Doan Thi Huong, the Indonesian and Vietnamese hired to do the hit, have been charged with murder (which potentially carries the death penalty). But as of this writing the single North Korean in custody, Ri Jong Chol, has not been charged and seven potential suspects are still at large (including three that could still be in the country).

A high-level delegation headed by Ri Tong-il, former deputy ambassador to the United Nations, has been dispatched to do damage control. North Korea has refused to acknowledge that the deceased was Kim Jong-nam, simply referring to him as a “DPRK citizen.” In a classic screed, KCNA has claimed that “the biggest responsibility for his death rests with the government of Malaysia as the citizen of the DPRK died in its land" and that “unjust acts of the Malaysian side are timed to coincide with the anti-DPRK conspiratorial racket launched by the South Korean authorities.” Malaysian Foreign Minister Anifah Aman has called the DPRK ambassador to Malaysia “delusional” and recalled its ambassador from Pyongyang. (The row has now turned into an embassy standoff as two of the men accused of participating in the assassination are now holed up at the DPRK embassy: one high-ranking official who claims diplomatic immunity and another, an Air Koryo employee, who is untouchable on the embassy grounds.)

But more importantly, Deputy Prime Minister Datuk Seri Dr Ahmad Zahid Hamidi has since instructed the Foreign Ministry to assess Malaysia’s diplomatic ties with North Korea, which leads us to the backstory. Malaysia-DPRK ties have for years flown mostly under the radar. The two sides established diplomatic relations in 1973 and Malaysia is one of just twenty-four countries that operate an embassy in Pyongyang. Malaysia and North Korea maintain a small amount of trade in a hodge-podge of commodities: machinery, clothes, chemical products, wood, paper products, and the like. Contrary to some press reports—including in Malaysia--Malaysia-DPRK trade has actually trended downward since the mid-2000s, in line with the gradual drying up of all North Korean trade except with China (see graph below). In 2015, Malaysia exported $4.5 million to North Korea and imported $1.3 million; For 2015, KOTRA listed Malaysia as North Korea’s 21st largest trading partner. More recent data suggests total Malaysia-DPRK trade decreased by a further 17 percent in 2016. 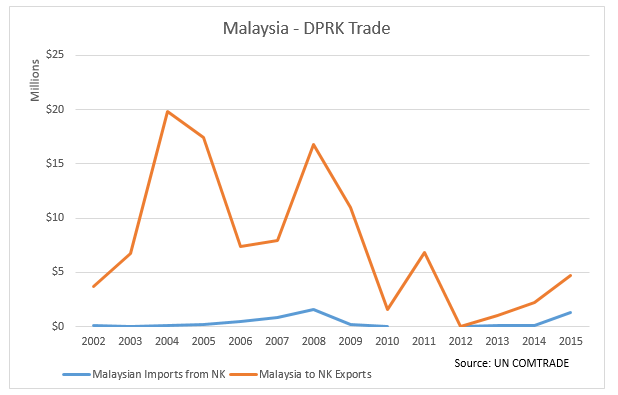 Clearly, Malaysia-DPRK trade ties are not a big story (although the deficits probably reflect some financial flows to North Korea). But Malaysia’s toleration of North Korean illicit activities should be a much bigger story. Malaysia offers certain advantages for North Korea: it has traditionally been a non-aligned state; it is a highly open economy; it has a relatively developed financial sector; and is less consequential for geo-political reasons than other countries with which North Korea deals. An added benefit is that because Malaysia is predominantly Muslim, it supports a variety of business and social networks with the Middle East, including with Iran.

All of that is largely circumstantial, but other information is much less so; indeed, it is outright actionable. We can do no better than refer you to our favorite sanctions hawk Josh Stanton, who has a fantastic piece on his blog One Free Korea providing press and other intelligence links on Malaysia’s lax enforcement of sanctions. The country has been involved as a link in a number of infamous interdiction cases, but one choice story will suffice to make the point. James Pearson—one of our favorite journalists on the North Korea beat—and Rozanna Latiff—have a fantastic story for Reuters on Glocom, a front company run by North Korean intelligence agents out of an office in Little India in Kuala Lumpur that sells battlefield radio equipment in violation of United Nations sanctions (the tip came from access to a forthcoming UN Panel of Experts report that will blow the whistle on this and a number of other sanctions evasion strategies).

In a 2015 Financial Action Task Force (FATF) report on anti-money laundering and counter-terrorist financing, Malaysia received a generally favorable evaluation. The report found that overall Malaysia has strong political commitment and anti-money laundering/counter-terrorist financing coordination structures. But the devil of the report was in the details: that Malaysia could use improvements in its legal framework for targeted financial sanctions against WMD proliferation and prosecution of money-laundering. The report specifically noted that Malaysian authorities have not worked in a systematic way to detect sanctions evasion activities by Iranian and DPRK entities. The report also questioned whether Malaysian authorities understood proliferation concerns related to DPRK diplomatic personnel arising from UNSCR 2094. It found that while the Malaysian government has procedures in place to limit banking services provided to high-risk jurisdictions (Iran and DPRK) that “more considered guidance for identifying and mitigating risks” is needed. Translation of polite international bureaucratic-speak: the authorities don’t really know what the North Koreans might be doing in the country.

Another area where Malaysia has been exposed to DPRK illicit activities is through its bilateral visa waiver program. Malaysia is one of 40 countries which maintains such a program with North Korea but as this post was going to press the Malaysian government announced that it would terminate the visa waiver agreement effective March 6. This program has provided ample opportunity for mischief, including through labor exports (in Congressional testimony in 2015, Greg Scarlatoiu, Executive Director, Committee for Human Rights in North Korea, estimated that there were 300 North Korean workers in Malaysia, but given the visa waiver program who knows?). Singapore had a similar visa waiver agreement with the DPRK until it canceled the program in 2016 in the wake of North Korea’s nuclear provocations; as an outstanding C4ADS report recently documented, North Korea was actually running illicit commercial activity out of its Singapore embassy, and Singapore is—well—Singapore. The broader problem was recently acknowledged in UNSCR 2321, which called upon states to reduce the size of DPRK diplomatic staff and to restrict bank accounts to one per accredited DPRK official.

We sincerely hope that Malaysia cracks down, but if it cannot be encouraged to do so that Treasury immediately open an investigation of whether secondary sanctions on Malaysian entities—including banks—might be warranted for their enabling behavior. Following North Korea’s 1983 bombing that killed South Korean cabinet members in Rangoon, Burma severed diplomatic relations with the DPRK. It’s hard to see why Malaysia wouldn’t do the same now given what has—and is—transpiring.

(Past posts on Kim Jong-nam’s murder can be found here and here. A good biographical sketch of Kim Jong-nam that clears up some misunderstandings can be found at Michael Madden’s North Korea Leadership Watch).

Correction: we originally noted incorrectly that Malaysia was the last country to maintain a visa-waiver program with the DPRK but there are now 39 such countries; see Yonhap's report on the 2017 Passport Index.

Personally I think it would be good if Malaysia severed relations with the DPRK, but the assassination of Kim Jong Nam is far from the equivalent of the attempted assassination of Chun Doo Hwan.  Although Chun was not killed, the victims included a Deputy Prime Minister, three other ministers, several presidential secretaries including the Chief of Staff (who is the father of the head of the Asan Institute), and others, including Burmese officials.  Also the venue was the mausoleum for venerated nationalist leader Aung San (the father of Aung San Suu Kyi).  The Rangoon bombing was an attack on the ROK leadership AND Burmese institutions.  The assassination of KJN is not of that stature.