Our hearts go out to the North Koreans affected by the current flooding. According to the UN, the floods are devastating, leaving 60 dead, 44,000 displaced, and 4,400 homes destroyed. (See the UN's infographic below). The worst-hit counties are Yonsa, Musan, and Hoeryong City. This natural disaster comes after last year’s Typhoon Goni, which also caused significant damage in the North Hamgyong region.

North Korea is now in the process of seeking humanitarian support from the international community, which is likely to prove a hard ask. As Han Song-Ryol has moved on from his position as head of KAPES, the entity which coordinates with foreign donors, the task will fall to Ms. Choe Son-Hui. Just last week, Justin Rohrlich at NK News covered the challenges for NGOs and international organizations in conducting humanitarian work in the DPRK. Obstacles range from cumbersome banking restrictions that force aid workers to deal exclusively in cash, to agencies making do with perennially underfunded projects. Humanitarian exemptions are built into US sanctions laws and executive orders and UN Security Council resolutions for good reason, but this does not mean that the process is frictionless even were North Korea completely cooperative.

But the problem is a wider political one. This blog has consistently argued that humanitarian assistance is humanitarian assistance, and should be held apart from politics; if there is an acute short-term humanitarian need, then the international community has the obligation to try to meet it. But politics does in fact intrude. As Rohrlich notes, 2015 UN agency appeals totaled $110.8 million, but commitments were only $18.8 million or 17 percent. Things have improved marginally in 2016, with requests of $116.7 million and commitments of $28.3 million or 24 percent of the total ask, itself no doubt moderated. But this was before the current devastation hit. As a practical matter, it may be hard to raise funds for humanitarian operations at virtually the exact same time that the UN Security Council is condemning the last round of missile launches.

In theory, the most natural humanitarian aid providers to the DPRK should be South Korea and China. In the past Seoul has played a role in disaster relief to the North. But North-South humanitarian assistance, or any kind of cooperation, is down to practically nothing. Park Geun-hye sought to distinguish her Trustpolitik plan from her predecessor’s North Korea policy by delinking humanitarian aid from high politics. She was greeted shortly after taking office with a nuclear test and the unconditional aid aspect of Trustpolitik never took off. According to the Ministry of Unification, as of yet there has been no North Korean appeal to the South Korean government for flood assistance.

Given the location of the floods, China will also no doubt be engaged. An interesting issue to watch is if direct lines of transport are opened to the flood affected areas, rather than routing things through Pyongyang, and if Chinese personnel play a role on the North Korean side of the border. 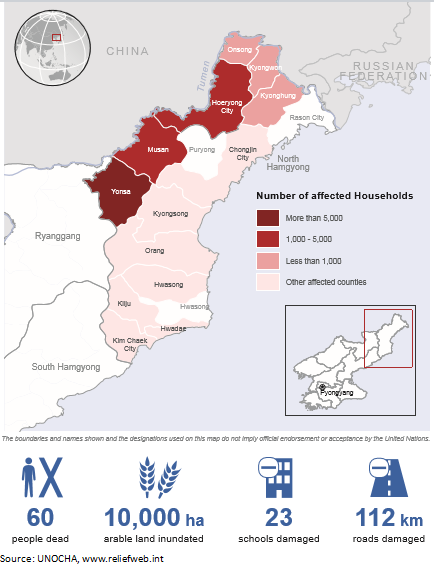