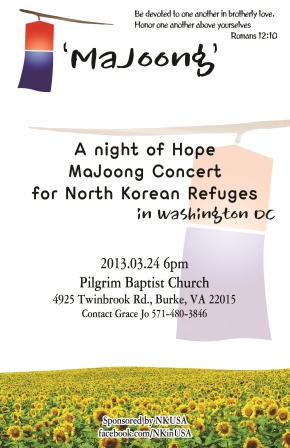 We pass along information on the following as a courtesy to our friends the North Korea Freedom Coalition and NKUS, an organization of North Korean refugees in the United States.  The concert, featuring North Korean defector and pianist Kim Cheol Woong, will take place this Sunday just outside of Washington in Burke Virginia.  Be sure to attend if you live nearby.

Spring is almost here, full of hope and dreams. Amongst many people who have their own dreams cherished in their hearts, there is a certain group of people whose dreams words fail to describe.

A while ago, we, NKUS -- North Korean refugees in the USA -- received a phone callfrom Susie Hwang (alias), a 40-year-old North Korean defector woman residing in Texas. She was asking for prayers and help to rescue her two nephews who are still in North Korea.

Every day the two nephews, Faith and Hope (aliases), are looking over the Tumen Riverdespite the harsh wind in North Korea waiting for the two angels that their aunt haspromised them to send. She has said to them, "Two angels will guide you to a heaven-like country where I am living."

NKUS and the local Korean Americans have joined effort to host "A Night of Hope: MaJoong Concert" on March 24th at Pilgrim Community Church in VA (4925 Twinbrook Rd Burke, VA 22015) at 6PM.

MaJoong means "going out to greet those who come" in Korean. So let's MaJoong Ms. Hwang, Faith, and Hope together.

This concert will feature a North Korean defector pianist Cheolwoong Kim, tenor Juan Sim, and KORUS competition winner Ian Chang to share their love. We believe the Word of God that He will fulfill our needs abundantly if we dedicate ourselves for our neighbors.