Yesterday, we looked at trends in China’s outward foreign direct investment into North Korea through data provided by China’s Ministry of Commerce (MOFCOM). We saw that the number of newly registered Chinese investments in the DPRK has been increasing steadily since a drop off in 2008, concentrated mostly in manufacturing but with an increasing share in trade and services from 2009.

But what of the magnitude of these investments? There is no publically available data that puts a value on the size of each specific project, nor the flows associated with it. Moreover, the capital flows associated with any given project might take place over several years. Nonetheless, we can line up the trends in the number of projects with MOFCOM’s reporting on aggregate outward FDI flows into the DPRK as well as the changes in stocks; a short technical note below clarifies the nature of the data. 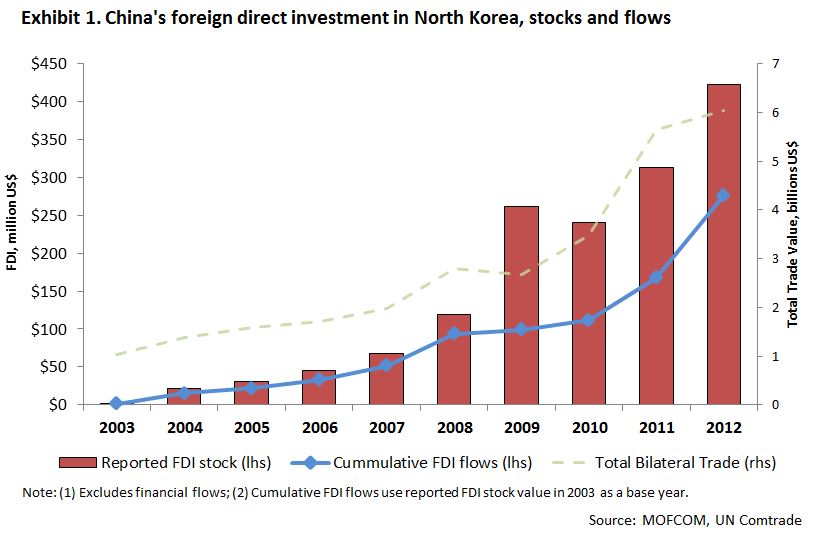 Exhibit 1 shows China’s reported stocks and cumulative flows (using 2003 as a base year) of outward FDI into North Korea. From very modest beginnings – a little over 1 million USD in reported stock of investment in 2003 – total FDI in North Korea rose to $422 million as of 2012. These numbers should not be taken as an indicator of the total stock of Chinese FDI in the country because we know that there was at least some investment prior to 2003. However, it can be taken as a trend indicator of flows and changes in stocks, on which we say more in a moment. As the supplemental green dotted line shows, investment broadly tracks total bilateral trade and is perhaps partly if not largely responsible for it; we know, for example, that raw materials exports account for a growing share of North Korea’s total exports.

As can be seen by the blue line, however, there is a discrepancy in MOFCOM data between the cumulative FDI flows and the stock measures; put differently, flows do not equal changes in stock. Theoretically, these two measures of FDI should be reconcilable: the stock position at the end of a period should be the sum of the stock at the beginning of the period plus flows during the period, as well as changes in valuation and other adjustments such as those that might arise from exchange rate movements. In practice, however, stock and flow data can differ for a host of more idiosyncratic reasons, including being culled from disparate sources with different accounting standards. (See a concise UNCTAD discussion of the issue here).

In the Chinese series, the changes in stocks track flows closely until 2009; again put differently, the stocks roughly equal cumulatative flows. From 2009-2011, however, stock measures increase much more dramatically than flows. At the moment we can only speculate why this might be. It is not clear if MOFCOM flow data takes into account reinvested earnings. If it does not, this could suggest there are reinvested earnings on profitable investments or forced reinvestment in projects from which Chinese investors are unable to repatriate profits or perhaps even capital. But in reality the discrepancies could be any number of things, since both the stock and flow data that MOFCOM report are very likely to have come directly from corporate reporting. It is also important to note that the aggregate data and the registry data in yesterday’s post both originate from the same reporting system at MOFCOM. As such, the limitations applicable to the registry data are also relevant to our interpretation of the stock and flow data.

Two official agencies in China report on Chinese FDI. One is the State Administration of Foreign Exchange (SAFE), which takes the balance of payment approach; the second is the Ministry of Commerce (MOFCOM), which collects information directly from companies. SAFE only provides information on aggregate outflows per year, with no detail on partner countries. SAFE data does not match the MOFCOM data perfectly, but is broadly consistent.

The MOFCOM data provides more detail, but is at the mercy of the accuracy of companies’ reporting.

It is not entirely clear how MOFCOM calculates its flow and stock data and what adjustments if any are made from corporate reporting. The reporting forms companies fill out require firms to report both flow and stock data, but it is unclear whether companies have incentives to over- or under-report one or the other measure. One should also keep in mind that, even with China’s highly capable bureaucratic machine, there will be investments (often small) that go completely under the radar, especially if investors can circumvent capital controls and access foreign exchange outside the official channels; again, this comports with the findings of the Haggard-Noland firm level surveys.

Weiyi Shi is a Ph.D. candidate in the Department of Political Science, University of California, San Diego, and completing her dissertation on the political economy of Chinese outbound direct investments.