Chinese Investment in North Korea: Some Data (Part I)

Weiyi Shi and Yuye Yan have generously helped us pull together public Chinese data on the PRC’s foreign direct investment (FDI) in North Korea. In today and tomorrow’s post we summarize the available information, as well as provide the usual notes on data constraints.

China’s Ministry of Commerce (MOFCOM) requires all Chinese firms investing abroad to register those investments with the ministry. The MOFCOM database currently lists over 30,000 investments, including 187 investments in North Korea, from November 2003 through May 2014. The information includes:

Registration with MOFCOM comes in two flavors: certain projects need to be approved by MOFCOM and other Chinese authorities prior to being launched (he zhun 核准); and others only need to be archived or registered after the fact (bei an 备案) in the MOFCOM system. Until now most projects have been subject to approval, and the archival approach is only beginning to be implemented as China further liberalizes outbound FDI. Going forward, approval will only be required for projects that exceed a certain investment amount, in natural resources, directed to countries that do not have diplomatic relations with China, and to certain other countries and regions determined jointly by MOFCOM and China’s Ministry of Foreign Affairs. Investments in the DPRK to our best knowledge fall in this last category and will continue to require approval.

The “registration” column signals some of the constraints on the data. In some cases, registration with MOFCOM precedes registration in North Korea, in some case it follows. However, these differences are not idiosyncratic to North Korea; these discrepancies and absence of reporting on national registration exist for other countries as well. An additional caveat is that we don’t know how frequently and accurately the registry is updated. Although companies are supposed to report any changes in the scope of business, enforcement is questionable, and we cannot be certain whether a “registered” investment comes to fruition.

Another major constraint is that, although companies are required to describe many aspects of their investments to MOFCOM, the size of either commitments or of actual capital flows are missing; both a large mining venture and a trading company appear as individual entries.

Nonetheless, there is some information to glean here. The dataset begins in November 2003, although we know from our own firm surveys that some firms invested in North Korea prior to that time. Exhibit 1 shows a surge of investments in 2006, a falloff of new projects in 2007-8 and then a steady increase in the number of registered projects since 2009 (2014 data, which goes through May, looks on-course to exceed 2013). 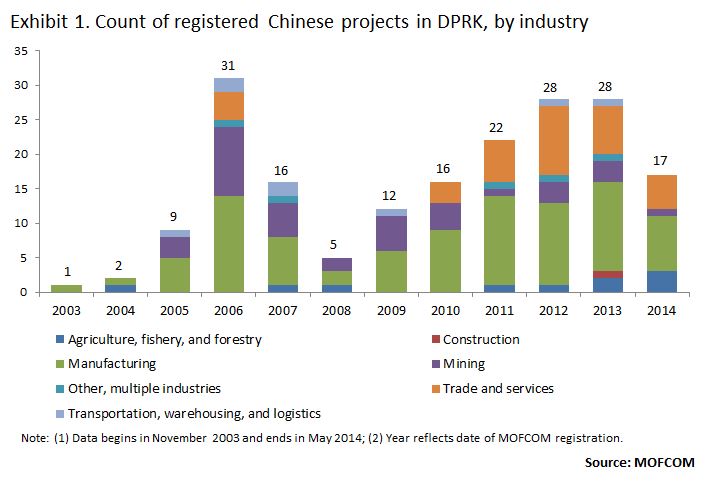 Exhibit 1 also identifies the project by broad sector. Manufacturing projects dominate (49% of overall investments) and the timing of the entry of these projects broadly mirrors trends in the overall data. Mining is the second most frequently-reported sector (20%), followed closely by a segment that has seen a particular upturn in recent years: services and trade (19%). Interestingly, services and trade-related investments increase in number after 2009, which is broadly consonant with the sharp increase in bilateral trade flows at that time as well.

Finally, from exhibit 2 below, we can track the provincial origins of these Chinese firms. Not surprisingly, investment in the DPRK appears strongly correlated with physical proximity to the border: firms from contiguous Jilin and Liaoning make up nearly 70% of the overall investments.

An important finding is that there is only one centrally-administered SOE listed in the MOFCOM database. This comports broadly with our findings from firm-level surveys that the relations between Chinese firms and the DPRK are surprisingly commercial in form. 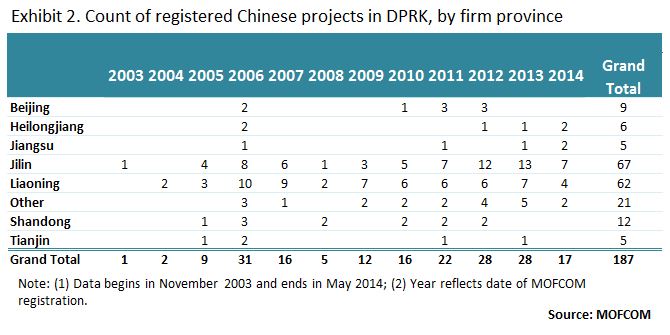 Tomorrow, we look at separate reporting from MOFCOM on outward FDI stocks and flows into North Korea.

Weiyi Shi is a Ph.D. candidate in the Department of Political Science, University of California, San Diego, and completing her dissertation on the political economy of Chinese outbound direct investments.