Why China Does Not Need to Worry About Japanese QE

Recently there has been a growing concern among some inside and outside of China about the impact of the Japanese quantitative easing program on the Chinese economy. In the Financial Times, David Li wrote that “China has become the de facto shock absorber for Abenomics.” These fears are misplaced.

The April edition of the IMF's Asia Pacific Economic Outlook identified two potential spillovers of Japanese QE into other Asian economies: financial spillovers and trade spillovers. Neither of which are necessarily bad for China.

First, there is concern that monetary easing in Japan could lead to volatile capital inflows into other Asia economies. Some suggest China could be among the most vulnerable. The RMB is the fastest appreciating currency in Asia this year, rising by 1.4 percent against the dollar as the Japanese Yen has depreciated by 10.8 percent. Inflation remains relatively low. And China’s interest rate – using 10-year government bond yields as a benchmark – is among one of the more attractive returns in the region. 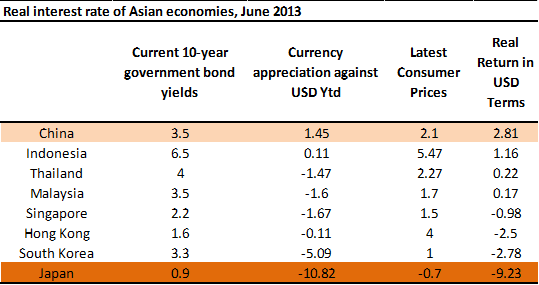 But the fear of speculative capital inflows into China are inflated. China’s State Administration of Foreign Exchange (SAFE) controls the size and direction of cross-border capital flows. Short term foreign capital investments are controlled with the QFII and RQFII programs. These programs have grown rapidly but remain a minimal 0.9 percent of Shanghai and Shenzhen market cap. In addition, the Peoples Bank of China (PBC) and the State Council remain committed to macro-prudential controls implemented in 2010 to control property prices, limiting the effect of speculative capital flows on this sector.

This does not mean China is invulnerable to speculative capital inflows. SAFE has recently stepped up measures to control illegal capital inflows into the country in the form of inflated export invoicing. In addition, although the PBC has tools to deal with excess liquidity created by capital inflows/outflows by taking actions in the repo market or even raising reserve requirements or central bank bills, uncertainty regarding foreign liquidity flows can complicate monetary policy objectives. For example, some have suggested the recent liquidity shortage in the interbank market may have been a result of an over-estimation of foreign capital inflows. Yet China is still better placed than many other Asian economies to deal with such concerns.

Second, trade spillovers for China are limited if not positive. There is concern that the side effect of Japanese QE - a weaker yen - could undermine the competitiveness of direct competitors for exports of final goods. China has made a concerted effort to push into higher value-added segments such as automobiles, shipbuilding, steel, transport equipment, and heavy machinery. The IMF’s export similarity index shows that in 2008 Japan ranked seventh on the list of Chinese export competitors up from 25th place in 1995. But Japan is not yet a direct competitor to Chinese exports. China's more direct competitors are Malaysia, Thailand, and Italy. If anyone should be concerned about the affects of Japanese monetary easing it should be South Korea, a direct competitor to Japanese exports. 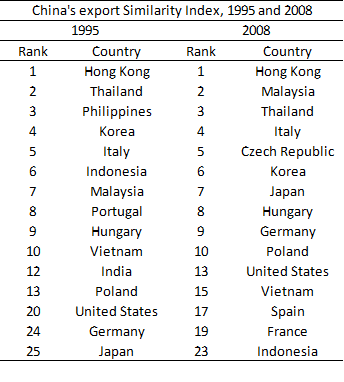 The net result of Japanese QE could in fact be positive for China. Japan is the third largest consumer of Chinese exports after the United States and the EU and recent weakness has impacted China’s overall export profile. Chinese exports to Japan fell by an average of 8.8 percent since the beginning of 2012. If monetary easing were to restore demand in Japan, this could stabilize China’s weakening export growth. In addition, for countries (like China) that import intermediate goods from Japan, the weaker yen would help increase profits for Chinese exporters. An IMF paper on changing global trade patterns showed that Japanese value added contributed the most out of any single foreign country to Chinese gross exports, adding 4.7 percent of value added in 2005.

The greatest risk to the region is not Japanese QE but China’s slowing investment growth. In November of last year an IMF working paper on over- investment in China found that the country would need to lower its investment by 10 percent of GDP in order to bring investment growth back to “normal” levels and support rebalancing. If the pace of this slowdown in investment demand is not managed well, it will have a significant impact on existing Asian exporters to China. The IMF found that if Chinese domestic fixed asset investment were to slow-down by 10 percentage points, Asia’s output would fall by .5 to 2 percent. And Japan – a major exporter to China - would be among the hardest hit with real GDP declining by 2.28 percent two years out.