An Urgent Need for the “Visible Hand” in China

I. China’s economy with undercurrents flowing beneath

The Chinese economy is now in a very difficult situation

At the micro level, economic deceleration was indicated by contracting production, falling profitability, drained liquidity and lackluster demand for enterprises along the supply chain. In the upstream, massive loss was commonly observed in the ferrous metallurgy industry; steel enterprises occupied 7 of the top 10 listed firms with largest loss in 2012 with average loss of RMB 4.8 bn. For manufacturing enterprises in the middle of the supply chain, Manufacturing PMI has been hovering slightly over the cutline of 50 for one year, while the small enterprise subcategory of Manufacturing PMI fell into contraction in April 2012 and never returned to expansion territories. The retail and service sector in the downstream decelerated as well. As a result of contracting production and falling profitability, in 2012, above scale industrial enterprises only recorded net profit of RMB 5.56 tn, a 5.3% YoY growth compared to 25.4% YoY in 2011; profit of SOEs declined by 5.1% YoY. Three SOEs including Cosco, Chalco and MCC registered the highest losses among listed firms, reporting RMB 9.6 bn, 8.2 bn and 6.9 bn losses respectively.

Accounting for 60% of the total economy, 50% of government tax revenue and 80% of employment, small- and medium-sized enterprises (SMEs) in China have been facing rising difficulties that evolved into a life or death issue during the past year. The small enterprise subcategory of Manufacturing PMI fell into contraction in April 2012 and never recovered amid lackluster foreign and domestic demand and limited funding support. According to statistics, only 20% of SMEs are able to get their loans approved from banks.

With higher credit ratings amid implied credit endorsement from the government, SOEs and infrastructure projects from local governments took a large amount of loan quota and as a result SMEs all over the country, especially those in the Yangzi River Delta and the Pearl River Delta, encountered serious problems of drained liquidity. Under the current prudent monetary policy, it becomes more difficult for risky SMEs to roll over their loans and as a result of the liquidity issue, some of them had to reduce their production. In 2012, the number of above scale enterprises in Wenzhou that reduced or stopped production during the year was 60% higher than that in the year of 2011.

Besides, the commonly existing credit guarantees among SMEs may trigger a chain reaction when one firm encounters a liquidity problem. Co-guaranteed loans make it easier for SMEs to obtain loans at a lower cost, but it would also affect other firms along the guarantee chain when one or several firms file for bankruptcy, which would worsen the already tight liquidity conditions in SMEs. According to the Zhejiang 2012 bankruptcy trial report, bankruptcy cases in Zhejiang totaled to 143 in 2012, grew by 85.7% comparing to 2011. 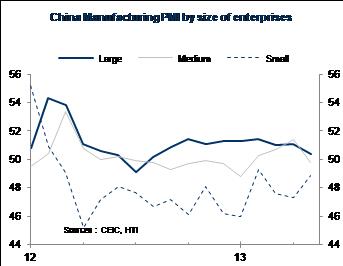 Funds arbitraging in capital markets rather than entering the real economy

Since 2010, as the credit crunch broadened under a prudent monetary policy, shadow banking received a boost in China. On one hand, with limited funds flowing to SOEs, it was difficult for SMEs to get access to bank loans and only 20% of them received approvals from banks. On the other hand, with rising requirements on capital adequacy by Basel III and policy orientation towards intermediary businesses by regulators, off-balance sheet businesses and interbank businesses became crucial to the profitability growth for banks. Since 2011, headed by Industrial bank and Minsheng bank, the size of the interbank businesses of 16 listed banks has grown by more than 100% with 41.5% geometric annual growth rate amid only 31% GAAR of loan size during the same period. The outpacing interbank business indicated that most of the new funds were circulating within the interbank market rather than supporting the real economy.

The size of the rapidly growing shadow banking sector is estimated to be RMB 20-40 tn, larger than half of the GDP. Three major outflows of shadow banking, namely the real estate industry, local government financing platforms and SMEs, have been experiencing financial difficulties this year with an increasing number of credit issues. The real estate industry has long been a major client of banks, but they have been negatively impacted by high yield trusts as SPVs gradually turned into Ponzi schemes with falling profitability, strong wait-and-see sentiment in the market and rising risk amid continuous tightening measures and the incoming property tax scheme.

With a RMB 4 tn stimulus package, bank loans to local government financing platforms is now over RMB 10 tn with the repayment peak incoming in 2012 and 2013. As land financing is no longer an option, local governments are having a hard time with decreasing revenue. Falling profitability in SMEs was commonly observed amid lackluster domestic and foreign demand. Problems in these three traditional outflows worsened the liquidity and profitability of banks, pushing them into the interbank market to keep their accounting books balanced, which greatly increased the vulnerability and volatility of banks. An overshooting SHIBOR rate at the end of June illustrated an example of how a single bank’s default could lead to a systematic fluctuation.

Currently, there is a view that a moderate slide of economic growth is acceptable as China’s economy would be able to self-adjust and self improve its structure in a moderate slide. This view is too optimistic as it would be difficult for the economy not to decline further, or to pick up from the bottom in the absence of supportive fiscal and monetary policies, while adjustment and structural reforms would be much easier in the expansion.

Small-medium sized enterprises can hardly make it through due to lack of new orders and liquidity. The current problem in China’s economy is not caused by simple overcapacity but a series of structural mismatches, which require structural and institutional reforms to address. The market alone is incapable of accomplishing this adjustment without policy orientation and support. Tiding over the economy with a supportive stimulus policy and market orientation, would bring much smaller impact on the employment situation and social stability than the simple “free fall” and grow method.

Domestic monetary policy should be accommodative amid global excess liquidity

The US, EU and Japan are now all in a position of excess liquidity as their central banks have implemented quantitative easing plans that led to a depreciation of domestic currencies and overflow of capital among markets. The appreciation of the RMB has negatively impacted China’s exports, and actively increasing liquidity and orientating capital towards emerging industries with policy support would be more appropriate than passively defending the hot money.

After the transition into a new administration, China’s new leadership has brought a number of thoughts on the future development of China, yet misunderstanding is common across different levels of the government in terms of implementation. A detailed industrial policy that carries a clear message would optimize capital and resources allocation and orientate them to emerging industries. It is important for China to understand global economies, identify emerging industries, “orderly” transfer low end production to neighbor countries, and use economic leverage to build a new foreign policy framework.

The China's economy is in danger after over a year's fall, and thus supportive measures are urgently needed. Economic growth is now in a downward trend, which may become self-reinforced and spin out of control. However, immediate and appropriate policy measures may alleviate the market pressure and offer support to the real economy. The costs of bailing out will become much higher and the process much harder if support is postponed, as the downward inertia continues to enlarge.

Yifan Hu is chief economist and head of research for Haitong International and a visiting fellow at the Peterson Institute for International Economics.