Over the last two years, commentators and Chinese economic observers have expressed concern over “excessive” credit growth in China, which also led to downgrades of China’s ratings and warnings by some financial institutions. Standard and Poor’s downgraded China’s sovereign credit rating last year, in the belief that the strong credit growth had increased China’s economic and financial risks. The International Monetary Fund (IMF) in its 2017 Article IV Consultation last August warned China over the dangerous levels of debt, predicting that nonfinancial sector debt would rise to almost 300 percent of GDP by 2022.

Nicholas Lardy, Anthony M. Solomon Senior Fellow at the Peterson Institute for International Economics (PIIE), took a different view, however. As early as March 2017 he said that the financial risks in China were overstated, and in the fall of 2017 noted that China’s leadership was aware of the risks and taking steps to slow the growth of credit. The Bank for International Settlements statistics (updated in March 2018) confirms Lardy’s judgment: Chinese nonfinancial corporate credit declined from its 2016Q2 peak of 166.9 percent of GDP to 162.5 percent by the end of 2017Q3 (see figure 1). 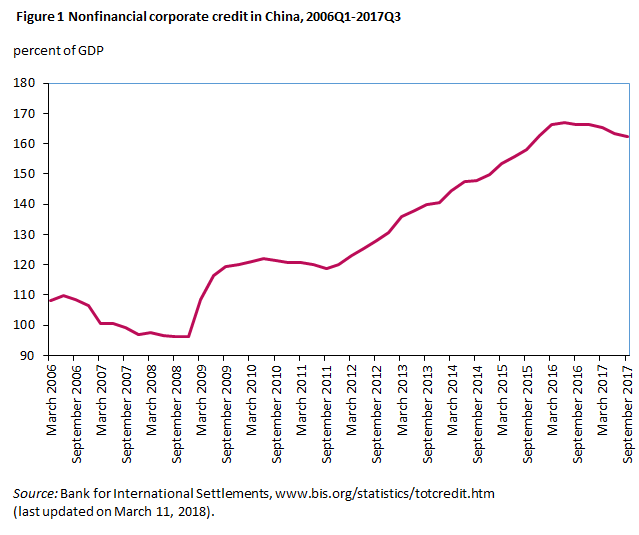 Moreover, as Lardy has been arguing for several years, economic growth and rebalancing are continuing. China’s GDP grew 6.9 percent in 2017, reaching RMB82.7 trillion. On the expenditure side, final consumption has played an increasing role, contributing 58.8 percent of GDP growth. On the production side, services have become the main driver of economic growth. The value-added of the service sector as a share of GDP was 51.6 percent in 2017. These positive developments are far from the “hard landing” anticipated by bearish commentators over the past three years, many of whom predicted that the economy was due for a crash because of rapid credit growth. Many commentators cited China’s stock market turmoil as a cause for alarm, asserting that capital markets were responding to a Chinese financial and economic meltdown. It was also widely presumed that China’s decision to depreciate the renminbi exchange rate was motivated by a desire to encourage exports. There was also concern about the decline in China’s foreign exchange reserves.

In fact, contrary to what most prognosticators anticipated, the Chinese economy still grew relatively fast despite the stock market turmoil, just as Lardy and a few others argued at the time. The Chinese government’s intention in depreciating the exchange rate was not to support exports and the overall economy, as Lardy had noted; rather, Chinese policymakers were attempting to adhere to IMF guidelines to let the exchange rate be driven by market forces in order to have the renminbi added to the special drawing rights (SDR) basket of the IMF. In general, the judgments and predictions of most commentators and observers overlooked the true condition of the Chinese economy and the reasons underlying policymakers’ actions at the time.

Lardy’s analysis also differed from what some commentators were saying about the level of Chinese foreign exchange reserves. For example, when the reserves declined in 2015 and 2016, Kyle Bass, founder and principal of a Dallas-based hedge fund, argued that China was depleting its foreign exchange reserves and that the renminbi would depreciate more than 30 percent against the US dollar. Lardy disagreed, citing other factors at work. In his 2016 Spring Global Economic Prospects presentation at PIIE, he pointed out that a third of the decline of foreign exchange reserves came from the 10 percent appreciation of the US dollar, which reduced the dollar value of China’s reserves held in the form of sterling-, yen-, and euro-denominated assets. About 40 percent of the decline, he noted, resulted from Chinese corporates repaying foreign-currency debt, and another chunk of the decline was due to foreigners reversing carry trades. All of these were self-limiting, and thus the market was unlikely to force a large currency depreciation. China’s foreign exchange reserves stabilized shortly thereafter at about $3 trillion, and the renminbi exchange rate also stopped depreciating.

Lardy’s predictions are not always more positive than the consensus. Analyzing the Chinese economy in 2018, he expressed concerns over the resurgence of the state and the reform of Chinese state-owned enterprises (SOEs), citing policies on mixed ownership, corporatization, and mergers and acquisitions (M&A) decided by the State-Owned Assets Supervision and Administration Commission of the State Council (SASAC). Lardy is not optimistic that these policies will enhance the economic performance of SOEs.

For several years, Lardy has called on Chinese policymakers to fulfill their promises to “let the market play a decisive role.” In his writings for PIIE and in a forthcoming book, he recommends that private firms be allowed greater access to the market, particularly in the services sector. He argues that China needs more market-driven M&A, rather than M&A orchestrated by SASAC, and enterprises that are performing poorly should be allowed to fail. There is evidence that Chinese authorities do realize that the problem of zombie enterprises—firms incurring persistent losses and paying interest at below market rates—is becoming increasingly severe. But Lardy is calling on China to make greater efforts to reform SOEs in the future.