Too Big to Fail: Deposit Insurance and Chinese State Banks

Chinese banks are often described as “too big to fail” in part because the government has implicitly guaranteed the entirety of the money Chinese savers put in banks. The government set this precedent in 1998. Hainan Development Bank failed due to a real estate market collapse. At the time the bank’s deposits only accounted for 0.06 percent of all deposits in China. But the People’s Bank of China still bailed out all depositors when they transferred the failed banks liabilities to ICBC. They were concerned that anything short of a complete bail out of depositors could have led to bank panics throughout the country.

Explicit deposit insurance only reimburses a limited amount of deposits in the event of bank failure but provide a better hope of financial stability in crisis. Typically a fund is created and filled with premiums paid by banks on covered deposits. The fund ensures the government has the cash on hand to rapidly close a struggling bank and bail out depositors, thus preventing one isolated banking failure from causing bank runs across the country.

The U.S. was the first country to launch a deposit insurance scheme in 1934 to restore confidence in the banking system during the great depression. Since then, 111 countries have adopted explicit and limited deposit insurance. China remains an outlier.

The State Council and the PBC aims to move ahead with incremental market reforms to the banking system (such as deposit interest rate liberalization) this year. It is concerned that rising competition for deposit interest rates will drive depositors away from China’s 198 small and medium sized depository institutions into five large state owned banks. China has made great in roads reducing the share of deposits held by the largest five state-owned banks from 71.1 percent in 2002 down to 51.3 percent in 2012 but depositors still view these banks as too big to fail. The People’s Bank of China believes the risks of rising interest rate competition for small and medium sized banks could be mitigated with an explicit insurance program design to reimburse depositors in the event of bank failure.

Any explicit deposit insurance scheme will certainly be less than what depositors expect and it could be difficult to convince depositors that deposits in large state commercial banks are just as safe as city commercial banks or rural commercial banks. For example, if launched in 2003, a deposit insurance fund equal to 1.35 percent of all deposits (the same coverage target as the federal reserves) would have taken 10 years and cost Rmb 1.1 trillion. The ROA of the domestic banking sector would have dropped 14 percent from 1.13 to 0.97 percent as a result. The fund would then be large enough to cover the failure of larger city commercial banks, like Bank of Beijing, but still not be enough to cover a bank the size of China Minsheng Bank with deposits accounting for 2 percent of the national total. Let alone enough to cover one of the big four like China Construction Bank with deposits accounting for 12.2 percent of all deposits in the banking system.

Some investment banks speculate China could get around this program with deposit insurance coverage more limited than most countries. Barclays believes that the central bank will cover all deposits at or below Rmb 500,000 or 99.7 percent of all deposit accounts as of 2005. Many countries have a deposit insurance scheme covering a similar share of deposit accounts but few countries have accounts as large as China. Chinese bank accounts at or less than Rmb 500,000 only represent 46 percent of the value of deposits. The close equivalent to this is Mexico where 99.9 percent of deposit accounts are covered but this only accounts for 58 percent of the value of all outstanding deposits. If this were the coverage level for China over 50 percent deposits today would no longer be insured. 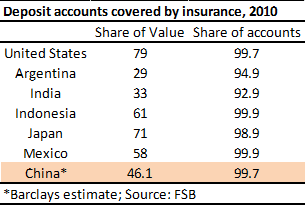 The low coverage level would make it easier to launch a credible deposit insurance fund. If China follows a path similar to that of Argentina with a premium rate of 30 bps and a fund target of 5 percent of all covered deposits, they could have a fund capable of covering bankruptcy of one of China’s large state-owned banks in 20 years. The pace could be even faster if the Ministry of Finance injects start-up capital into the fund.

But what would happen to the banking system as a result of the low coverage? It is unclear who holds accounts in individual banks larger than Rmb 500,000.  China has large income inequality with some wealthy holding large amounts of money in bank accounts. Due to financial market distortions favoring real estate, the middle-class also traditionally saves large sums of money in order to afford purchasing a home with little or no down payment. Even more likely are enterprises. Non-financial enterprise deposits accounted for 35 percent of the value of all outstanding deposits in 2012.

If high net-worth individuals and enterprises remove their funds from the banking system in response to the change in coverage rules, then all banks could struggle. Even with a low coverage rule banks are going to be negatively impacted by deposit insurance. Barclays estimates that with only a 0.5 percent reserve target and an 8 pbs premium on covered deposits, China Minsheng Banks profits would fall by 1.15 percent in 2014. The effect would certainly be worse if banks also had to contend with an eroding deposit base.

These are some of the concerns that have kept an explicit deposit insurance scheme stuck in the mud for two decades, but there is a way forward for China. In the past, countries have managed to phase into a limited deposit insurance scheme over time by gradually reducing coverage. Japan moved in and out of full guarantee deposit insurance in response to crisis between 1996 and 2002. But it was done so gradually first for time deposits then for ordinary deposits. Alternatively, China could take the path of Indonesia and charge an additional premium to the depositor for all deposits over Rmb 500,000.

Whatever the steps for deposit insurance in China, the plan will be carefully timed and gradually implemented.  The People’s Bank of China and the State Council have put deposit insurance on the agenda for financial reform for this year but no details have been released. When announced, we should only expect a gradual phasing in of a multi-year plan. China’s banking system is simply too big to risk failure.

Europe's Half a Banking Union