Over the past decade, China’s bank-dominated financial system has rapidly been transformed into a more diverse system where nonbank financial institutions and capital markets play a large role. Trust loans, entrusted loans, bankers’ acceptances, corporate bonds and equity issuances now account for a large portion of financing to the real economy, a stark contrast with earlier periods when traditional bank loans were close to 100 per cent of all financing.

There are, however, serious concerns that the trend of financial development in China has been sub-optimal. The most rapidly growing components of the financial system have been those associated with the shadow banking system, while the share of direct finance in China remains relatively low.

However, the Chinese share of direct finance is even lower than other emerging markets such as India and Indonesia. The Chinese government has had the goal of increasing the country’s proportion of direct finance for more than a decade. In May, the State Council released a new policy document on capital market development that once again reaffirmed this goal. 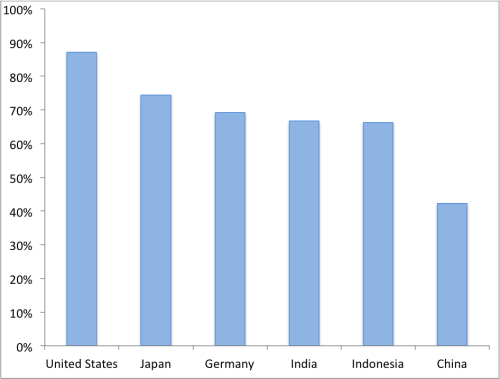 Is increasing the share of direct financing in the economy a worthy goal for Chinese policymakers? The economic literature on the subject is mixed. There is little in the way of strong evidence that bank or market-based (ie, direct) financial systems are more advantageous to economic growth.

Chinese equity markets are also relatively large. With stock market capitalization greater than 40 per cent of GDP, the size of China’s equity markets is broadly similar to that of other Asian emerging markets.

If China’s capital markets are not small, what accounts for the low share of direct financing? This is primarily a consequence of the enormous credit boom of the past several years. Between the end of 2008 and the end of 2013, China’s stock of credit increased by an amazing 187 per cent. For comparison, GDP only increased by 81 per cent during the same period. The growing credit intensity of growth was driven mostly by indirect financing instruments.

The sources of the credit boom are complicated, but stem primarily from interest rate distortions that push down the cost of capital. Faced with low borrowing rates, Chinese corporations and household have increased their borrowing significantly in recent years. China’s capital markets have also grown during this period, but not at a rate that is significantly faster than the rest of the booming financial system. Therefore it is little wonder that the direct financing share remains low.

Rather than stimulating capital markets to grow even faster, it would be better to focus on improving their ability to serve the real economy. China’s capital markets currently allocate credit in a manner that is biased in favor of state-owned enterprises. The Chinese private sector accounts for two-thirds to three-quarters of all economic output. Yet private sector firms account for a disproportionately small share of the capital markets.

In the corporate bond market, private enterprises only account for 10 per cent of the total amount outstanding. The situation is only marginally better in the equity markets where state-owned enterprises account for 70 per cent of the market capitalization of listed A-share firms. Access to capital markets for private firms has been improving in recent years, but there is still far more room for improvement.

Regulatory barriers and shortcomings prevent China’s capital markets from functioning as effectively as possible. China’s bond market is governed by three different regulators and split between the interbank market and the exchanges, leading to confusion and conflicting policies. Moral hazard is ripe because the China Securities Regulatory Commission (CSRC) has been reluctant to let any bonds fail. The default of Chaori, a solar company, earlier this year was remarkable as the first domestic bond default in Chinese history.

The equity markets have been hamstrung by overly restrictive rules on new listings that have led to a long backlog of companies seeking to go public. Restrictions on foreign ownership have pushed many of China’s most promising companies, such as Alibaba, to list on foreign stock exchanges. Price discovery is damaged by government guidance to SOEs and banks to purchase stocks in an effort to bolster share prices. Investor confidence is weak due to numerous insider trading and corporate governance scandals, despite numerous regulatory initiatives over the years to address these problems.

The composition of investors in Chinese capital markets also limits the development potential of these markets. State-owned commercial banks are the largest purchasers of corporate bonds, via the medium-term note market. Their tendency to buy and hold means that the secondary market in China is undeveloped.

Foreign investors are limited to the QFII and RQFII programs. While the quota amounts for these programs have increased in recent years, foreign holdings of Chinese securities remain extremely limited.

Retail investors play a large part in the Chinese stock market, but millions have fled the market after years of excessive volatility and disappointing returns. These factors have meant that the Chinese government plays a disproportionately large role as an investor in the capital markets, limiting their development as independent and efficient markets.

China’s capital markets have an important role to play in the country’s economic development. However, until Chinese capital markets become more effective in serving the real economy, there is little reason to believe that boosting their share of the financial system will have much benefit.

The methods for improving China’s capital markets are clear: increasing access for private enterprises, reducing regulatory barriers, and diversifying the types of investors. These should be among the top priorities for China’s next wave of financial reform.

This article originally appeared in The Business Times.