There has been a lot of debate lately about China’s foreign exchange reserves, whether the People’s Bank of China has been intervening, and in which direction.  It appears from the data available that the PBoC has done little or no intervening in the exchange market.  Data released this week shows that the value of China’s FX reserves has dropped for the third straight quarter, this quarter by $113 billion.  But if you take into account that nearly 40 percent of its FX reserves are in non-USD currencies, and the relative weakness of those currencies versus the dollar, especially the Euro, then the real value of its reserves has not changed.  As shown in chart 1, when adjusted for foreign exchange fluctuations, implying that there has been little or no net intervention by the PBoC since the 2nd quarter of 2014 (shown by the red line), although there could have been modest sales and purchases of foreign exchange. 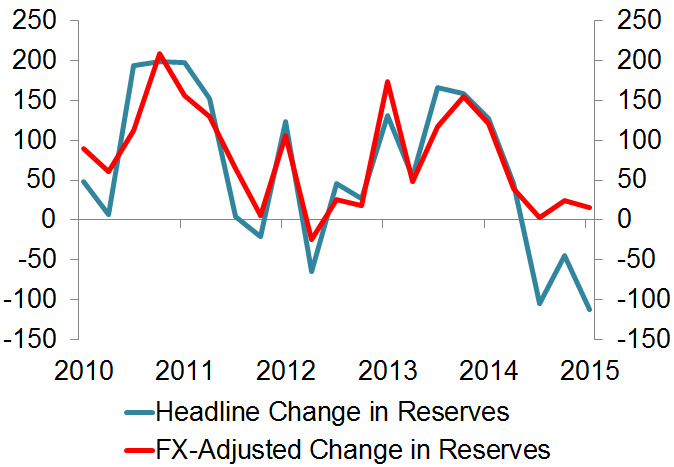 As we wrote about earlier, we don’t know the exact allocation of foreign currencies in China’s FX reserves, but as we’ve noted here, we can be somewhat confident that the non-US dollar portion is around 40 percent say 39 percent or around forty percent.  This means that non-US portion, of which around two-thirds is likely Euros, make it susceptible to fluctuations in the foreign exchange market.

Here we breakdown the currencies depreciation versus the dollar and look at a weighted average of the effect on the FX reserves.

This shows that the depreciation of the major currencies against the dollar has lowered the value of China’s FX reserves by approximately $122 billion, which is near the $113 billion drop from $3.84 trillion to $3.73 trillion this quarter.  The Euro has been the main cause of the drop, responsible for $105 billion.  Thus the difference is within a small margin of error, so we may conclude that there was little to no intervention this quarter.  This is in line with HSBC’s estimate that China’s intervention in the FX markets has been under $10 billion in the last two quarters of 2015.  This could indicate that the PBoC is serious about paring back chronic intervention in the foreign exchange markets and moving toward a more liberalized exchange rate.

Now a look at the official Treasury data on foreign holders of US securities, in February, Japan became the largest official holder of US assets for the first time in a long time, this includes treasury bonds, agency and corporate bonds, and US equities.  Looking at just treasury bonds, by far the biggest asset class, China’s official holdings have been basically flat around $1.25 trillion over the past year, actually coming down slightly.  Where it gets tricky is the unofficial holdings of US treasury bonds in authorized foreign places like Belgium. There was a more than doubling of US treasuries held in Belgium during 2013, an extra $180 billion or so, as you can see in chart 2.  This is likely from China and even the Fed wrote about it, but this stopped in 2014 and has even reversed trend since. 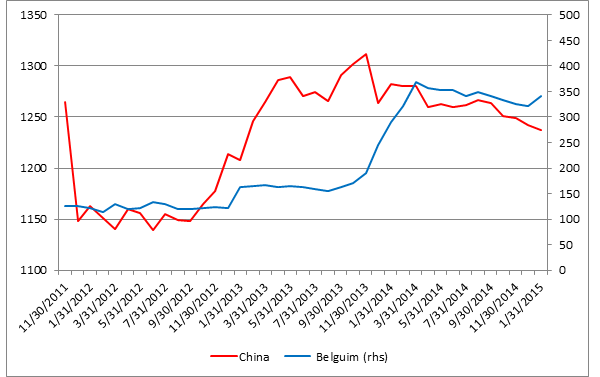 What this means for the future

The US continues to raise the issue of China’s FX purchases in bilateral meetings, with US Treasury Secretary Lew broaching the issue again on his last trip to China.  Although the most recent Treasury report on exchange rate policies acknowledged that China’s real effective exchange rate had appreciated by more than 10 percent, Treasury still said its currency was “significantly undervalued.”  The report also noted that the “real test of this commitment will be whether China refrains from intervening even when there is appreciation pressure on the RMB.”  This may be a double-edged sword, as what would happen if there is significant depreciation pressure on the RMB, and China refrains from intervening?

There have been bills in both the US House and the US Senate that would authorize the US to impose import tariffs on any country deemed to be a currency manipulator.  This is a very shortsighted effort to combat currency manipulation and may well be against the rules of the World Trade Organization.  There is also serious concern on how currency manipulation would be defined, and how one would calculate the damages from it.  A better way would be for the United States to focus on convincing China to increase transparency of its reserves, which President Xi has apparently done by announcing last November that China will switch to the IMF’s Special Data Dissemination Standard (SDDS), which calls for disclosing the composition of foreign exchange reserves.  Doing this would alleviate at least some of the suspicion and concern about currency manipulation.