This is part 2 in a series about China’s property market. See here for part 1.

The property market in China is clearly in a correction. As we showed in a previous post, price growth is deep in negative territory and all signs are pointing to further weakness ahead. This begs the question of whether or not the long-called-for-but-always-avoided hard landing in China could be on the cards. After all, was it not the combination of an overheated housing market and credit build-up that so recently brought low the United States and many other economies? In this post, we try to place China’s recent build-up in a historical context, looking at previous housing “bubbles” and their aftermath.

To start with, why do housing bubbles – and their subsequent crashes – have such deleterious effects on growth? Firstly, bursting property bubbles are not necessarily cataclysmic. But when they are, it is most often because for many or most households (especially in the developed world), a house is a substantial portion of their overall wealth. In their book “House of Debt”, Mian and Sufi take a close look at American households’ balance sheets in the lead-up to the financial crisis. For the bottom four quintiles of households by wealth in the US, housing made up at least 50% of net worth in 2007[1]. This, combined with high median loan-to-value ratios (not to mention widespread loss of employment), badly damaged household balance sheets and led to a protracted deleveraging process where consumers paid off debt, cut back spending, and boosted savings. That the distribution of losses as a percent of net worth disproportionately impacted the bottom 50% of households (as opposed to the dot-com crash) made the 2008 crisis so painful, especially for a consumption-led economy[2].

With this as our starting point, we took a look at 40 years of data for 23 (mostly developed) countries on housing prices, household credit, disposable income, and output to try and see if we can identify common characteristics of a crisis situation. We find that housing crises lead to more serious declines in output when there has been a rapid change in the composition of household balance sheets. A cut at this is looking at the changes in the ratio of real house prices to real household disposable income. In countries where this ratio increases dramatically and quickly – such as the Nordics in the mid-1980’s, Japan in the late 1980’s, and the recent cases of the US and European countries – growth enters a decline and deleveraging can be protracted. Interestingly, there are cases where this ratio increases and falls quickly, but impacts on output are limited and the overall recovery swift.

What accounts for this difference? First, we look to households. In Italy, following a large deregulation effort in 1988, property prices rose by over 60% in real terms in just under five years, while household disposable income increased by just 10% in that same period. But the fallout triggered by the ERM crisis was a brief recession in 1994 and a sharp devaluation of the lira, after which growth returned[3]. The answer can in part be found in the wealth of Italian households and their relatively high savings rates at the time; the net savings rate for Italian households was around 17% of disposable income in 1994[4]. The recent US experience stands in stark contrast to this. In 2006, real US housing prices were up by around 36% over a 5 year period, while real income growth was just 8%. American household savings reached an all-time low and, more importantly, housing leverage to income was most acute in the bottom half of the distribution. In Ireland, although real disposable income growth was very strong prior to the housing bubble peak in 2007, housing rose much faster on lower interest rates from the euro area accession, rapid deregulation in mortgage market, and households substituting savings for capital gains from housing (i.e. wealth effect).[5] Further, homeownership rates were very high in Ireland (86%) and, similar to the US, housing represented a significant portion of household wealth across the income distribution.[6]

To be sure, there are other factors that work to either mitigate or exacerbate housing crises such as demographics, foreign capital, credibility of official institutions, financial market performance, and pace/nature of regulatory changes. However, the balance sheet of the median household is critical in determining whether a deflating housing bubble metastasizes into a financial and economic crisis.

As many studies have found, it is difficult to generalize the proximate causes of economic crises. Varying catalysts notwithstanding, we find that housing busts are most often followed by sharp and/or protracted growth declines when increases in real housing prices have outstripped gains in real disposable income, when that demand is supplied by increases in household credit, when household savings are low and falling, and, to the extent our data allow[7], when household balance sheets are composed in large part by property (see exhibit 4 for select illustrations).

Turning to China, a small data note is in order. It is difficult to place China’s housing market in a longer historical context for the simple reason that the private property market for all intents and purposes did not exist prior to 1998. Furthermore, the price indices for property in China are very problematic: the longest series are on prices of newly constructed residential properties (i.e. not repeat sales), and the headline index of 70 cities treats all cities and properties the same. And most importantly, given how quickly new residences have been constructed as a percent of total floor space sold, there are very few repeat sales. This combined with the lack of hedonic indices that control for the changing quality, location premium, and other time varying factors makes it difficult to measure the value similar properties over time. Using the headline 70-city index, real property prices in China went up by just 21% from 2005 to 2010. We constructed another index however, which can account for some of the drawbacks of the headline index. We use data by province on floor space constructed and the average selling price per square meter in each province. We then reaggregate that into a single “national” index. Using this index then, real property prices went up by nearly 80%. We think this weighted index makes more sense to use and maps better to the data we see on the investment side[8].

Using this data, the five year increases in property prices in China would place them in the far right hand side of the distribution of 5-year changes in property prices (exhibit 1). But before drawing premature conclusions, we would recall that as important are household balance sheets. From 2005 to 2010, household disposable income grew by 99.7% in real terms. Therefore, increases in housing prices relative disposable income in China looks much less ominous, in relative terms (exhibit 2). The household savings rate, while leveling off recently, has remained elevated throughout the housing boom, standing at around 40% of disposable income in 2012 (the last year for which flow of funds data are available). While household debt has increased over the past 5 years, it is still extraordinarily low by international crisis standards, though this is an area to watch (exhibit 3).

Finally, China’s homeowners are unlike their pre-crisis western counterparts. The recent loosening notwithstanding, regulatory restrictions on homebuyers are extraordinarily tight. Therefore, those buying their first home still must put down at least 20%, but in some localities, the mandatory requirement may be up to 35%. That amount increases for secondary homes. This is in stark contrast to the lax standards on homebuyers in the US during the early 2000’s who, in some cases, were not required to have any payment.

Looking forward, there are still undoubtedly tremendous headwinds for the Chinese property market. The fall-out from the ongoing correction will likely fall largely on specific sub-industries that are heavily leveraged to the property sector. However, the all-important median household balance sheet remains in solid condition and has much figurative skin in the game in the form of high home equity-to-value ratios. Furthermore, marginal demand for goods and employment is increasingly driven by domestic consumption sectors such as services, thus the spillover from the industrial slow-down will be less than in previous episodes. These structural supports, combined with continued reforms and financial easing, lead us to continue to believe that the property market is in a protracted correction, but not the collapse foretold. 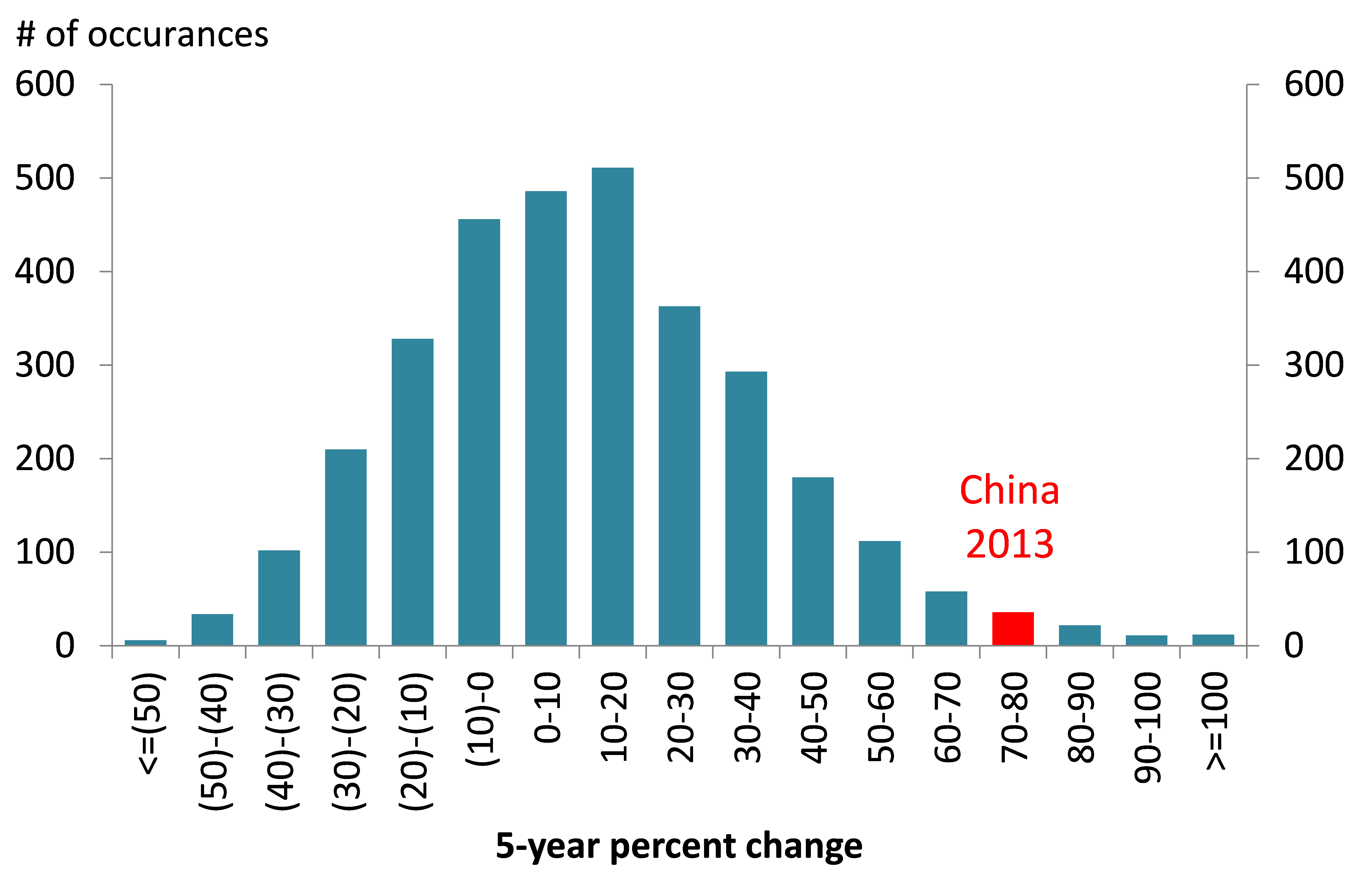 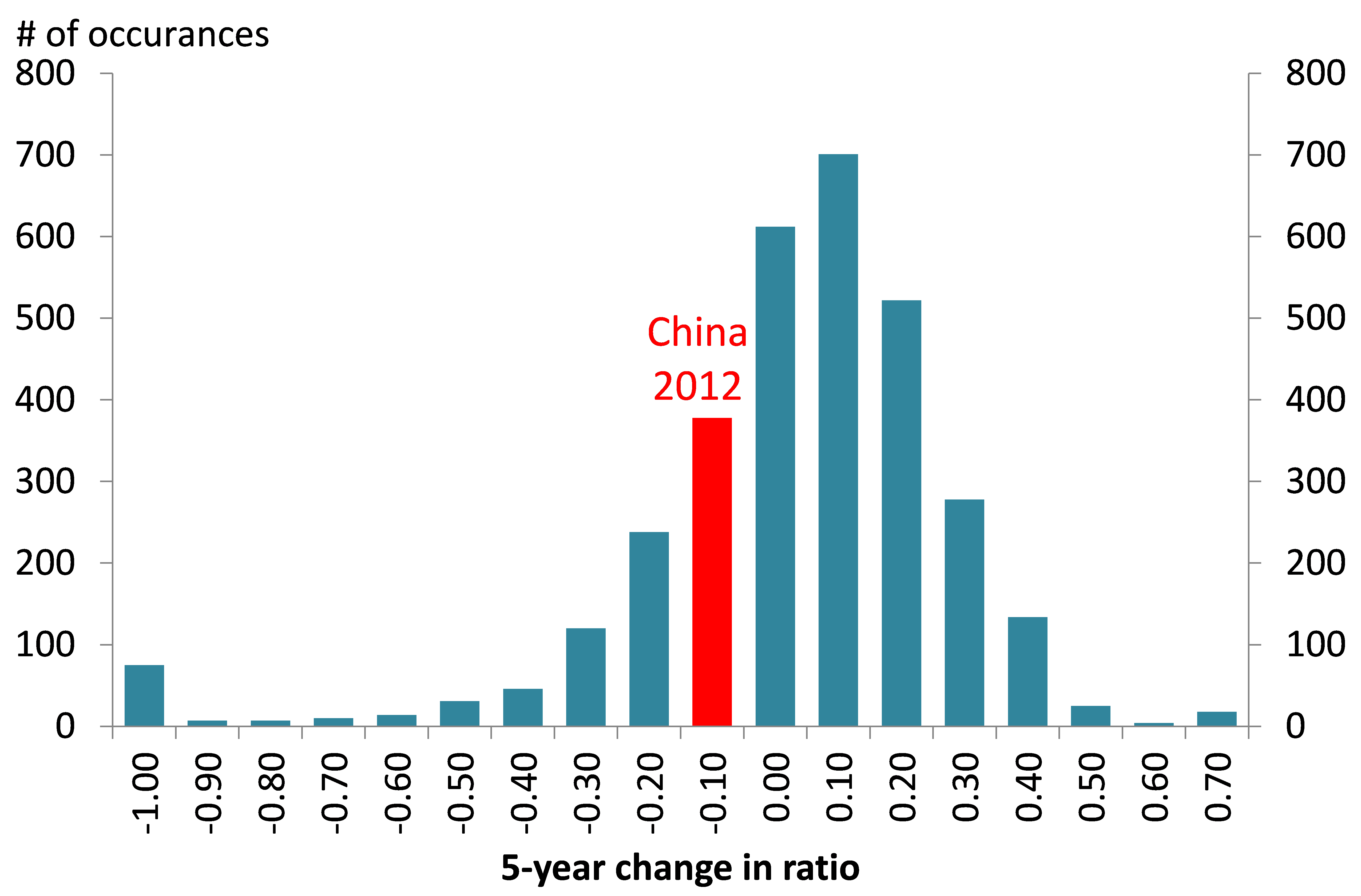 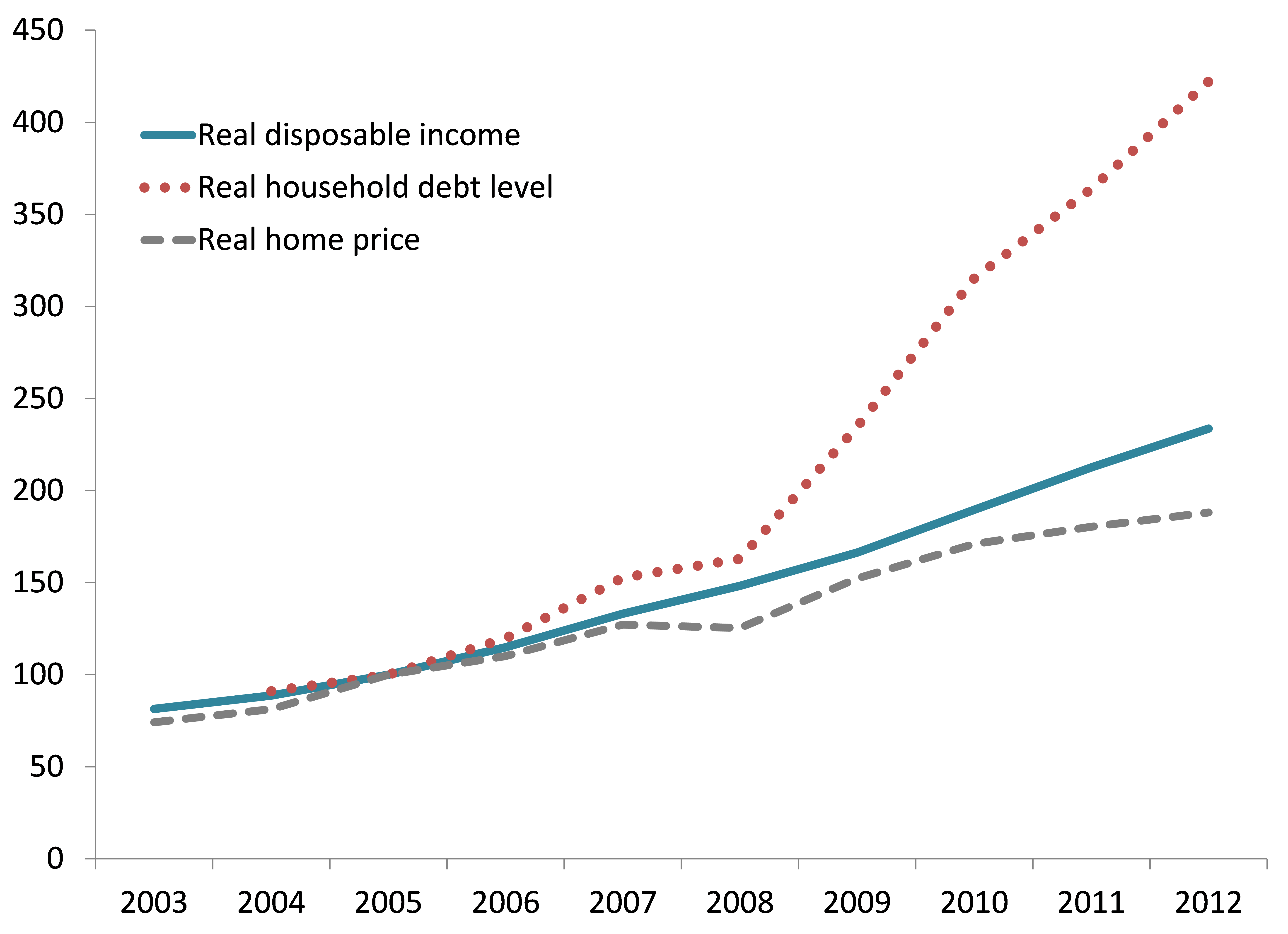 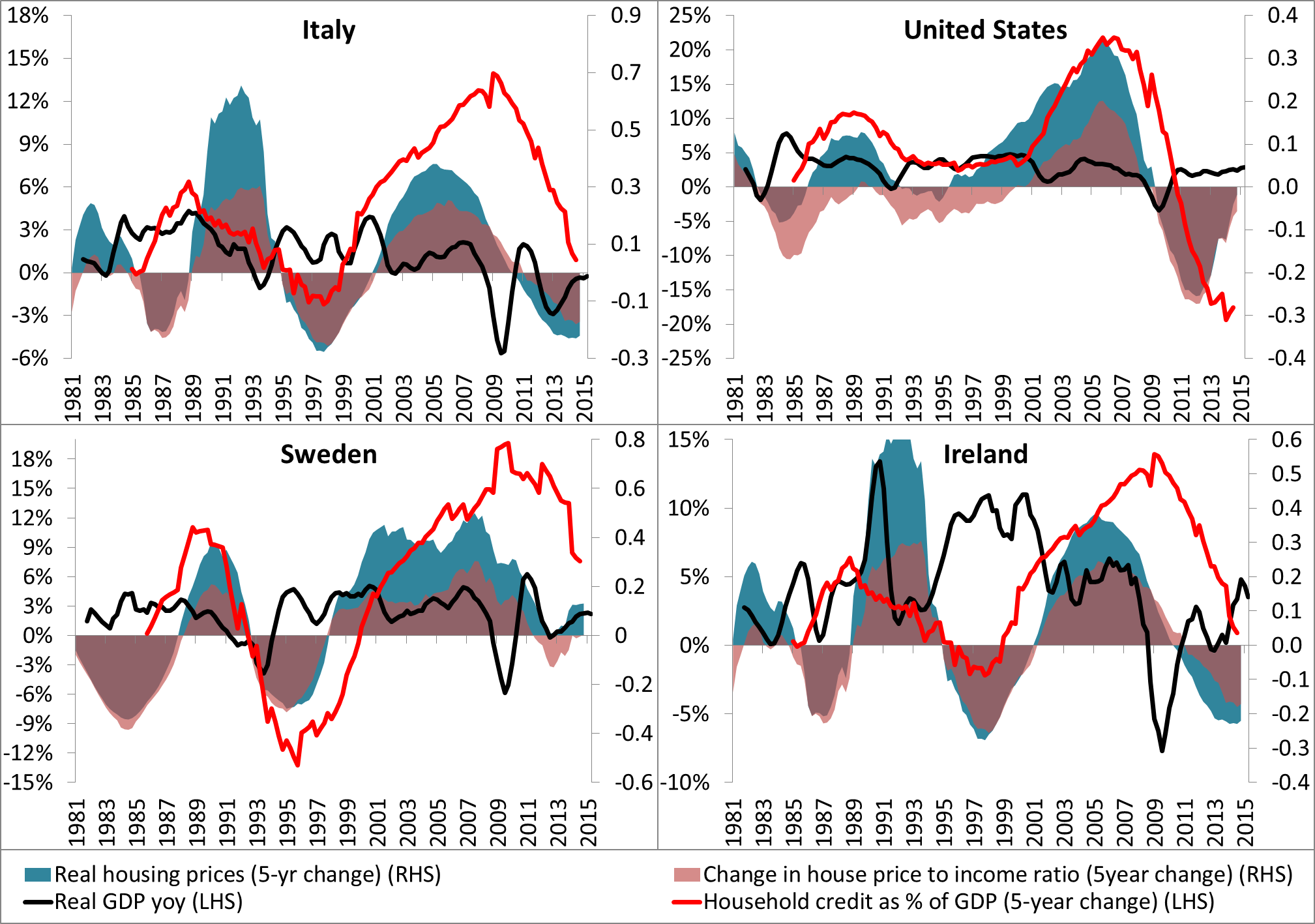 [1] See February 2009 Federal Reserve Bulletin “Changes in U.S. family finances from 2004 to 2007: Evidence from the Survey of Consumer Finances”

[7] Further efforts have been made in Schularick et al 2014 “No place like home: Global house prices, 1870-2012”, to construct long term international house price series, similar to that of Robert Shiller’s for the US.

[8] For an excellent review of the measurement issues, and an approach to constructing an internationally comparable index, see Fang et al 2015 “Demystifying the Chinese housing boom”