The “New Normal:” Employment Not Output In China

In the past the conventional wisdom was that GDP needed to grow at least 8 percent in China to generate enough jobs to absorb a growing labor force. As we have said before, this convention is changing, especially under the Xi and Li administration. China’s GDP growth has stayed below 8 percent for more than two years now. And to the surprise of many market watchers, the new Xi and Li administration have not only resisted investment-driven stimulus but tolerated slower growth. In May, President Xi Jinping called slower growth the “new normal.” The new administration is realizing that output targets are not necessary for meeting employment objectives.

Chinese leaders are content with the “new normal” because labor market conditions have held up well in the slowdown. Last November, Premier Li Keqiang said that his 7.5 output growth target is flexible provided employment growth remains stable.  Figure 1 shows the number of new urban jobs created continued to increase every year since 2009 even as output growth decline. For example urban employment growth in 2013 was almost a million more than 2011 even though GDP growth was down one percentage point. More important, China still has a large margin over its employment target. Last year, China added 13 million jobs well above the government’s target of 10 million jobs. This trend does not appear to be changing even as growth dipped to 7.4 percent in the first quarter of 2014. Figure 2 shows that in the first four months of 2014, more urban jobs were added than in same period in 2013. 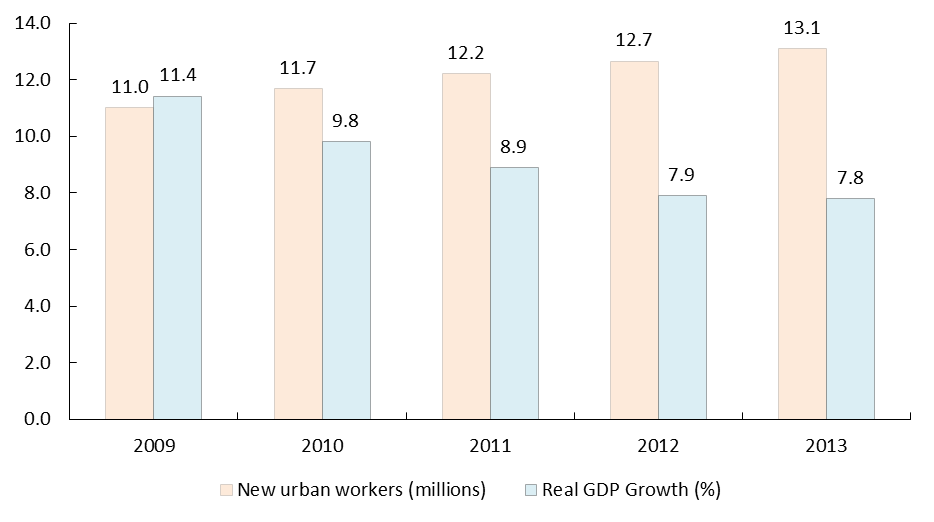 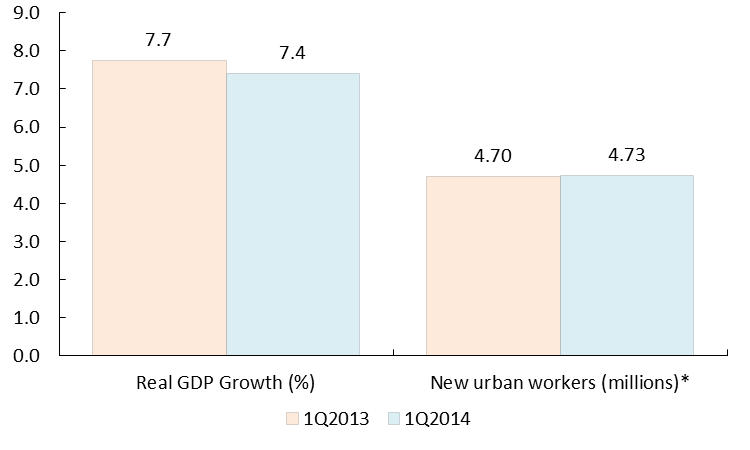 To the extent that there have been stimulus measures under the Xi and Li administration, they have mostly targeted areas with the greatest impact on employment, especially small businesses. Over the past two years, the State Council announced a number of high profile tax cuts and targeted credit easing measures directed at small and micro enterprises (小微企业) (see table 1). The vast majority of small and micro enterprises are in the service sector thus are in a strong position to absorb new jobs generated by growth in services. In addition small and micro firms account for 70 percent of employment for urban households and nearly 80 percent of employment for migrant workers . Therefore, in theory, putting more resources into their hands not only would provide some boost to output but will help ensure that China can produce enough jobs to meet the government’s expectations. 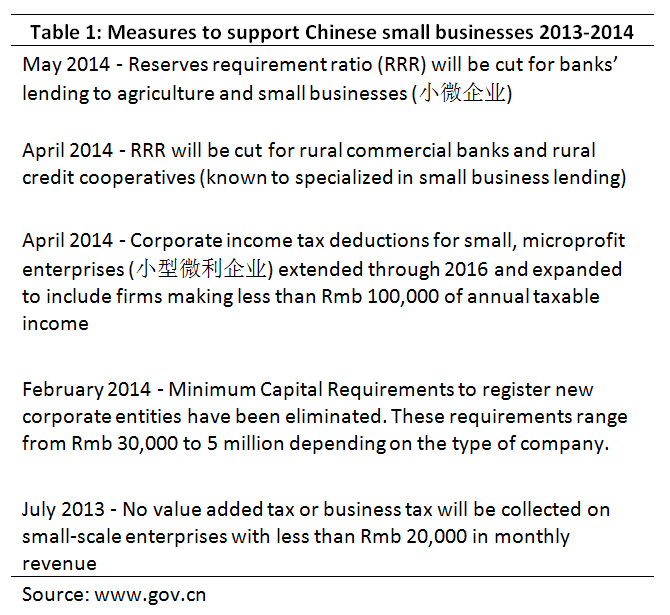 A shift away from an output target is broadly correct, and a welcome sign that Chinese leaders are improving their approach to managing the economy. It also indicates that Chinese leaders may be willing to accept slower growth as long as labor market indicators look stable. Short-term targeted measures to support labor markets are fine so long as they do not undermine or delay structural reform measures. Only structural reforms can help ensure a healthy labor market over the medium and long term. The test will come if policymakers can continue to resist the temptation to pursue broader investment stimulus and implement structural reforms even if GDP growth slows closer to 7 percent - the bottom range of Premier Li's now flexible output target.