The Misallocation of Credit in China

The fundamental challenge facing the Chinese financial sector is how to improve the allocation of credit without creating financial instability. This is a theme that has been emphasized at every major policy gathering over the past year, including the 18th Party Congress last fall, the Central Economic Work Conference last winter, and the National People’s Congress this spring. This message was reiterated this month with State Council Document 67, which calls for controlling financial risks and utilizing the financial sector to support structural reforms in the economy.

The recent turmoil in the interbank market can be viewed as the opening shot in a protracted battle to achieve this goal. Tasked by the State Council to reign in the growth of credit, the People’s Bank of China (PBoC) attempted to crackdown on the easy money flowing through the interbank market. From the viewpoint of policymakers, banks had become too comfortable extending credit right up to the regulatory limits and then relying on borrowing through the interbank market to meet their liquidity needs. The message of the PBoC to banks was that they could no longer blindly rely on the interbank market to be a lender in all situations. Unfortunately, the message was delivered in an abrupt and chaotic manner, with interest rates spiking high above comfort levels. The subsequent messaging to financial sector participants was also muddled, fueling speculation and rumors and leading to larger questions about the stability of the Chinese financial system.

The basic outline of the problem is as follows: The price of formal, on-balance sheet credit in China is too low. In the decade 2002-2011, real lending rates in China were on average 1.15 percent, compared to 4.88, 4.24, and 3.63 percent in India, Indonesia and South Korea respectively. Low interest rates lead to excessive demand for loans from borrowers. This contributes to China’s high credit-to-GDP level compared to other middle income countries. 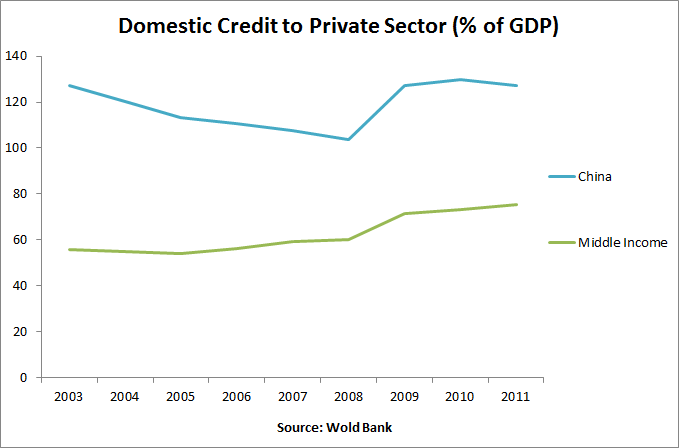 The reason credit is too cheap is that the primary source of funding for banks—deposits—is set at an artificially low rate. Over the past decade, the real interest rate on one-year deposits has been negative on average. Cheap deposits, combined with few other options for savers, create an enormous pool of low-cost funds for banks. On the lending side, there is no upward restriction on loan rates. This means that banks could theoretically charge rates much higher than the benchmark rate of 6 percent. However, competition for market share and powerful borrowers mean that most loans hover near or below the benchmark rate.  In fact, around 12 percent of loans are made at discounts below the benchmark.  Even with the increased flexibility given last year, 1.1x upward flexibility on deposit rates and .7x downward flexibility on lending rates (.8X for mortgages), net interest margins for banks have stayed healthy. 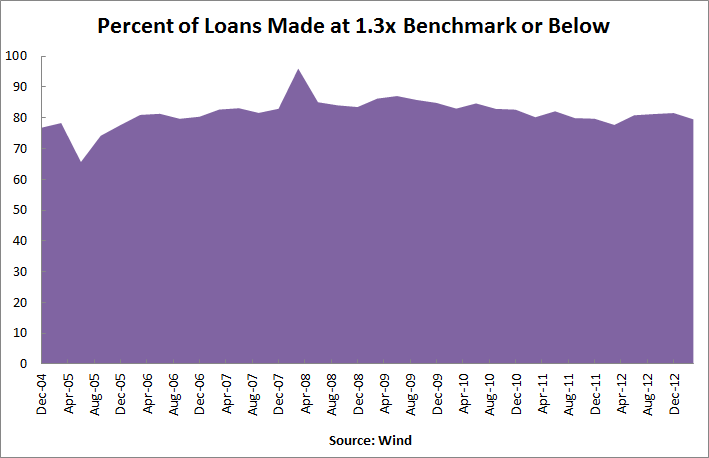 Given the almost unlimited demand for loans at these rates and a healthy profit spread for banks, it’s no surprise credit has grown quickly in China and that banks prefer to make large loans to large, well-established enterprises. Because credit allocation is not determined by adjusting interest rates, the PBoC relies on controlling the quantity of loans through measures like the loan-to-deposit ratio and issuing guidance on loan targets to banks. Once banks have reached their regulatory quota on the amount of credit they can extend, they begin to engage in regulatory capital arbitrage through off-balance sheet channels. This allows them to satisfy the demand of borrowers unable to receive funding through bank loans, often small enterprises, at much higher rates.

This is the heart of the credit misallocation issue in China. Large, often inefficient, enterprises get access to credit at artificially low rates, contributing to over-investment and privileging capital-intensive industries (for more on the rebalancing angle see Lardy’s recent piece in China Economic Quarterly). Those cut out from these low rates, are forced to self-finance through retained earnings or borrow through the shadow banking system at much higher rates.

Correcting this misallocation requires changing incentives for banks, above and beyond policy exhortations to banks to increase loans to small and medium enterprises. The way to do this is through raising the cost of funds for banks. Raising deposit rates will narrow the banks’ net interest margin, putting pressure on them to raise lending rates. Higher lending rates will increase the likelihood that banks will find it profitable to lend to previously excluded firms and will force improved efficiency in borrowers who have benefited from artificially low rates.

Taming the interbank market will only have a modest impact on overall credit allocation throughout the financial system. Raising the cost of funds for banks dependent on interbank borrowing should filter through to higher lending rates from these institutions, but the total increase is likely to be limited. Moreover, the banks that rely on interbank borrowing are small compared to the large state-owned commercial banks.

There has been some progress made on increasing deposit rates. Last June the PBoC increased flexibility around the benchmark rate by 10 percent, leading most banks to quickly increase deposit rates to this new maximum. Moving forward, however, is a delicate task. The experience with the interbank market shows that the financial system is prone to significant liquidity stresses and that the PBoC has difficulty conveying its expectations to market participants. If deposit rates are liberalized hastily, the financial turmoil seen last month could be magnified many times over. The way to avoid this is for much greater transparency on the path interest rate liberalization will take going forward. Rather than an abrupt shift which could lead to market dislocation, the PBoC should communicate with greater specificity the plan for achieving interest rate liberalization in China.