The Link Between China’s Currency Policy and Bank Liquidity

China’s foreign exchange reserves are one of the most closely monitored economic statistics in the world. China’s reserves are important not only because changes in their allocation can have a big impact on global financial markets, but also because the accumulation of reserves is closely linked to the growth of deposits in the Chinese banking system.

Banks in need of foreign currency can buy the excess holdings of other banks through this interbank system. All trades occur through the China Foreign Exchange Trading System (CFETS), an electronic interbank trading platform which is regulated by the People’s Bank of China (PBoC).

Most of the time, the supply from surplus banks exceeds the demand from banks in need of foreign currency. This is due to the mercantilist undervaluation of the renminbi which leads to persistent external surpluses and corresponding capital inflows.  To resolve the imbalance between supply and demand in the foreign exchange market, the PBoC must step in as the buyer of last resort and buy the excess currency. The dollars purchased by the PBoC end up in China’s foreign reserves. The chart below shows the relationship between the net foreign exchange position for the financial system and the growth in foreign reserves. The growing divergence between the two is the result of currency appreciation. An appreciating renminbi results in higher levels  of foreign exchange purchases when converted into dollars. 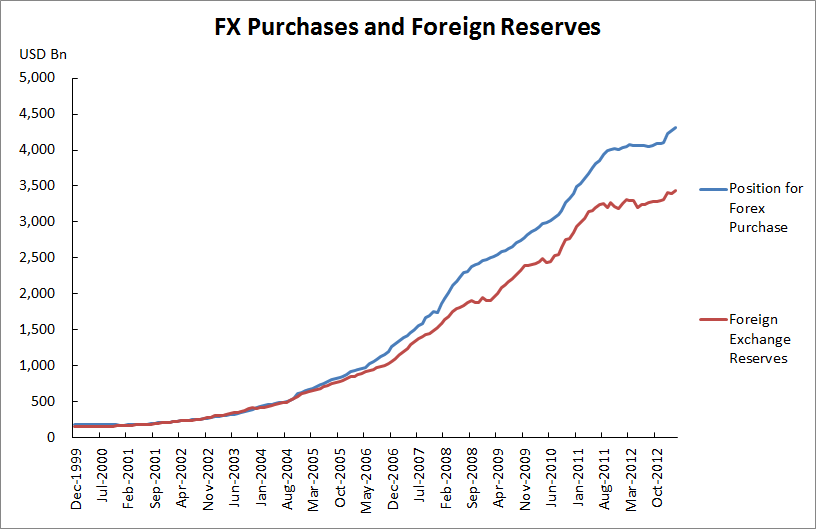 When the central bank purchases foreign exchange from banks it increases the amount of renminbi in the domestic financial system. To prevent inflation, the PBoC takes steps to limit the effect on the money supply, through central bank bills and the required reserve ratio. To the extent that inflows are sterilized, they are taken out of circulation and not available for banks to lend out. There is, however, still an impact on banks’ lending capacity through the increase in renminbi deposits. This increase in deposits increases the denominator in the loan-to-deposit ratio, lowering the overall ratio and helping banks that are close to the regulatory limit of 75 percent. 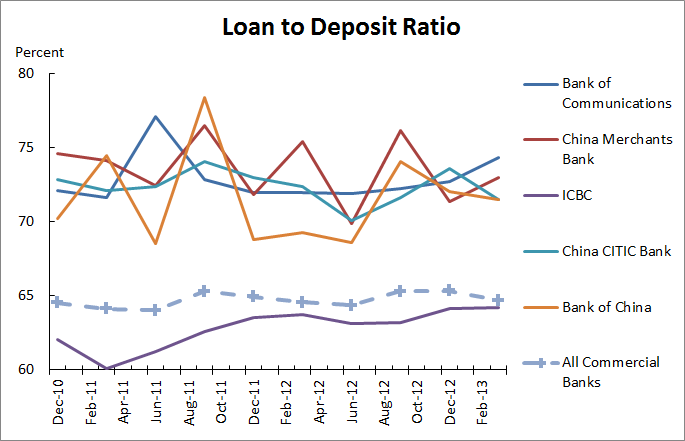 On first glance, the relatively conservative loan-to-deposit ratio of 75 percent makes it appear that banks have ample liquidity. However, the combination of a high required reserve ratio, 20 percent for large banks, and guidance from the PBoC to purchase central bank bills means that a large proportion of bank funds are tied up in supporting the government’s currency policy.

As a result, liquidity is often tight in the banking system.  Relatively small changes in financial flows can have a large effect on the financial system.  For example, SAFE’s stricter regulations on export invoicing contributed to a slowdown in foreign exchange inflows last month and a corresponding drop in foreign exchange purchases from 294 billion renminbi in April to 67 billion in May. This shift, combined with reluctance by the PBoC to increase liquidity into the system, led to a dramatic spike in interbank lending rates as banks short on cash bid up the price of borrowing. 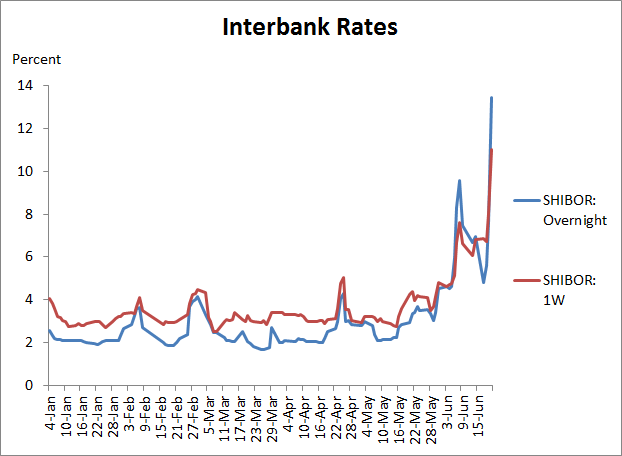 The interbank market remains volatile now because the PBoC faces a policy conundrum. It has been aggressively signalling to banks that the pace of credit growth has been too rapid this year and has taken steps to tighten monetary policy. In normal circumstances, the PBoC would intervene quickly to clear up a liquidity crunch like what is occurring now. However, given its larger goal of presenting excessive credit growth,  the PBoC has been reluctant to publicly step in. A growing number of reports claim that PBoC has quietly been extending funds to weaker banks and instructing stronger banks to begin interbank lending again.

All of this reinforces the peculiarity of the Chinese financial system where quantitative restrictions on credit are the dominant regulatory approach and sterilization is carried out on an immense scale. To prevent excess lending, brought about by an artificially low interest rate, banking regulators have implemented a quantitative cap on lending in the form of the loan-to-deposit ratio. However, due to the ongoing need to sterilize currency inflows, banks are required to hand over an enormous share of their deposits to the central bank.  This leaves banks in a position of having relatively few liquid assets, irrespective of the loan-to-deposit ratio. The growth of deposits stemming from foreign currency inflows helps banks that are edging up towards their loan-to-deposit limit. However, when these flows slow down, the entire market can suffer a funding crunch as shown by the recent interbank lending rate spikes.  These periodic shocks reveal that despite one of the world’s highest savings rate and 90 trillion renminbi in deposits, the Chinese banking system is still vulnerable to periodic liquidity crunches.