Ignore the Noise: Why Chinese Household Consumption is Still Too Low

A growing number of economists inside and outside of China have suggested that official statistics underestimate the contribution of household consumption to the economy. Most notably last week the Wall Street Journal reported that some government officials are criticizing official numbers for understating household consumption. The official argued if proper adjustments are made to account for these deficiencies, the Chinese households would hold a much larger share of GDP and the economy would not look as unbalanced. These attempts to adjust consumption data, while academically valuable, could be used as an excuse to delay needed reforms and ultimately do not change the overall picture of household consumption.

First, China’s household survey needs to improve. Chinese consumption data is based on a survey of 65,981 urban households and 73,750 rural households. The survey was not established until the 1980s and the National Bureau of Statistics is still attempting to broaden the coverage and scope of the survey to meet international standards.

Second, in contrast to more developed economies, Chinese households have traditionally relied less on credit and more on cash payment. The reliance on cash payments makes it difficult to account for the quantity and direction of household spending.

Third, grey-income is more common in China than in developed economies. Grey-income often “in-kind” compensation from corporations to businesses is difficult to measure. Such income is often wrongly calculated as a corporate expense (a debit in GDP income accounting) rather than a credit to households.

Fourth, owner-occupied housing is under-estimated. Most countries calculate consumption of owner-occupied housing with imputed rents based on the current market value of homes (an estimate of net income the owner would have received if they had rented the house). In China this is not possible because of a weak rental market and deficiencies in data collection of the value of housing stock. Instead the National Bureau of Statistics uses the depreciation of housing stock calculated with construction costs as a less than perfect proxy.

Even after upward adjustments consumption is still low

However, even after adjustments are made to account for some of the problems in official data, consumption levels in China still look low compared to other countries.

There are currently two methods for addressing concerns with official data on consumption:

Second, several economists and brokerages have attempted to do “bottom-up” adjustments to official data. These adjustments attempt to correct some of the specific deficiencies in official data. For example, some have attempted to provide a better guess for consumption of housing services by using estimates of the actual market value of homes to calculate “imputed rents” rather than the official approach. Most comprehensive attempts to address all the issues with the NBS numbers tend to add between 5-15 percent to household consumption share of GDP.  In February, Jonathan Garner and Helen Qiao of Morgan Stanley adjusted official numbers for housing, auto purchases, medical service expenses, among other things. After taking these factors into account they found that in 2010 the share of household consumption should be 44.3. In July, Thomas Gatley of Dragonomics also conducted a similar bottom up estimate. His analysis produced a more modest upward adjustment closer to 39 percent of GDP in 2010.

Both the PPP and “bottom-up” approaches still show Chinese consumption much lower than other countries. In 2010, the average consumption share of GDP for the 189 countries covered in the Penn World Tables was 70 percent, still much higher than the 44.2 percent PPP adjusted Chinese household consumption share. Even comparing across economies at similar levels of development, China is still much lower than India, Malaysia, or Thailand. The only comparable country in Asia with similarly low levels of consumption after the PPP adjustment is the small city-state of Singapore. 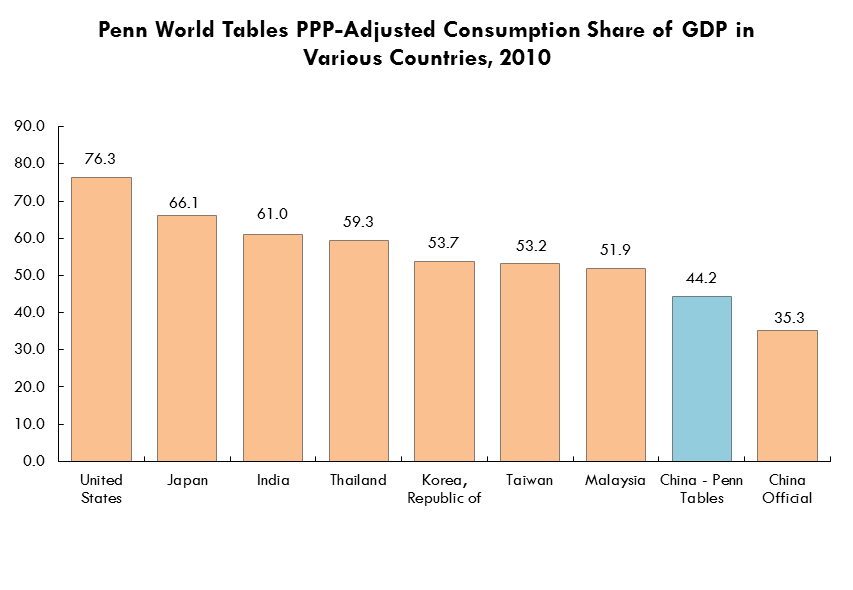 Any adjustment to household consumption in China still yields a similar downward trend over the past decade with minor variations. Official data Chinese data shows household consumption as a share of GDP falling consistently between 2000 and 2008. The situation improved slightly in 2009, dipped in 2010, and experienced a more rapid increase in 2011.

The Penn World Tables, Morgan Stanley, and Dragonomics provide their adjustments to Chinese consumption data in a time series for comparison. The three methodologies differ from official data only a few minor points. First, they imply a more rapid increase in consumption in 2009 continuing until today. Second, the three estimates imply that consumption growth was more rapid in 2009 than 2011. Third, the adjusted consumption numbers show the share of consumption in GDP increasing in 2010 whereas the official numbers show a decline. 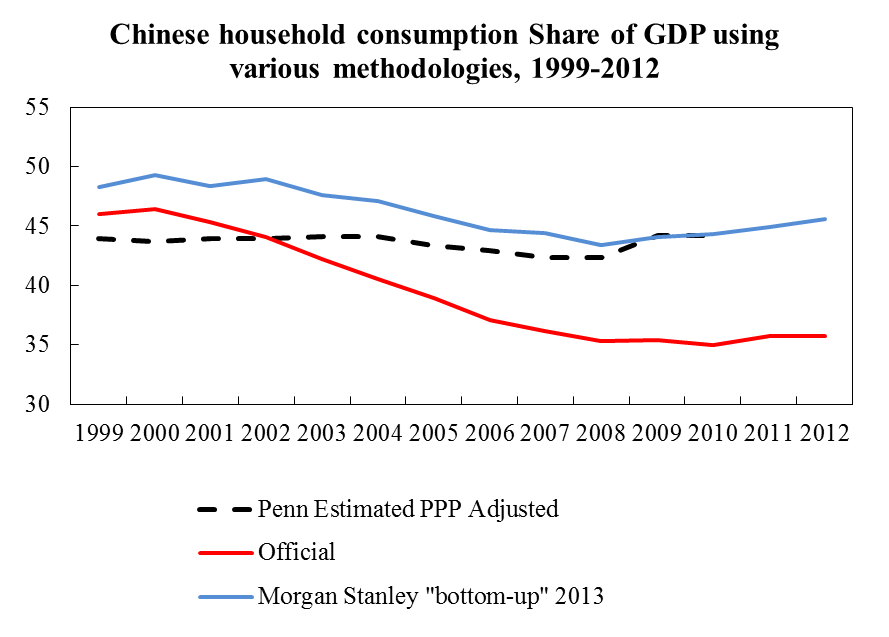 These differences are minimal but ultimately the official trends appear more believable. Disposable income growth is a good way to test whether or not the official trend is believable. If household income grows faster we would expect expenditures to similarly increase. The National Bureau of Statistics’ disposable income numbers are also subject to less variability and estimation as the various expenditure categories because they are namely based on enterprise wage data. 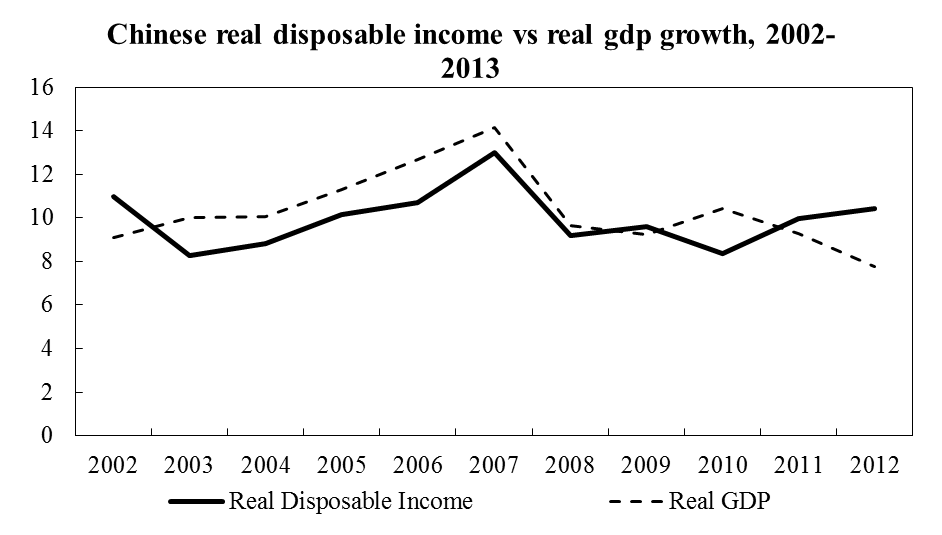 By any metric the Chinese economy is unbalanced and needs continued structural reforms to promote household consumption. Official data on household consumption in China is still the best gauge of what is going on in the Chinese economy. The fact that some government officials use non-official adjustments to Chinese household consumption figures is worrying but only a reflection that Chinese officials like officials in most countries sometimes use third-party data to justify their positions with upper management. The concern is if criticisms of official numbers become an excuse for complacency in structural reform or worse lead to a reevaluation of China’s rebalancing agenda.