How Vulnerable are Chinese Banks to a Real Estate Downturn?

China is currently undergoing a new round of bank stress testing, with a drop in real estate prices certain to be amongst the variables tested. Previous stress tests, both official and unofficial, have downplayed the risks to the banks from a housing price downturn.  For example, a recent report from the Bank of Communications Financial Research Center estimated that a decline in housing prices by less than 30 percent would have little to no impact on the non-performing loan (NPL) ratio in the banking system. Even a larger price drop of 40 to 50 percent would only increase the NPL ratio by 3.8 to 5.6 percentage points.

The current NPL ratio for commercial banks is 1 percent. If we take the high-end estimate for the 50 percent drop in housing prices that would bring the NPL ratio to 6.6 percent. Let’s put that number into context. As recently as 2007 the NPL ratio was 6.6 percent. Three years before in 2004 it was more than twice that amount. The implication is that even with a 50 percent drop in housing prices, Chinese banks could continue to operate relatively normally as it did during the mid-2000s.

At first blush this seems reasonable. Real estate loans account for 20 percent of the total loan book of commercial banks. A sharp correction in real estate prices would put many of these loans into default. The bulk of the defaults would likely come from highly leveraged property developers, rather than households who in general have sizable equity stakes in their homes. This would be a painful shock to the banking system, but manageable given high capital buffers.

If history is a guide, however, things will be a bit more complicated. First, a whole slew of industries that provide inputs to real estate development, such as steel, white goods, and cement, will suddenly experience a sharp drop in demand as home construction slows. This undoubtedly would push many of the marginal performers into financial distress. This is a significant concern considering the increase in corporate leverage ratios seen over the past several years. 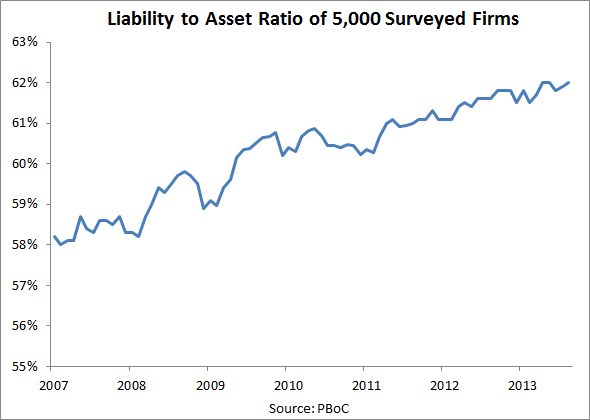 According to the Chinese five-tier loan risk classification scheme, a drop in collateral value requires banks to increase provisioning, thereby reducing their lending capacity. Adding to the problem, many enterprises rely heavily upon providing real estate as collateral for borrowing. A drop in the value of this collateral will have a negative impact on their ability to receive new loans, the often-cited collateral channel. This will in turn lower corporate investment and affect the entire economy.

What are the historical precedents for this? Much like China today, Japan underwent a large real estate boom in the 1980s. Also similar to China, the boom was mostly domestically financed and household leverage was relatively low due to high down payments (self-financing averaged around 40 percent). Japan, like China, had a bank-dominated financial system in which land was an important piece of collateral. When land prices collapsed by 50 percent, the debt capacity of firms using real estate as collateral declined significantly. This led to a reduction in investment by these firms, damaging the entire Japanese economy.

With corporate debt levels in excess of 150 percent of GDP, this same negative spiral in investment due to a real estate price correction is a danger for China. This is especially true for local government financing platforms, which are especially dependent on land as collateral. A shock to land price values would diminish their ability to finance new infrastructure projects, which have been an important driver of economic growth. 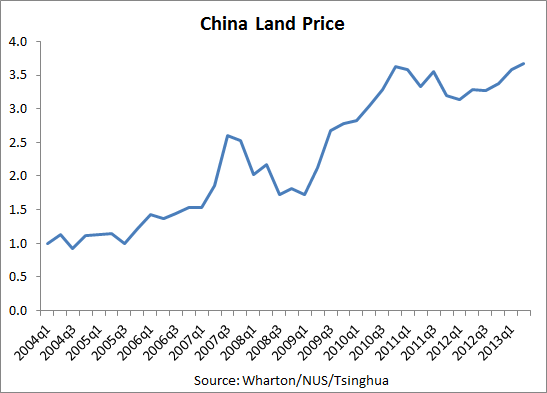 A drop in real estate prices will also negatively affect consumption. Low leverage levels mean households are unlikely to walk away from the real estate they have purchased as they may still retain some positive equity.  There will, however, be a large wealth effect as savers realize their investment is now worth significantly less than they anticipated. This problem may be especially severe in China for two interrelated reasons. First, a large percentage of homes are purchased for the purpose of investment. Estimates for the first half of 2012 put the share of house purchases for the purpose of investment at greater than 50 percent. Second, Chinese households have a large share of their total wealth in the form of housing, in excess of 40 percent (the U.S. number is closer to 30 percent). If house price values drop as much as predicted in the Bank of Communications stress test, households will undoubtedly cut back on consumption as a result of the negative shock to their net worth.

None of this is meant to predict an imminent collapse in the Chinese housing market. There are many reasons to believe that the underlying demand for new homes will continue to be strong as the country urbanizes and grows wealthier, albeit maybe not as strong as what we've seen in recent years. What is clear, however, is that real estate price corrections have large consequences beyond simply an increase in real estate developer defaults and mortgage foreclosures. Real estate demand supports a wide variety of industries and real estate as an asset plays a critically important role as collateral for lending and as an investment for households. Large drops in real estate prices lead to contractions in investment and consumption which will damage the economy and ultimately feedback upon the financial system in the form of more defaults. China isn’t in danger of a US-style wave of foreclosures, but the financial sector is certainly not insulated from a real estate-induced economic slowdown.