Equity Series Part 5: Should US Investors be Worried About the China Equity Correction?

Read previous posts in this series on China's equity markets by clicking here.

The dramatic price declines in China's domestic equity market have given rise to a number of questions about the possible impact on investors in the US. We would separate the risks to US investors into three categories: 1) direct holdings of Chinese equities, 2) contagion effects on other financial assets such as Japanese or Korean equities etc., and 3) real economic output declines if the fall in Chinese equities portends broader economic weakness. In this post, we will address the first risk directly and insodoing address the second. In previous posts (here and here), we have addressed the third.

US residents’ holdings of Chinese equities are remarkably small. This should come as no surprise given the tight controls placed on foreign participation in local asset markets. In the last several years as part of its effort to slowly open its capital account, China has been allowing non-residents to invest in domestic equities via special programs, such as the QFII program. However, those investment amounts are still very small.

According to data from the U.S. Treasury, as of March 2015 US residents held $133 billion of Chinese equity assets and just $2 billion in debt assets. These data are recorded at market value. Therefore, if we assume that US investors held a portfolio of assets that reflected the CSI 300 index (an index of the largest 300 firms listed in China), then the value of US residents’ holdings will likely stand now at approximately $140 billion. This represents, however, a very small share of both US foreign assets, let alone US residents’ total assets[1].

This is also the case in other economies as well. Using data from the ECB, as of March 2015 euro area residents held $92 billion[2] of Chinese equity assets. Adjusting for the rise and fall in the equity market (as above with US investors), euro area holdings likely stand now at around $98 billion. Using data from the IMF, we make similar estimates for the UK and Japan (see exhibit 1).

To address the second question of contagion to other asset markets, we take a look at the ten largest countries for which US residents hold equities (which account for 66.7% of total foreign equity holdings) and look at how correlated their equity markets are with China’s domestic equity market. The stylized fact about China’s domestic equity market is that it is more or less dissonant from global asset markets. Exhibit 2 demonstrates the disconnectedness: even returns in markets such as Hong Kong only have a correlation of just 0.37[3]. On the other hand, looking at the pair-wise correlations for H-shares (Chinese corporates listed in Hong Kong), correlations on average double[4].

Incidentally, exhibit 2 also shows why Greece likely matters more for US investors; although US residents hold very little Greek debt or equity, they hold a lot of German and French assets and to the extent those assets trade with the drama of the Greek debt crisis it has a large impact on US portfolios.

The upshot is that US investors should not be concerned about the correction in China’s domestic equity markets from a holdings or contagion channel. On the other hand, if China’s equity market were indicating a broader, steeper slow-down in the economy than previously expected, that would indeed likely have a deleterious effect on US investors’ portfolio. However, as we have shown in previous posts, we do not believe this to be the case. 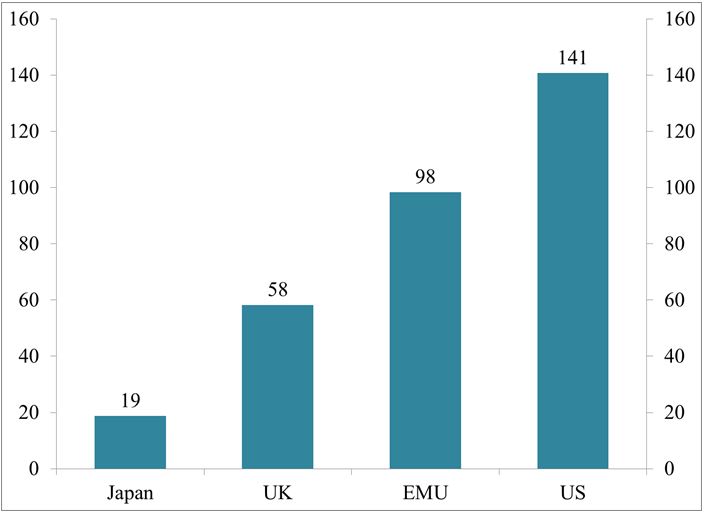 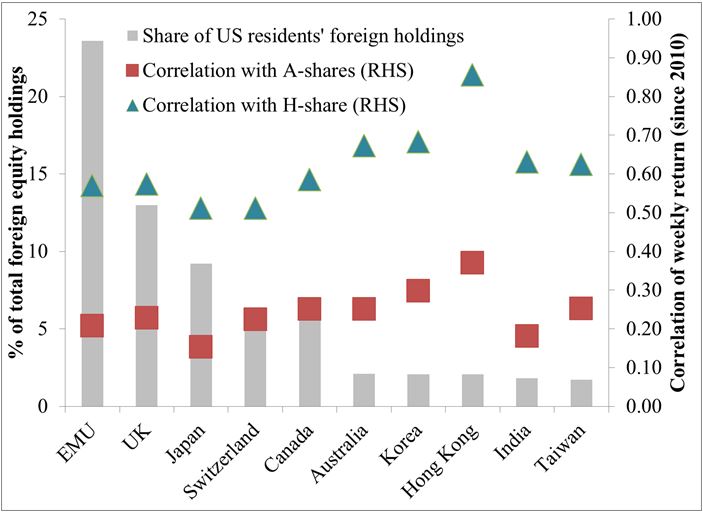 [3] We use weekly returns to control for time zone, holiday, and other issues that may affect correlation. We use correlation since January 2010. If we used correlations for all history or even since 2002, they would be even lower! We use returns adjusted for currency, to reflect the equity correlation for a USD-based investor.

[4] We recognize that this may not be an accurate “downside” measure as in a crisis equity correlations tend to rise.