In our previous post, we looked at what the impact of the equity market drawdown could have on GDP growth. In this post, we will show that, apart from consumption, the equity market rally has had a non-trivial impact on growth via the financial sector.

The financial sector has had an increasingly large contribution to GDP growth.  As of the first quarter of 2015, value-added from the financial sector was 7.64% of total output, up from 4.83% in Q1 2007. There are a number of factors that have contributed to the financial sector’s increased share; financial repression and a very large stimulus program via the largest state-controlled banks helped the large banks achieve superior profits in the post-2009 world. As shown in exhibit 1, China’s financial sector share of GDP is in line with a number of other economies, though perhaps high for its per capita GDP level.[1]

However, another part of the financial sector’s business, brokerage services, has experienced a windfall of late. While up-to-date balance sheet data are not available for the largest banks and dedicated brokerage services firms on what their non-interest income from commissions is, it can be inferred that in the first quarter of 2015 when trading volumes increased markedly, their income therefore would likewise increase.

As shown in exhibit 4, non-interest income[2] broadly tracks well with trading volume. But banks also profit from increased income from margin lending (of which there was no shortage, see previous post), custody servicing, and, for the lucky few, wealth management. Equity bull markets are great business for financial firms.

How has that translated in GDP? Looking at the data released from the National Bureau of the Statistics for Q1 2015, the financial sector contributed a remarkable 30% to year-on-year growth. This is worth spelling out explicitly: this means that of the difference between Q1 2014 and Q1 2015 headline GDP, 30% is from the change in valued-added by the financial sector. This contribution is up from the 11% contribution to year-over-year growth in Q4 2014. Exhibit 3 shows the contribution of GDP growth by the financial sector and the quarterly cumulative equity market trading turnover. This comes largely at the expense of the industrial sector, which declined from 17% to 8% as a share of GDP growth in Q4 2014 and Q1 2015, respectively (exhibit 5).

The clear question that arises is: if trading volumes come down, doesn’t this mean that headline GDP growth will suffer a large decline? Firstly, it is clear that the increase in financing activity has had a non-negligible impact on GDP. However, as we noted in a previous post, output in the first half of the year, particularly in the first quarter, is significantly lower than the 2nd half due to the seasonal effects of holidays and other specific functions of the Chinese economy. Therefore, the impact any non-standard event in the first quarter may be exaggerated. Secondly, if China’s financial sector growth had been equal its average since 2012, year-on-year growth would have only been about 20 basis points lower (7.613% from actual 7.77%). Finally, from a longer-term perspective, it is likely that finance’s contribution will continue to grow as China opens its domestic equity markets to foreign investors and Chinese savers place higher proportions of their wealth in high-value-added financial services.

The upshot, however, is that for the first quarter and second quarter of this year, it seems likely that the financial sector will continue to contribute an outsized share to GDP. Assuming the volatility settles later this year, finance’s share should settle back to its trend level of 8% or so. The hope is that other sectors of the economy such as the hard-pressed industrial sector and the heretofore undaunted consumers continue to provide the steam necessarily to sustain a healthy rate of growth.

Exhibit 1: Financial sector value-added as a % of GDP vs PPP GDP per capita across various economies (5-year average of each, 2009-2014) 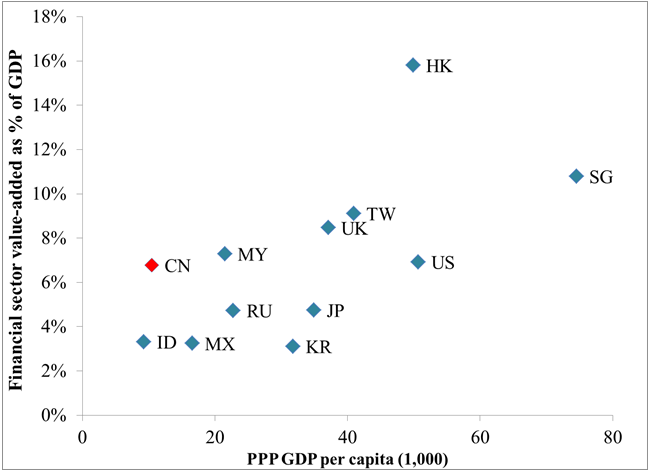 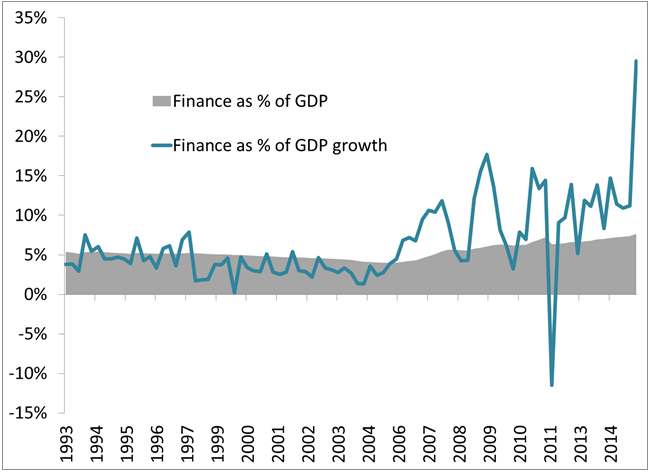 Exhibits 3a and 3b: Quarterly value of turnover on A-shares vs. financial sector value-added as % of year-on-year GDP growth (as of Q1 2015) 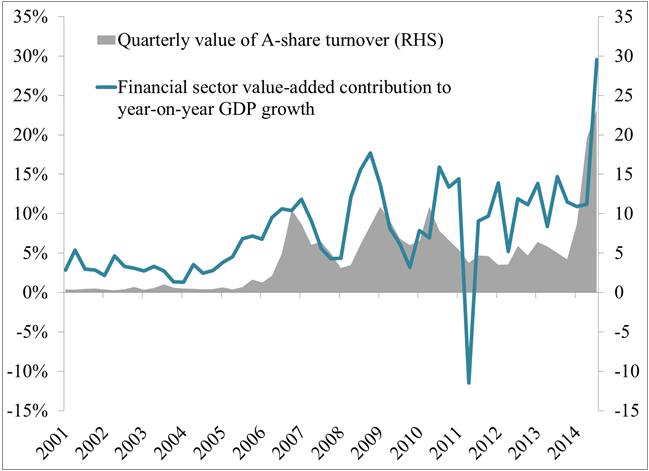 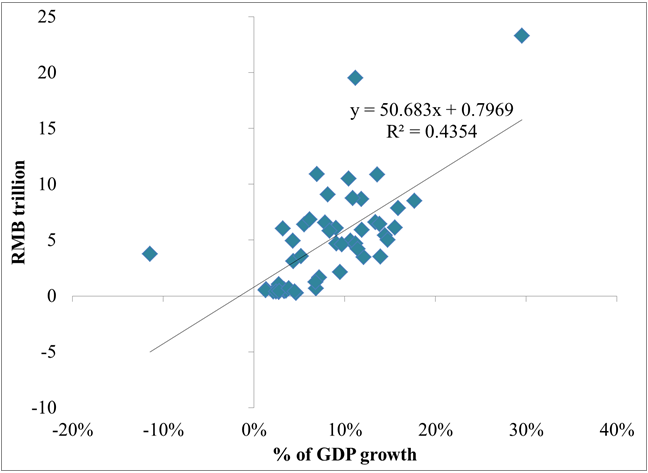 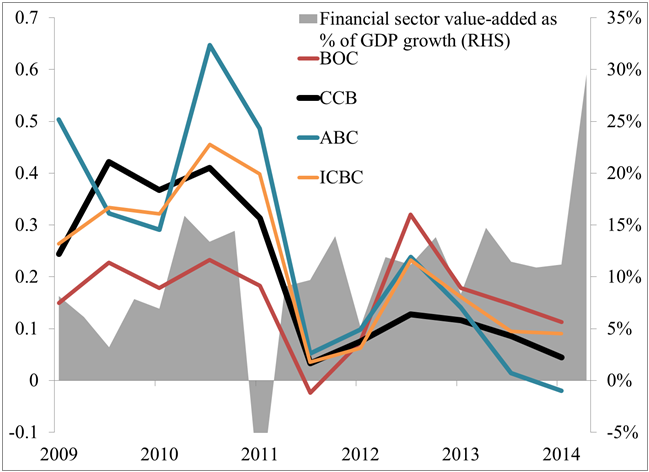 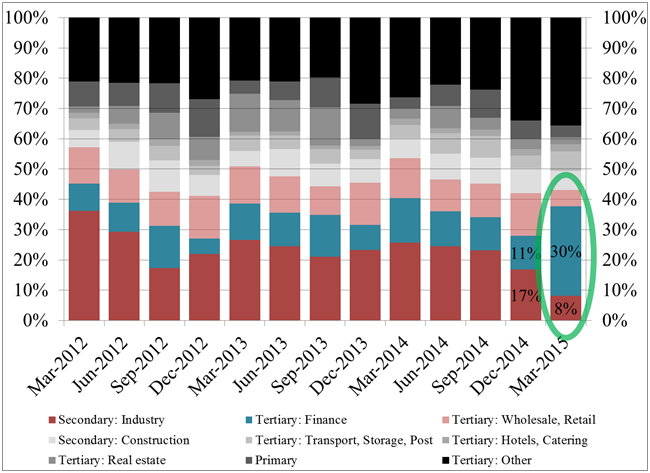 [1] We do not posit that PPP GDP per capita the only or even a good indicator of the natural level of the financial sector’s contribution to GDP, but it is helpful to show the variance along similar levels of income.

[2] This is not a clean measure as it includes many other forms of income including bank card service income and guarantor services, etc. However, this is the closest measure we can obtain for several banks over a reasonable amount of time. For dedicated brokerages such as CITIC and Xiamen, the latest available data we have found is as of 2011 or 2012.