A fortnight ago, the answer to this question would have been an unequivocal yes. However, given the dramatic drawdown, the answer is now less clear. On the one hand, domestic equity valuations still stand above their historical median levels and at a time of economic uncertainty both at home and abroad. On the other hand, a strong commitment to reforms that will raise long-term growth potential of Chinese corporates would suggest that Chinese equities have rerated and will continue to trade at multiples above their historical averages.

Following the crash in 2008, price-to-earnings multiples on Chinese equities ground down to under 10x in mid-2014, despite superior broad economic performance in China. There is much speculation as to why Chinese domestic equities traded at such low multiples, but generally accepted that the uncertainty around reform efforts, corruption, corporate governance – all well-established fault lines of emerging equity returns – depressed expectations. Furthermore, a strong incentive for households to allocate savings elsewhere (see our previous post on property as an investment class), relatively tight and tightening credit conditions, and strictly limited foreign investor participation contributed to the low valuation (mostly) domestic investors placed on equities. Fast-forward to the third quarter of 2014 when the equity rally began in earnest and many of these conditions were changing.

The central bank and other regulatory authorities have been easing financing conditions as the Chinese economy continues to deleverage from its post-crisis credit boom. This has included several cuts to the deposit rate (accompanied by a widening of the band around the target) and required reserve ratio, along with several rounds of regulatory measures aimed specifically at the capital markets. Ceteris paribus one would expect these moves to be a tailwind for equities. As it happens, these came in the midst of an extended downturn in the housing market, which has been the primary destination for domestic capital for over 10 years, spurring the remarkable growth therein. Thus, the marginal investor would be incentivized to place their capital elsewhere. The undervalued equity market would be obvious choice.

On the policy front, China’s leadership, now nearly three years into their ten-year term, has reaffirmed their commitment to structural reform, even at the expense of headline economic growth. These commitments have been followed up by incremental reforms on a number of fronts which, while as yet far short of what is needed, has led many investors to have more confidence in the present value of Chinese equities.

Even so, the doubling in the value of the equity market in less than 12 months had many analysts and commentators warning that the rally had decoupled from fundamentals. However, following the recent 30-40% drawdown, valuations are back within the middle range of their historical distribution. We take a look at a common set of valuation measures – price to 12-month trailing earnings, price to book value of equity, price to 12-month average cash flows, and dividend yield – to judge where valuations stand with respect to their history. We then normalize these measures by evaluating what percent of the time (how many monthly observations out of a large sample) that particular valuation measure has been more expensive than it is currently[1]. Finally, we take a simple average of these four valuation measures in order to reach an aggregate gauge on under/over valuation.

As shown in exhibit 1, the Shanghai equity market index is below its median historical valuations. But if one excludes the pre-crisis history, the index is in the seventh decile of the distribution—not clearly over-valued. The Shenzhen index is more difficult to judge. Just prior to the correction, it comprised nearly 43% of total domestic equity capitalization. However the recent drawdown has disproportionately impacted smaller, higher beta stocks – of which the Shenzhen index has a greater share. Thus, valuations for the Shenzhen index remain high in the ninth decile[2]. H-shares (as Chinese corporates listed in Hong Kong are known) are well below their historical valuations across any sample period.

One can use the H-share premium or discount to A-shares to get a rough estimate of domestic equity over-valuation, though this is not a perfect measure given the difference size and composition of the two indices, as well as differing investment conditions in the two markets. To reach a more accurate measure, we construct an A-share index consisting of only those firms that have listings in both the A-share and H-share markets[3]. Exhibit 5 shows the resulting adjusted premium of A-shares over H-shares, which we calculate using the average of the price to book and price to earnings premiums. H-shares were clearly trading at a steep discount by the end of June to their onshore counterparts. In fact, this discount stands at the top of its 9th decile of historical observations (our index goes back to June 2005).

On the fundamental side, the story is mixed. While earnings per share (EPS) are in negative year-over-year growth territory at the index level (see exhibit 6), 1365 of the 1580 corporates from the two main indices for which data are available are projected to have positive EPS growth next year, and over half experienced positive earnings growth this year. The losses are concentrated in the industrial and resource sector where overcapacity has plagued performance for some time (see exhibit 7). On the downside however, only 40% of firms in the two indices had year-over-year increases in profitability (measured by increases in profit margins), and only 44% had improving capital efficiency (measured by increases in return on equity).

It appears then, from a valuation and fundamental standpoint, that following the recent drawdown, equities are back within their fair-value range. It is true that valuations overall still stand above their historical median values, given the structural reforms that have taken place and authorities’ commitment to pushing ahead with further major reforms such as further foreign access to domestic equity markets (and vice versa) and a deposit insurance scheme, the price investors are willing to pay for present value of future earnings may indeed be higher. Thus, while equities will continue to be susceptible to volatility and exuberant investor behavior due to the still-tight capital controls and limited investment options, the rerating in Chinese equities may be here to stay. 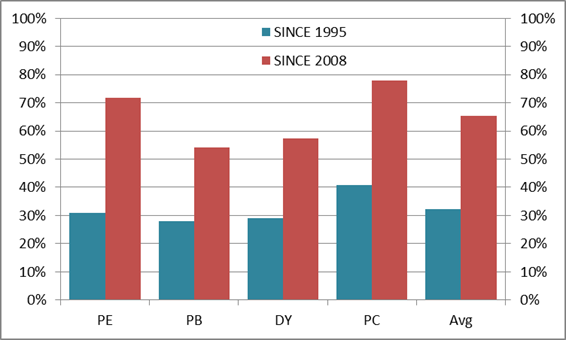 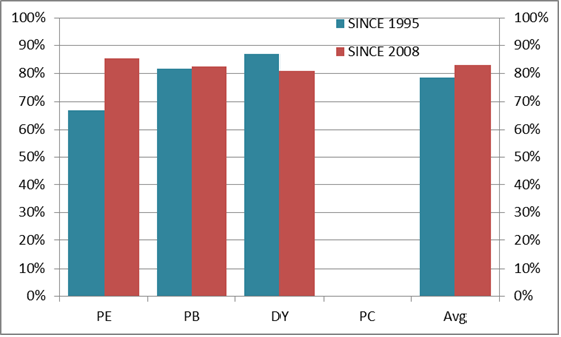 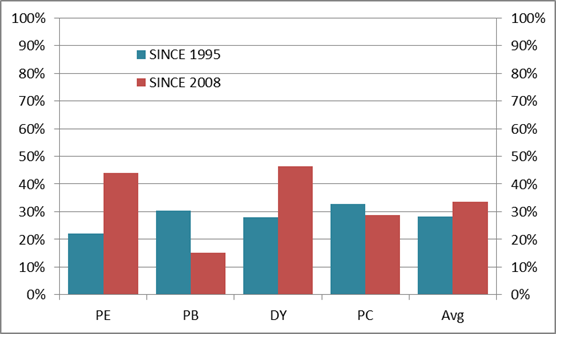 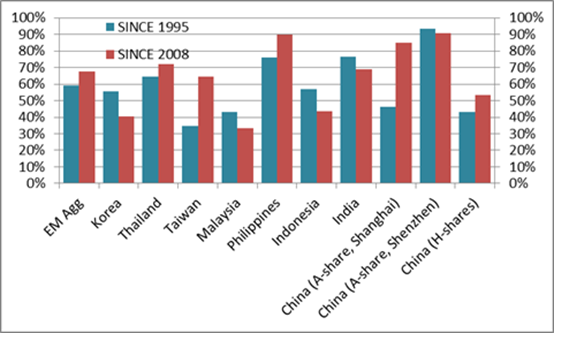 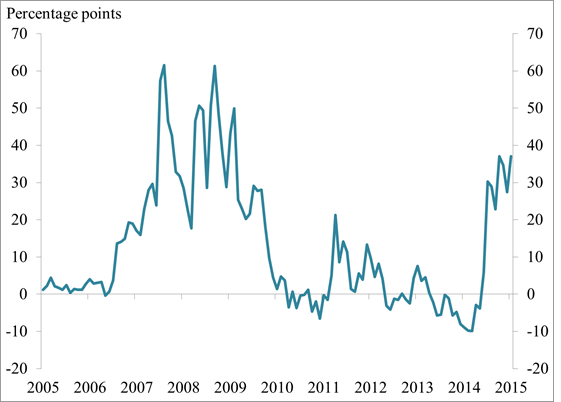 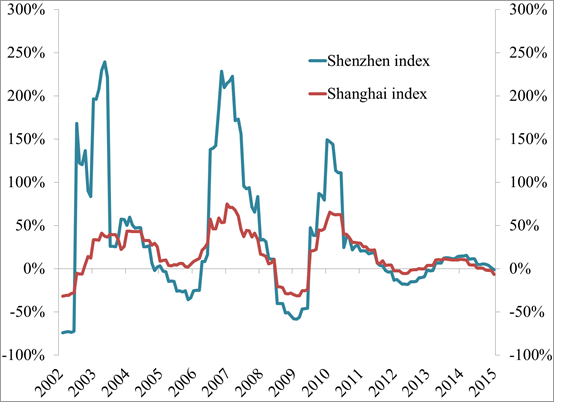 Exhibit 7: Chinese equity earnings-per-share growth by sector (as of June 2015) 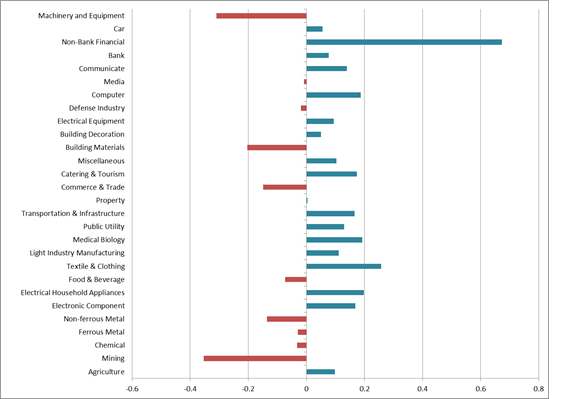 [2] For Shenzhen, we do not consider price-to-cash flow as we do not have enough consistent data. Therefore the aggregate valuation is only for the remaining three measures.

[3] We exclude firms that list only a subsidiary (which may have a different core business) in Hong Kong, e.g. SinoPharm. We use the market cap weights of cross-listed H-share firms to reaggregate the A-share listings. Obviously the issue of differing risk premia structure due to liquidity and international exposure etc still exists, but this approach at least eliminates the compositional differences.