The Economics of H2O: Water Price Reforms in China

In China – as with most countries – the price of water is controlled by the state not the market. The problem with state-control of water prices is that prices are often slow to adjust to supply and demand. Low water prices encourage waste and subsidize water-intensive households and corporations. In a country with abundant water supplies such subsidies while inefficient could be sustainable. In a country – like China - with relatively scarce water resources such waste is costly. However, China is now introducing market reforms to water pricing. They promise to raise water prices and improve the efficiency of water use. 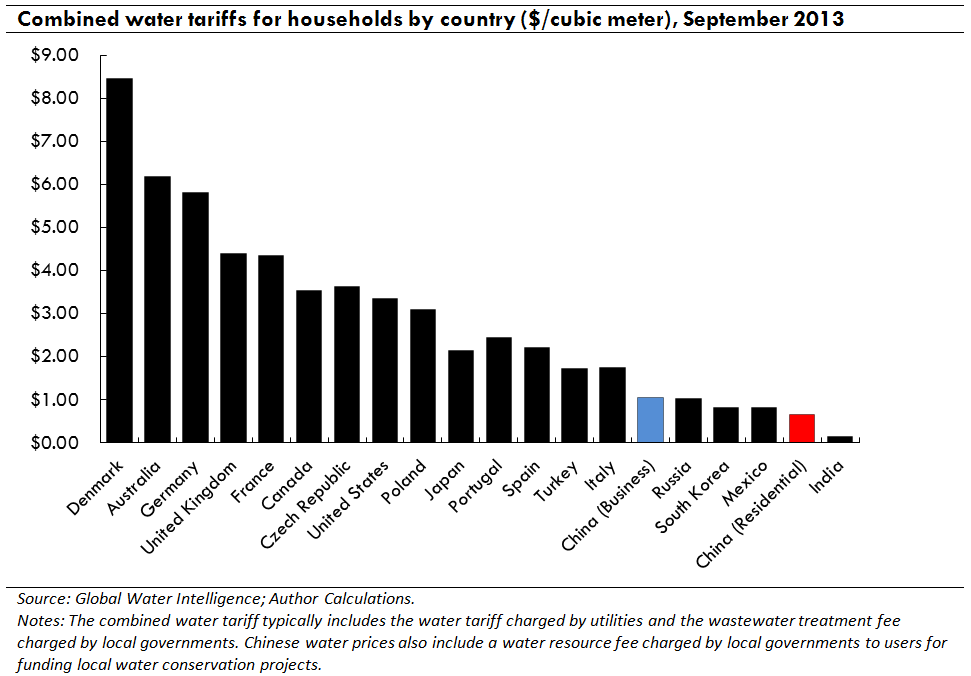 Low water prices are a problem for China because water resources are relatively scarce. Although China has the sixed largest supply of water resources in the world, per capita availability is low. China’s per capita availability of freshwater – at 2,093 cubic meters in 2011- ranked 101 out of 175 countries tracked by the World Bank. Compared with the United States, China has four times less freshwater available per person, but charges half the price for businesses and one-fourth the price for most urban households. 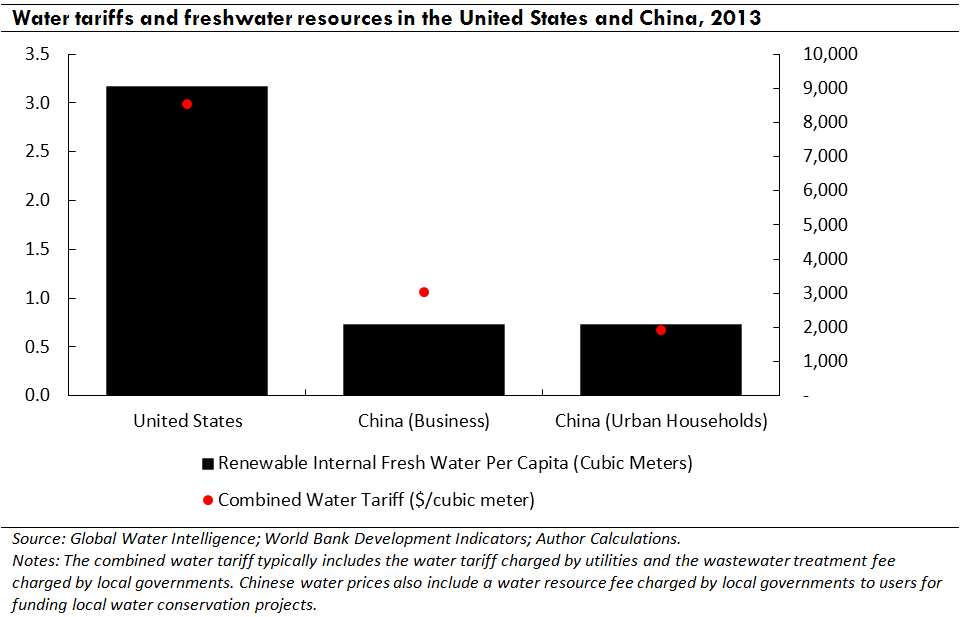 China’s low water prices are pulling down the returns of water utilities and subsidizing water consumption. The average return-on-assets of Chinese water utilities over the past fifteen years have been too low to cover the cost of borrowing from banks, and even lower than the returns of electric power utilities. If water utilities aimed to make a profit high enough to cover the cost of their assets, they would have to raise water prices seven times higher than their current level. This would put Chinese water tariffs at levels closer to France or the United Kingdom. At current price levels the lost potential profit for water utilities should be viewed as a subsidy to water intensive users. For the past decade these subsidies averaged Rmb 25 billion a year. 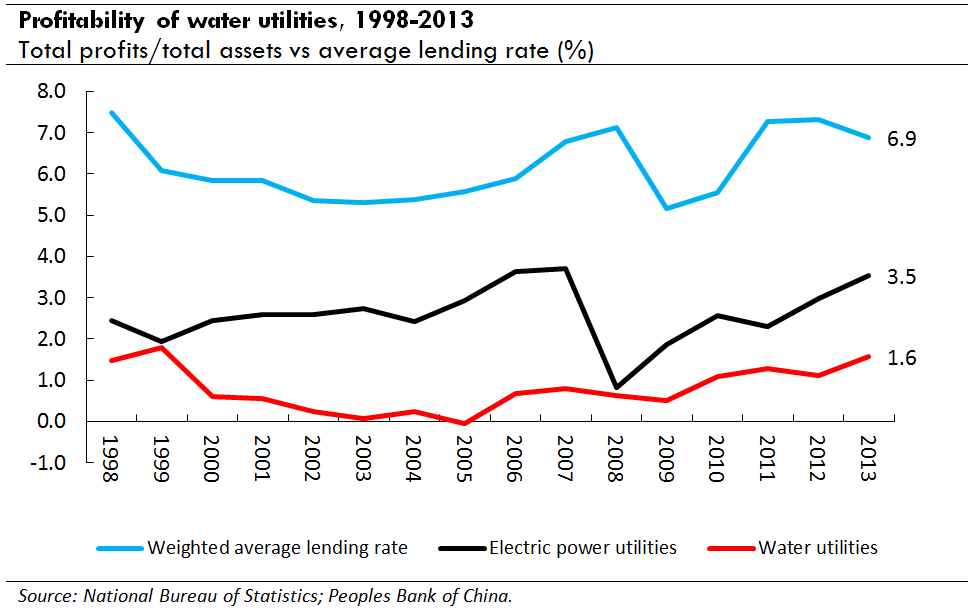 In the long run water subsidies could deplete scarce water resources leading to high economic costs. For example, the north-south water diversion project designed to transport water from southern China to the water scarce north is estimated to cost the economy $62 billion.

Raising water prices is necessary but politically contentious. Chinese households view water as a public good and resist any price increases. Policymakers are also concerned that raising water prices will exacerbate income inequality because water consumption represents a higher share of income for low-income households. And for industrial users, electricity producers – among the heaviest consumers of water – have traditionally faced their own troubles with low margins caused by electricity price subsidies.

China has found a compromise in partial market price reforms. Beginning in 2005 local governments began experimenting with tiered pricing systems for urban households and industrial users to charge higher prices for higher water consumption. The reforms have gradually raised the profitability of water utilities. For example, the return on assets of water utilities rose from -0.1 percent in 2005 to 1.6 percent in 2013.

These reforms took a step forward late last year. In December 2013, the National Development and Reform Commission (NDRC) told all localities to implement a tiered pricing for urban households by the end of 2015. The new pricing system will require urban households using over a certain volume of water to pay higher prices. For example, in Beijing urban households using more than 260 cubic meters will now pay three times more to utilities.

Reforming water pricing for urban households is a good first step but industrial and agricultural users are more important to reduce water subsidies.  Urban households only account for 12 percent of total water consumption in China. Therefore, in order to see significant reductions in water subsidies, it is more important that policymakers introduce market-pricing mechanisms for agriculture and business users. These two groups account for 64 percent and 24 percent of national water consumption respectively.  In a 2009 report the World Bank found significant waste and inefficiency in water usage for industry and agriculture. For example only 45 percent of water withdrawn for agriculture was actually used for crops. The water recycling rate for industry was also half that of developed economies. 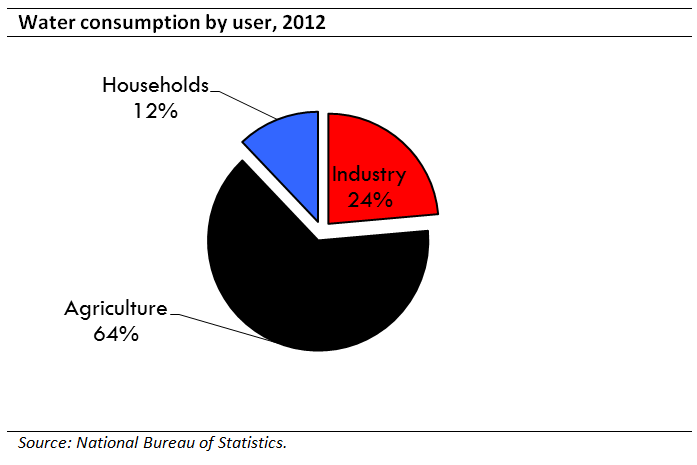 Various localities have experimented with a tiered pricing system for businesses similar to the tiered pricing scheme for urban households for close to a decade now (超定额用水累进加价). It is likely that this system will be rolled out nationwide soon. In January, the Ministry of Water Resources included price reforms to agriculture and business users in its reform agenda. Although a comprehensive plan for reforming rural water prices is in the works (制定农业水价综合改革意见), implementation could take more time. Rural water pricing must proceed gradually to avoid exacerbating urban-rural inequality concerns.