Does China have an SME Lending Problem?

Economies across the globe struggle with providing small and medium enterprises (SMEs) access to loans. Banks are often accused of favoring large customers at the expense of everyone else. China appears to be no exception as Premier Li Keqiang recently criticized Chinese banks for favoring large borrowers.

While it’s true that SME financing is a near-universal problem, some countries do a better job than others. The OECD produces a helpful report, Financing SMEs and Entrepreneurs: An OECD Scoreboard, which shows the share of total lending going to SMEs for a variety of countries. Adding China, which is not included in the report, shows that the country does quite well in terms of SME finance. 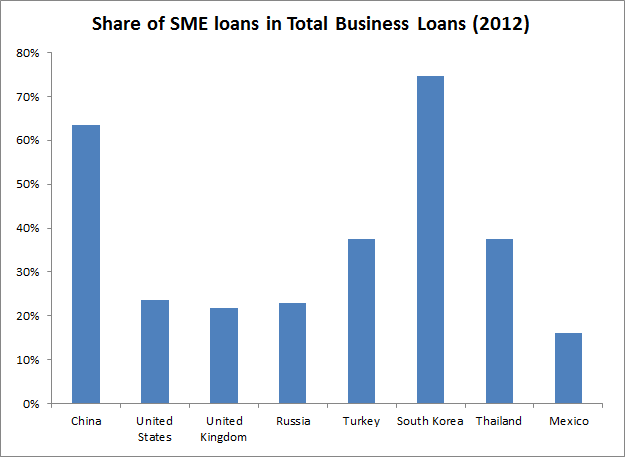 However, the picture is not that simple because countries use different definitions for what constitutes a small or medium sized enterprise with respect to lending. Many of the countries in the report use the size of the firm, typically firms with less than 250 employees, as the cutoff for SME loans. Others use the size of the loan or firm specific factors such as the amount of sales or size of assets.

Adding China to this comparison is particularly problematic because the standard for what constitutes an SME varies significantly by sector. While many sectors use 200-300 employees as a cut off, others are much higher. For  example, for telecommunications the cutoff is 2,000 employees. For Industry, Transportation, Postal Services, and Property Management the number is 1,000 employees. For other sectors, those listed as N/A below, revenues or an asset size cutoff rather than an employee count is used.

It clear from the chart above, that many of the “medium-sized” Chinese enterprises are actually quite large. Perhaps this is why the government introduced a new classification system in 2011 that divided firms into medium, small and micro sizes. When discussing access to finance problems, China’s leaders mostly refer small and micro-sized enterprises, rather than medium-sized firms.

For purposes of an international comparison, however, the small and micro categories is also problematic. The cutoff for small enterprises in many sectors is 100 employees or less, significantly below the 250 employee count that is used is many countries.

Fortunately, there is a way to make some rough adjustments to the Chinese data. The People’s Bank of China provides a sectoral breakdown of borrowing by medium and small enterprises. Removing lending to medium-sized firms in categories with high employee cutoff standards brings the numbers closer to the international norm. For example, we can correct the numbers for industrial firms by removing loans to medium-sized industrial firms (1,000-300 employees) and only using loans to small firms (less than 300 employees).

The other categories don’t match up quite as well because many of them are aggregated together. Information Transmission, Computer Services and Software are all grouped into one single category. The same is true for Transport, Storage and Postal Services and Real Estate Development and Property Management. Because it is impossible to separate out these different components, we will take the most conservative approach and subtract loans to medium-sized firms for all of them. The adjusted result shows China’s SME lending to be around 44 percent, significantly less than the initial 64 percent.

What’s the takeaway from all of this? Despite its reputation, the Chinese banking system does an admirable job of providing SMEs with access to loans. After revising the numbers down to something closer to international standards, China exceeds Russia, Turkey, Thailand and Mexico and is above the average for the group of countries as a whole. Even if you accept the narrowest definition of small firms, the small and micro category, China is still on par with or ahead of many countries. The Chinese financial system has many faults, but under-performing  on SME finance is not one of them.

There is, however, a separate question of whether SMEs are being charged unreasonably high interest rates. This seems to be the case within private lending markets. The Wenzhou Private Financing Interest Rate hovers around 20 percent, more than three times the benchmark lending rate. However, interest rates in the formal banking system appear to be more evenly distributed. Almost 90 percent of loans are made at 1.5x the benchmark lending rate or lower (currently 6 percent for a one-year loan). Therefore, it’s unlikely that on bank loans SMEs are paying anything close to the interest rates seen in private markets. On both access to finance and cost of borrowing, China’s small enterprises are doing better than the conventional wisdom would suggest.