A recent report from the think tank Global Financial Integrity (GFI) identifies China as the largest source of illicit financial flows in the developing world. The report, Illicit Financial Flows from China and the Role of Trade Misinvoicing, identifies $3.75 trillion in illicit outflows during between 2000 and 2011.

The possibility of trillions of dollars in illegal capital flight is certainly worrying. The report’s release generated newspaper headlines such as “China ‘top source’ of World’s Tainted Money,” “Spectre of Capital Flight Slows China FX Reform Drive,” “Capital Outflows: The Flight of the Renminbi,” and “$4 Trillion in Dirty Money Should Worry Us All.”

Has China actually been experiencing catastrophic levels of capital flight over the past decade? The GFI report indicates that China has seen annual outflows equivalent to a staggering 11.1 percent of GDP. If this is true, all other examples of emerging market capital flight pale in significance. In fact, another GFI report attributes 47percent of all illicit financial flows from developing countries between 2001 and 2010 to China.

These illicit flows are calculated through two methods, the World Bank Residual Method and the Gross Excluding Reversals Method. The World Bank Residual Method looks at discrepancies in the balance of payments, attributing differences between the uses and sources of funds to capital flight.  The Gross Excluding Reversals Method estimates illicit capital flows due to trade misinvoicing, differences between exporting and importing country reported trade flows. In the case of China, trade misinvoicing accounts for the vast majority of illicit capital outflows, 86.2 percent.

The process by which trade misinvoicing facilitates capital flight is relatively simple. For example, a Chinese firm sells $100 million of goods to an American firm, but declares to Chinese authorities that the price is only half of that—$50 million. It will then repatriate the declared amount—$50 million—back to China through normal channels. The undeclared amount is kept in an offshore bank account controlled by a subsidiary. The end result is that $50 million evaded China’s capital account restrictions and left the country, i.e., capital flight.

To identify those flows, the GFI report uses the IMF Direction of Trade Statistics. The IMF numbers show that world imports of Chinese goods are significantly larger than declared Chinese exports. China’s reported imports are also larger than world exports to China. These two discrepancies combine to form the total amount of illicit capital flow through trade misinvoicing.

Identifying illicit flows is an important and useful task, but there are two major flaws in GFI report methodology. First, we find that the estimate of illicit outflows is vastly overstated: Our correction of the data reduces the estimated amount of illicit outflows by 75 percent. Second, the significance of the remaining flows is greatly exaggerated.

Let us start with the amounts. This discrepancy between home country and receiving country trade data is not a new finding. In the case of China, trade economists identified this problem more than 15 years ago. This discrepancy is relevant for both research purposes (any empirical economist will tell you that inconsistent data is at the source of many nightmares) and for policy reasons: When the bilateral trade balance between China and the US became a hot political issue, it was highly problematic that China and US official estimates were differing by half.

The main explanation is not false invoicing, but the role of Hong Kong in Chinese trade.  As is well known, Hong Kong acts as an intermediary for a large part of Chinese exporters. Hong Kong’s traders have played the role of middlemen since the opening of China to the world—identifying countries and companies to sell the goods, pricing them, etc. Even if it has decreased over the last decade, the significance of Hong Kong as a channel for Chinese trade should not be understated: Reexports of Chinese goods to the rest of the world through Hong Kong represented around 12 percent of Chinese total exports in the mid-2000s, down from 60 percent in 1992.

In trade, importing countries have a strong incentive to identify precisely the origin goods in order to apply the right tariff or regulation. Exporting countries, however, often do not share the same interest. Most of the Chinese exports which transits through Hong Kong are identified as exports to Hong Kong by China but as imports from China by final destination countries.

Unfortunately, the GFI study simply excludes Hong Kong from the analysis. The authors state that “there are no estimates of how much trade between China and Hong Kong is destined for domestic consumption and how much is merely passing through as re-exports.” 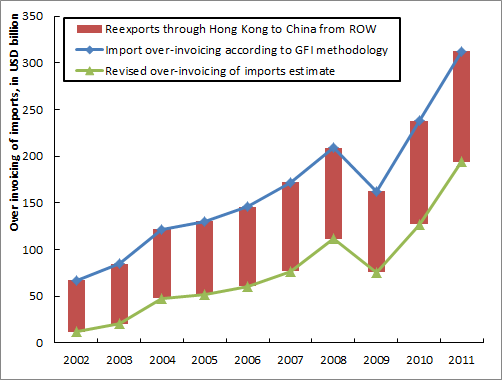 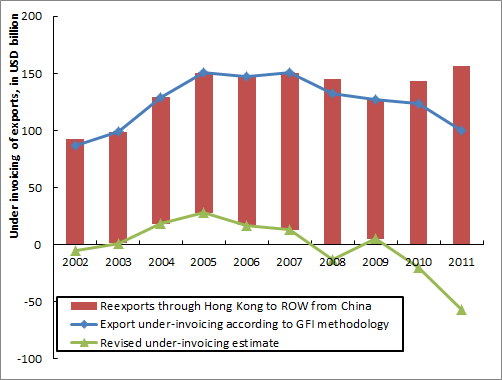 This is incorrect. The reexport data is available from the Hong Kong Census and Statistics Department. In the charts above, we used the same methodology as the GFI report (using the same 10 percent coefficient of correction to subtract the cost of insurance and freight from imports), and then subtracted reexports. The top chart displays the discrepancy on westbound trade (China as an importer), while the bottom chart shows eastbound trade (China as exporter).

Once reexports from Hong Kong are included in the analysis, the hidden flows from exports decline to close to zero, even becoming negative in some years. The revised estimates are dramatically lower. Between 2002 and 2011, we estimate that the average of annual outflows has been of $78 billion—4 times less than the GFI estimate. We do find a worrying trend on the import side (for China), reaching $192 billion in 2011, but it is still much lower than the total of $430 billion found by GFI. On average, the revised amount is still sizeable, around 2.2 percent of GDP, but nowhere near the catastrophic 10 percent of GDP found by the GFI report. One could argue that China also mis-invoices trade that goes through Hong Kong. But even adding a 15 percent rate of trade mis-invoicing on those flows, one still finds outflows over the last decade two-thirds lower than GFI’s $3 trillion estimate.

Not only are the flows of illicit capital much lower, but they are also less pernicious than the GFI study makes them out to be.  The GFI study fails to distinguish the illicit aspect of flows (where tax and regulator avoidance are the main objectives) from outright capital flight (which emerges when there are expectations of crisis and a need to reduce one’s exposure to the country).

With respect to China, it is mostly the former. Capital round tripping is a major phenomenon in China. Funds leave China, enter Hong Kong or an offshore financial center, and then return to China as foreign direct investment. The motivation for this round tripping is to take advantage of tax benefits, greater legal protections, looser capital controls, and other special incentives offered to foreign investors.

In 2011, Hong Kong, the Cayman Islands, and the Virgin Islands accounted for 71 percent of Chinese foreign direct investment. The outsized role of these locations is a trend that has existed since the 1990s. Given the small size of these economies, the vast majority of these funds are coming from other countries. This includes foreign firms using tax shelters and round tripped Chinese capital.

Is this a major problem? Chinese authorities are certainly aware of the round tripping phenomenon, but have not taken aggressive action to prevent it. True, there is a tax revenue loss in the form of incentives given to foreign investors, but it is not nearly as significant as the GFI report would have readers believe. If anything the loss from tax revenue has gone down in recent years as corporate tax rates between foreign and domestic firms have been unified. The greater interest of Chinese policymakers is encouraging foreign investment in order to grow the economy and obtain advanced technology, as opposed to maximizing tax revenue at the margin.

In this context, while it is certainly useful to identify and estimate illicit flows, GFI’s statement that “social, political, and economic order is not sustainable in the long run given such massive illicit outflows” seems like hyperbole. Chinese illicit outflows are much smaller than the GFI report indicates and a considerable percentage end up back in China in the form of foreign direct investment.