Is China's Rebalancing for “Real”?

For the past three years the rapid growth of China’s service sector has been one of the most positive indicators that internal rebalancing – while slow – is moving in a positive direction. In nominal terms the tertiary industry (i.e. services) exceeded secondary industry (i.e. industry and construction) for the first time last year reaching 46.1 percent of GDP, up from just 43.2 percent in 2010. Similarly, consumption’s share of GDP has risen from 48.2 percent of GDP in 2010 to 49.8 percent in 2013. However in real terms, rebalancing – while directionally positive – is much slower than nominal figures suggest.

The problem is prices. China’s industrial sector has been in deflation for two years now. A slowdown in internal and external demand for raw materials and certain industrial goods (i.e. steel) has generated overcapacity, and the prices of these goods have plummeted.  For example, the industrial GDP deflator indicated prices fell 1.4 percent in the first half of 2014 compared with the same period last year. Over the same period growth in the price of services remained relatively resilient, albeit down from the highs of 2010 and 2011. In the first half of 2014, the prices of services in China were up 3.3 percent compared with the same period last year. The inflation in services and agriculture has in fact kept China out of deflation. However, this divergence means that when accounting for inflation, the service sector is actually growing slower in real terms than previously thought, while the industrial sector is growing faster. 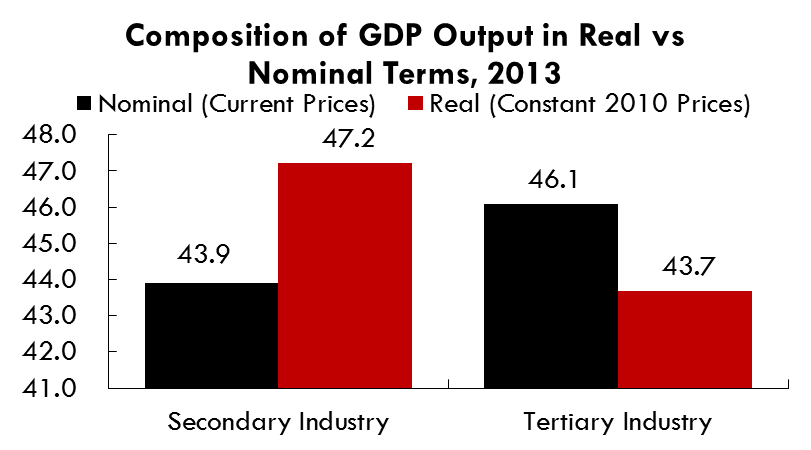 Real adjustments to the expenditure approach to measuring GDP are similar – though less significant - than those for the output approach shown above. Falling prices for industrial goods primarily impacts gross capital formation rather than household or government consumption.  As a result the deflator for gross capital investment has fallen more rapidly than the deflator for consumption. Taking this into account the increase in consumption share of GDP observed over the past three years is less than nominal figures suggest. In 2013, consumption was only 49.4 percent in real terms compared with 49.8 percent in nominal terms. Further fixed capital formation actually increased as a share of GDP rather than the decline observed in nominal terms. 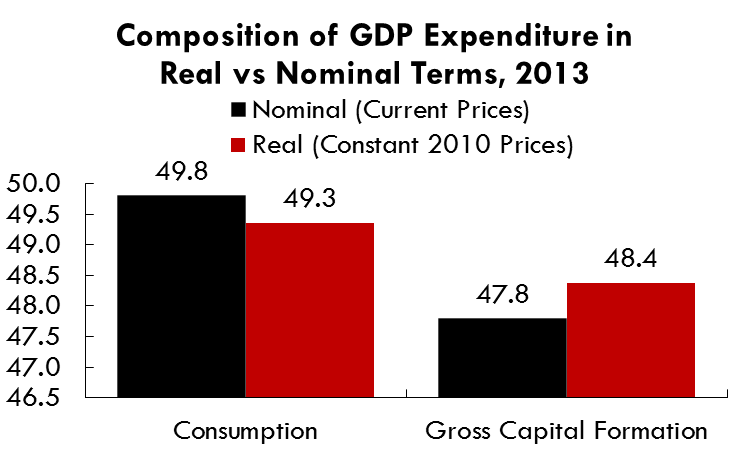 At first glance this real adjustment to consumption and services share of GDP is sobering. China has made much less progress in internal rebalancing than nominal indicators indicate. However, as we have pointed out in the past, rebalancing remains directionally correct. In real terms the service sector has grown faster than industry since the second half of 2012. Consumption also continues to grow faster than investment in real terms. If China is successful in pursuing additional structural reforms such as demonopolization of the service sector and deregulation of interest rates this should provide further impetus for real growth in services and ensure that services will eventually exceed secondary industry to become the largest real contributor to value added output. It will also ensure that gross capital formation will decline as a share of GDP relative to consumption.