Public debt levels in China are an issue of ongoing concern. In particular after the 2009 stimulus concern over the sustainability of debt levels increased when China National Audit Office announced that local government debt rose from 17.7 percent of GDP in 2008 to 26.5 percent in 2009.

A recent IMF working paper suggests these concerns may be justified. The paper entitled “The Impact of Debt Sustainability and the Level of Debt on Emerging Markets spreads” warns that the volatility of sovereign yields for emerging market countries increases when public debt levels rise above 45 percent of GDP. According to some estimates, China has already reached this level. 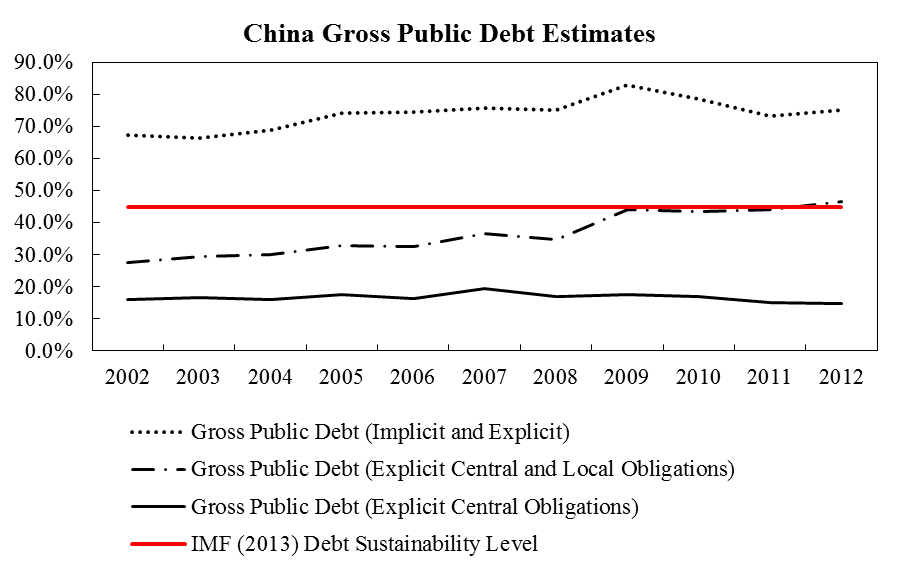 Chinese public debt estimates are almost as volatile as the yields of indebted emerging market countries, ranging from 14.9 percent of GDP to nearly 80 percent of GDP. The difference arise due to treatment of non-central government contingent liabilities, such as local government financing vehicles, central bank bills, policy banks, and quasi-government institutions like asset management firms that have taken over non-performing loans from state-owned banks, the non-performing loans still held by state-owned banks, and debt issued by the former Ministry of Rail. Taking a relatively conservative route – assuming the Ministry of Finance would ultimately pay back both explicit central and local government debt – UBS estimates suggest public debt levels reached 46.7 percent of GDP in 2012 exceeding the debt sustainability level suggested by the IMF.

Does this mean China should be concerned with public debt levels? The answer is of course yes, but there are several reasons why debt yields may be less vulnerable in China than in other emerging markets.

Almost all of China’s government debt is financed domestically, and on a net basis China is a large international lender. This means debt financing cost for the Ministry of Finance is overwhelmingly determined by domestic investors. 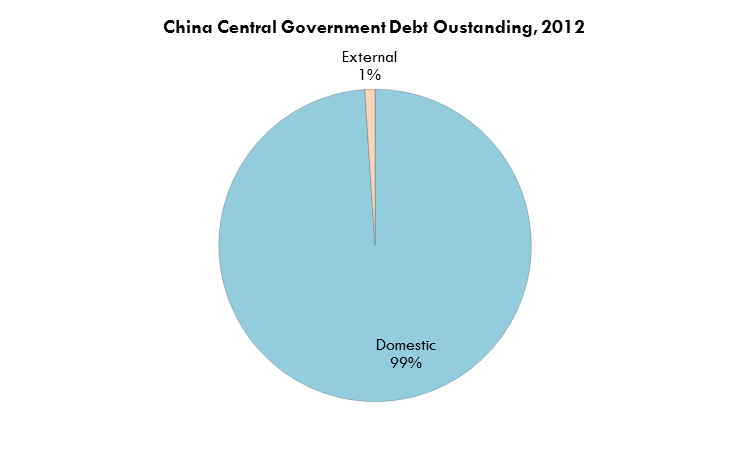 China has a captive market for its debt not only because investors have few other choices but also because most of the banks are owned by the government. If China’s central leadership wanted to increase public debt levels, they could direct banks to use deposits to buy treasury bonds, finance government projects, or simply print money and monetize their debt. The Peoples Bank of China has already maintained financial repression in the form of negative real returns on deposit interest rates for a decade, effectively taxing depositors. But it is still a better deal than keeping money under the mattress.

One lingering question is how foreign or domestic investors assess the risk of Ministry of Finance bonds when actual debt obligations are unclear. Although it is widely assumed that the central government would bail out local governments and their financial vehicles or even quasi-government institutions this is not necessarily true. In 1999 domestic and international financial markets were caught off guard when the central government decided not to bail out the major financial vehicle for China’s largest province – Guangdong International Trust Corporation (GITIC). There is no reason to think that the Ministry of Finance would not allow some bankruptcies among local government financial platforms. Therefore the scope of contingent liabilities facing the government could vary greatly depending on political decisions over who will receive bailouts.

Does this mean China’s public debt levels could increase indefinitely? Certainly not, but the more important question is should they? China is a capital scarce country. Growing public debt levels reduce the amount of capital available to more efficient sectors at the expense of future productivity gains. The problem is compounded in China by interest rate policies and financial market regulations that distort the price of capital to benefit infrastructure development and industrial borrowers. The experience of Japan suggests that growing public debt levels may be sustainable if they are financed domestically but at some point capital misallocation, whether in the form of public debt or industrial enterprise debt could take its toll on China’s growth in the long run.