The plight of China’s private firms, which produce about two-thirds of China’s GDP, has received widespread attention, as private credit to these firms has lagged behind the flow to state-owned enterprises.[1] The latest data show that this trend has continued despite pledges by Chinese leadership to support lending to private sector enterprises.

The flow of bank credit to private firms collapsed after 2013, shortly after President Xi Jinping came to power (see figure below). Private firms partially compensated by turning to shadow banks, but starting in 2017, China’s deleveraging campaign reduced lending by these less well-regulated institutions. Consequently, the growth of private firms has slowed relative to state firms, dampening China’s growth. And as shadow banks called in their loans, many private listed companies were left with no choice but to sell shares, in many cases to better financed state firms. In the process, some private firms were nationalized as state entities became majority owners. And large numbers of non-listed private firms exited, many through bankruptcy. 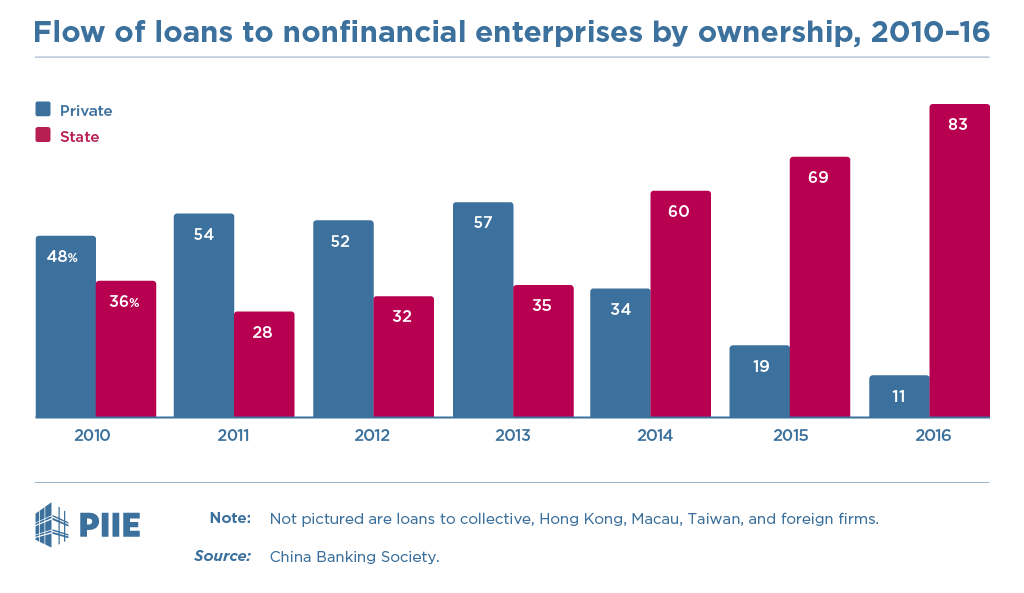 President Xi assured private entrepreneurs in a well-publicized November 2018 meeting that their contributions to China’s growth were highly valued and pledged that their access to credit would be improved. Both the central bank and the bank regulator immediately echoed this commitment.

Has the access of private firms to credit improved? One metric commonly taken as a proxy for private firm access to credit is bank lending to micro and small enterprises (MSEs). But this measure is flawed. For years in which the central bank has presented bank borrowing by firm size cross-classified by ownership, only about a quarter of new loans to MSEs are to private companies while two-thirds are to state companies. A better proxy metric is lending to “people-run” (民营) firms, frequently mistranslated as private. The People’s Bank of China’s coverage of people-run entities includes lending to private, collective, as well as foreign firms, with private accounting for about two-thirds of the total.

On this metric, the flow of loans to private firms continues to lag. Loans to people-run firms in the first quarter of 2019 rose only 6.7 percent, according to a statement by central bank deputy governor Chen Yulu. This is half the 13.7 percent pace of growth of overall bank lending.[2]