China’s Not So Super Development Bank

China’s largest policy bank, China Development Bank (CDB), was recently described as “China’s Superbank” by Henry Sanderson and Michael Forsythe.  The title seems fitting since CDB’s long standing chairman, Chen Yuan, has often claimed that despite being a policy bank CDB offers a lending model superior to commercial banks.  However, CDB may not be so super after all.

China Development Bank – also China's fifth largest bank by total assets – is in fact among the worst performing of China’s top banks. CDB’s financial performance has deteriorated considerably in recent years after reaching a peak in 2005-06 when it outperformed the commercial banks. By 2011, CDB’s return-on-assets was only a paltry 0.71 percent far behind the 1.11 percent for the banking sector as a whole and 1.4 percent for the Industrial and Commercial Bank of China (ICBC) and the China Construction Bank (CCB). 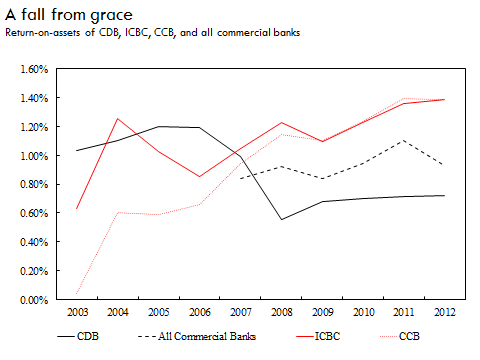 The reasons for CDB’s shortfall are threefold: first, CDB relies on mostly sovereign-rated bond issuance for funding in contrast to commercial banks that rely primarily on deposits. On average CDB has paid more interest on its bond issuance than banks have paid to depositors.

Second, policy objectives to support China’s emerging industries and infrastructure projects may be influencing CDB lending practices. In contrast to Chen Yuan’s claims that CDB has a superior ability to lend to projects with higher payoffs but at a longer term time horizon than most commercial banks, CDB appears handicapped by its status as a policy lender. CDB tends to lend at a lower lending rate than most commercial banks, lowering its risk adjusted returns and suggesting CDB could be lowering its lending rate to accommodate policy objectives. Such a practice would contrast with commercial banks simply looking for the highest risk adjusted returns – increasingly among maturing firms in the private sector.

Another lingering uncertainty related to the policy motivations of CDB’s asset portfolio is the quality of CDB’s loans. In the past, CDB managed to maintain a lower non-performing loan ratio than most commercial banks despite having a portfolio heavy in public infrastructure. Yet this may change. The fact that CDB was the pioneer in lending to local government financing vehicles as earlier as the late 1990s and heavily involved in the 2008-09 stimulus lending the local government financing vehicles may come back to haunt the bank. Many loans made to local government financing vehicles coming to term between 2013 and 2015 have come under increasing scrutiny due to concerns over the quality of their underlying assets and investments in projects with little hope of generating returns.

CDB may deserve credit for supporting China’s rapid infrastructure build-out but it is no “super bank.” China’s commercial banks maintain a growing lead over the policy lender and with CDB now saddled with questionable loans to many local government financing vehicles the future does not look any better.

Europe's Half a Banking Union