Part of the problem with tracking the development of shadow banking in China is that there is no commonly accepted definition of what constitutes shadow banking. The closest thing we have to an official definition is from the Financial Stability Board (FSB), which was tasked by the G-20 to monitor and propose reforms to the global shadow banking system. The FSB’s Global Shadow Banking Monitoring Report defines shadow banking as “credit intermediation involving entities and activities outside the regular banking system.”

Embedded within this definition is an understanding that shadow banking can be viewed in terms of both institutions and activities. However, when it comes to the issue of measurement, the FSB is firmly wedded to an institution-based approach. The “macro-mapping” measure, which is used to calculate a proxy for the size of the global shadow banking system, is based on sector balance sheets and national flow of funds accounts for “other financial intermediaries,” which excludes banks, public financial institutions, insurance companies, and pension funds.

Unfortunately, the FSB macro-mapping approach is inadequate in measuring the true size of shadow banking in China. It’s unlikely that the FSB is using Chinese flow of funds data because it is released with a long lag time and is not well disaggregated. Instead, the FSB is likely relying on financial sector balance sheet data and using the category called “non-bank financial institutions” as a proxy for shadow banking activity.  This is problematic because non-bank financial institutions are a minor part of the Chinese financial system and they do not account for the bulk of shadow banking activities. 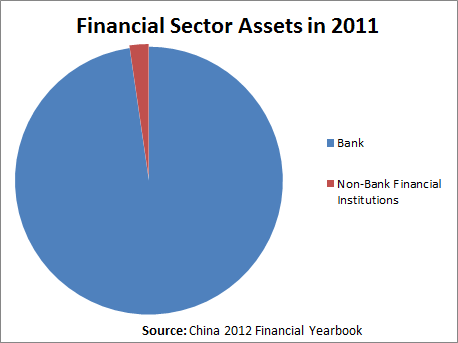 To get a better sense of what is actually going it is necessary look at shadow banking in terms of activities rather than institutions. Shadow banking activities can be broadly defined as credit intermediation outside of normal regulatory channels. This means that if the purpose of a financial activity is regulatory avoidance, it doesn’t matter whether it’s a bank or non-bank entity involved. For China, only focusing on non-bank financial institutions is bound to under measure these activities.

The share of traditional loans as a percent of total social financing in China has declined rapidly since 2009. Trust company loans, bill acceptances, enterprise-to-enterprise entrusted loans, leasing financing, corporate bonds, informal loans, pawnshop financing, small loan companies, wealth management products, and interbank deposit lending have emerged as sources of new financing activity, displacing traditional loans. Goldman Sachs estimates that 39 percent of new financing in 2012 was through the shadow banking system. The reason that many of these new channels have grown so quickly is to avoid existing loan quantity and interest rate restrictions placed on banks. 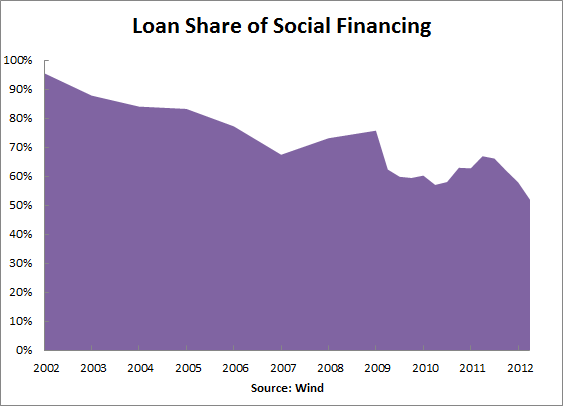 Most of these activities are incompletely measured or not measured at all by the FSB’s approach. The focus on non-bank financial institutions only fully captures the actions of trust and leasing companies. Banks’ involvement in other shadow banking activities such as entrusted loans, bill acceptances, wealth management products, and interbank deposit lending is missed. Also absent is the regulatory arbitrage occurring through the bond market. Banks purchase a large share of corporate bonds, much of which is done as a method to avoid loan-to-deposit ratio restrictions. The most volatile component of the shadow banking system, informal lending, is absent from the FSB’s calculations, perhaps due to measurement difficulties.

The end result is that when viewed through the prism of activities rather than institutions, shadow banking in China is much larger than the FSB’s estimates. Instead of the $400 billion given for 2011, the total was around $2.5 trillion. Thus as a proxy for the true scale of shadow banking activity in China the FSB’s estimate fails. What’s worse is that the FSB’s low estimate may be used as a justification for inaction. Shortly after the report was released, PBoC Governor Zhou Xiaochuan was quoted as saying that the Chinese shadow banking system was much smaller than those in developed countries. Shadow banking in China may be smaller than in the U.S. or Europe, but it is many times larger than the FSB’s calculation, growing quickly, and has direct links to the commercial banks.