With all the relevant economic data out, we can now update our rebalancing indicators for the fourth quarter of 2014:

The real deposit rate improved greatly in 2014 compared with 2013, rising from an average 0.62 percent to 1.25 in 2014. However, as we noted in earlier posts, this increase is due to a slowdown in consumer prices not a change in the benchmark deposit rate. Indeed the net effect of the rate decrease and incremental liberalization of the ceiling announced in November was zero. After reform the effective ceiling on one-year deposit rates remains unchanged at 3.3 percent.

Although the slowdown in residential real estate investment is a concern to some because of its impact on GDP Growth, it is a positive indicator for rebalancing. Residential real estate investment growth slowed to 9.2 in 2014, half the growth rate of one year earlier. In the fourth quarter alone, accumulated growth year-to-date slowed by 210 basis points compared with the accumulated growth of the third quarter. 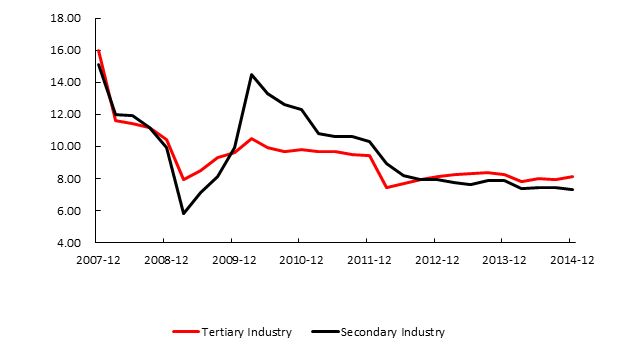 Overall: The prospects for economic rebalancing in China remain slightly positive in the fourth quarter of 2014. Overall China looks better on track for rebalancing this year than last year, with the trend moving higher in the slightly positive category in 2014. Most of the improvement this year is coming from residential real estate investment growth, now half the growth rate of 2013 and one-third the growth rate of four years ago. Real estate is a major contributor to China’s investment led growth model, if this slowdown continues this will continue to be positive for rebalancing. 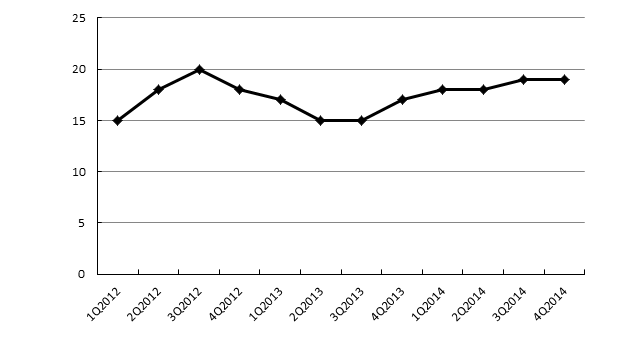 Note: prior period grades have also been revised in line with our change in methodology for measuring household consumption growth.