With all the relevant economic data out, we can now update our rebalancing indicators for the third quarter of 2014:

The real rate on deposits increased slightly in the third quarter of 2014, from 1.0 percent to 1.7 percent. As in previous quarters, the persistence of positive real rates is driven by low inflation rather than an increase in nominal rates. These conditions persist with the CPI dropping to 1.4 percent in November compared with 2 percent in the beginning of the year. This is unlikely to be affected by the recent 25 basis point rate cut in the benchmark deposit rate because, with the ceiling on bank deposit rates raised to 1.2 from 1.1 times the benchmark, the effective nominal interest rate remains unchanged at 3.3 percent.

The growth of residential real estate investment is still falling. By the end of the third quarter residential real estate investment growth was down to 11.3 percent compared with nearly 20 percent growth in the beginning of the year. The government continues to take action to address this slowdown including the recent cut in the benchmark lending rate. Housing investment, while still growing faster than GDP, is doing so at a slower rate than before, therefore this indicator is now slightly negative. 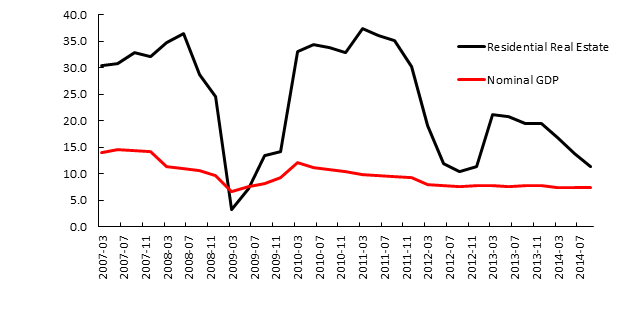 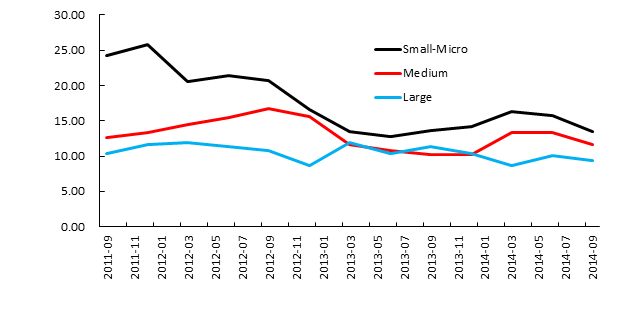 In the third quarter, the growth rate of the secondary sector (manufacturing and construction) and tertiary sector (service sector) decelerated by -0.01 and -0.07 percentage points, respectively. Tertiary sector growth was faster than secondary but not as fast as the second quarter. One of the continued bright spots in the rebalancing story continues to be tertiary sector but still only marginally so.

Overall: The prospects for economic rebalancing in China remain slightly positive in the third quarter of 2014, and overall trends look about the same as the second quarter. Disposable income growth continues to grow slightly slower than GDP growth. Real interest rates remained in positive territory largely due to subdued levels of inflation. The growths of loans to small enterprises slowed modestly but remain faster than large enterprises. Tertiary sector growth continues to be on the right track. Real estate investment growth continues to contract to more sustainable growth levels. However, it remains to be seen whether government policies will arrest the slowdown in the property market. 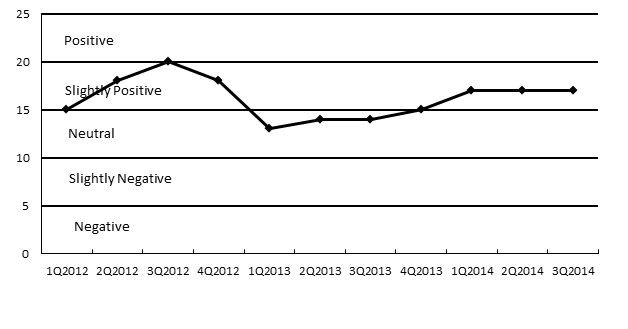