China Private Investment Softens, But Not as Much as Official Data Suggest

Official investment data from China’s National Bureau of Statistics (NBS) show a surge in state investment1 and a collapse in private investment in the first half of 2016 (figure 1). 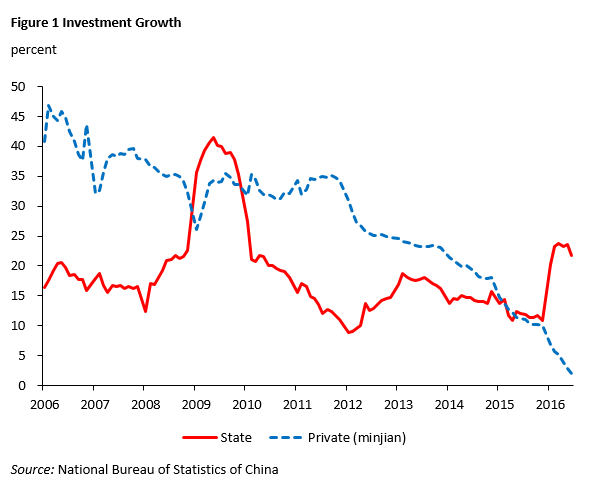 But the figure exaggerates the slowdown in private investment in 2016.  The reason is that the data for private companies is actually for a category called minjian (民间).  While the Chinese authorities translate this as private, it is an aggregate that includes not only private firms but also firms of other types of ownership; indeed it includes just about everything but state and foreign companies.

The surge in state investment in the first half of this year appears in part to be the result of the government’s intervention in the stock market in the summer of 2015.  In an effort to slow the rout in the market, the government intervened to the tune of RMB1 trillion or more.  In the process the state became the dominant or controlling shareholder in companies that previously were not state controlled. The Ministry of Finance in its monthly report  on state-owned enterprises for September showed an unusually large jump in the assets of state companies and explained in its subsequent monthly report covering October that this jump was the result of an increase in state shareholding in some companies that pushed these companies into the state ownership category.  But the NBS waited until January this year to reflect these ownership changes in its monthly investment data.  So the surge in investment by state companies this year is real, but the data are not completely comparable with earlier data since they include investment by firms that have recently migrated into the state ownership category.2

To clear up the confusion surrounding this issue, figure 2 examines the share of investment undertaken by private and privately-controlled companies.3  This figure reflects a gradual but sustained rise in the private share from 2006 (the first year these data are available) through 2011, meaning that the growth of private investment in those years was well above average.  But after 2011 the curve flattens out quite a bit, and in the first six months of this year, the private share actually declined slightly, the first decline in the decade for which these data are available. 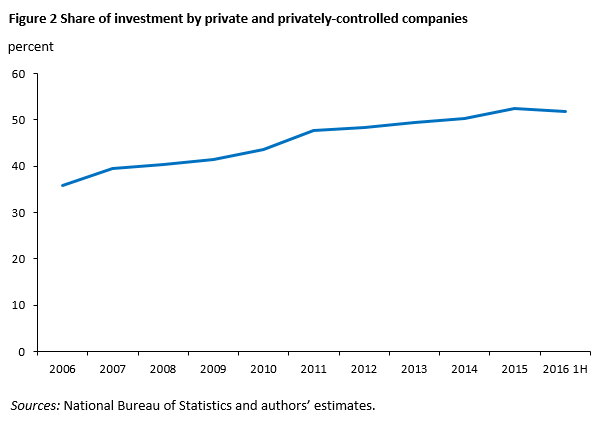 Note: Data for 2015 and the first half of 2016 are estimated on the assumption that the growth of investment by registered private firms continues to be a good proxy for the growth of investment by the universe of registered private firms and privately-controlled firms. If a significant number of privately-controlled listed companies migrated to state ownership in 2015, the figure overstates the share of private investment in 2016.

2. The migration of firms into the state category may account for about one-quarter of the increase in state investment in the first half of this year.