Last November the Chinese Communist Party made an unprecedented step forward in market reforms when it made a commitment to allow the market to play a decisive role in resource allocation (使市场在资源配置中起决定性作用) by the end of 2020. In China the market determines all prices with a few important exceptions. For example, the price of petroleum, natural gas, water, electricity, and the deposit interest rates remain under government influence. Making these prices market determined would by reducing waste and over-investment improve the long-term growth of the Chinese economy. The objective of this article is to introduce an analytical framework to track the progress of market price reforms to energy, water, and capital on a semi-annual basis:

Although the price of crude oil is market determined, the Chinese government sets the retail price for refined petroleum products. Since 2004 retail prices have often not been allowed to keep pace with the increase in the price of crude oil. This policy reduces the profits of oil refining companies and effectively subsidizes users of petroleum products – mostly in the industrial sector. For example, both Sinopec and PetroChina posted substantive losses on their refining operations in 2007, 2008, 2011, and the first half of 2012 .

China is making good progress on reforming the price of refined petroleum products. In January 2009, China introduced a more market determined pricing system whereby retail prices would be adjusted every 22 working days if an index of international crude prices fluctuated by more than 4 percent except if international prices rose over $80 a barrel. This was adjusted again in March 2013 when the National Development and Reform Commission (NDRC) reduced to price adjustment period from 22 to 10 working days and raised the cap from $80 to $130 a barrel. Movements in the retail price of gas deviate only slightly from changes in the international crude oil price. For example, 2014 the average monthly change in the price of retail gasoline was on average within 15 basis points of the monthly change in a composite of Brent, Cinta, and Dubai prices.

Recently the government made some progress on natural gas price reforms but not enough to reduce losses on LNG imports. In March 2014, the government announced that local governments should begin to charge urban households higher prices for higher natural gas consumption by the end of 2015. This follows reforms in June 2013 which raised the price of natural gas for non-residential users by 15.4 percent and introduced a two-tier pricing system in which incremental consumption above the level of the previous year would be subject to higher prices. However, the average price is still low relative to the cost of import natural gas, especially liquefied natural gas (LNG). For example, in Shanghai the cost of importing LNG was on average 1.6 times higher than the city-gate price in 2014. Even taking into account gains from incremental consumption, importers of LNG are likely still losing money. 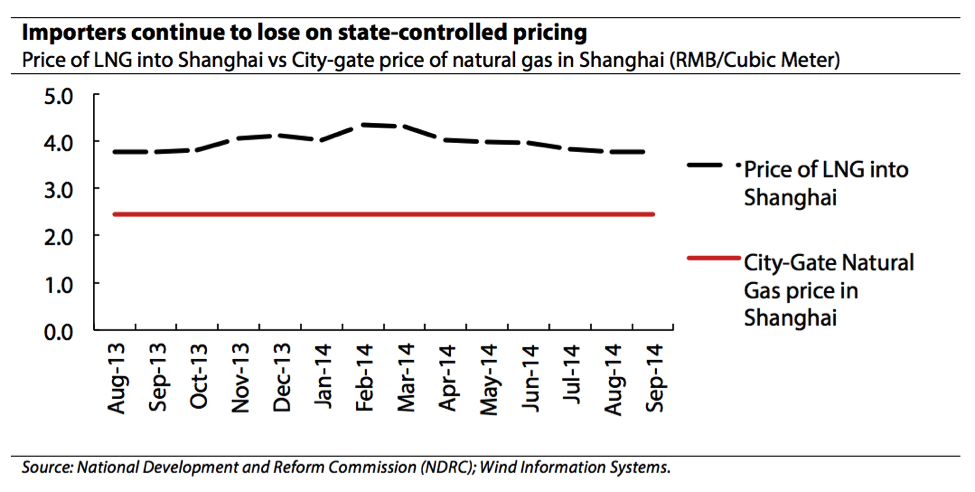 The government is making progress in reforming electricity prices for consumers but more could be done to raise prices for industry. Electric power distributors have been allowed to charge residential end users higher prices for higher consumption since 2012, and for usage during on/off peak hours since the end of 2013. They also began reforms to pricing for industry. For example, beginning this year electric power distributors were allowed to charge aluminum producers higher prices for higher electricity consumption, and some generators are now being allowed to set rates directly with heavy industrial users without government involvement. However, the ROA of power utilities remains low relative to the cost of capital (assumed to be close to the prime lending rate).  And the increases in profits since 2009 are mostly benefitting power generators not power distributors, suggesting end users are still benefiting from subsidized electricity prices.

Local government price bureaus set the price of water. Historically local pricing bureaus were slow to adjust prices to rising costs of water production and distribution, effectively subsidizing the price of water for water intensive users – mostly in agriculture and industry. For example, the entire water distribution and production sector was loss making in 2005 with before tax net losses totaling Rmb 150 million.

Recent reforms to water pricing are promising but there is still substantial room for price increases. Some localities implemented a number of reforms beginning in 2005 to charge users for higher water consumption. Some of these reforms are now being enforced nationwide. However, the returns of water utilities remain low relative to the cost of bank borrowing. This gap implies the water tariff should be at least 20 percent higher than current levels.

The Peoples Bank of China sets a ceiling on deposit interest rate. Historically this ceiling has been set below borrowing rates and often below the rate of inflation. For example the average real return on one year deposits was -0.5 percent between 2004 and 2012. This policy of financial repression effectively subsidizes borrowers (by lowering the cost of lending for banks) and penalizes households.

China has made progress in reducing financial repression. The real return on deposits has been positive for two years. However, progress is mostly due to low inflation not reform. Market reforms to the deposit interest rate reform have been slow. The PBC enacted the last major deposit interest rate reform in June 2012 when banks were allowed to charge 1.1 times the benchmark. Moreover the gap between the returns of bank deposits and bank wealth management products (a substitute for bank deposits) suggests the benchmark deposit rate is too low. In the first half of 2014, the average three-month deposit interest rate was 230 basis points lower than the average equivalent time return on bank wealth management products.

The bar graph below shows the degree to which energy, water, and capital could be undervalued in China. 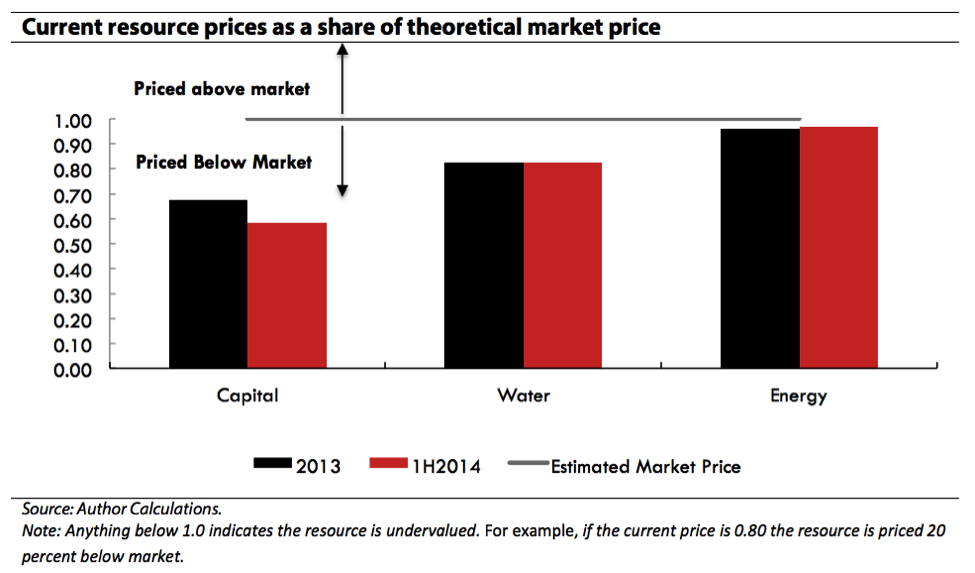 Data from the first half of 2014 indicate China is making some progress in price reforms following the third plenum. Progressive pricing schemes introduced to residential electricity users are now being expanded to natural gas and water.  There was also a breakthrough in the introduction of progressive electricity pricing for aluminum users. However, overall the impacts of reforms thus far have been limited. In particular, the failure to further liberalize deposit interest rates in the past two years has caused the gap between the deposit interest rate and the rate demanded by the market to expand.