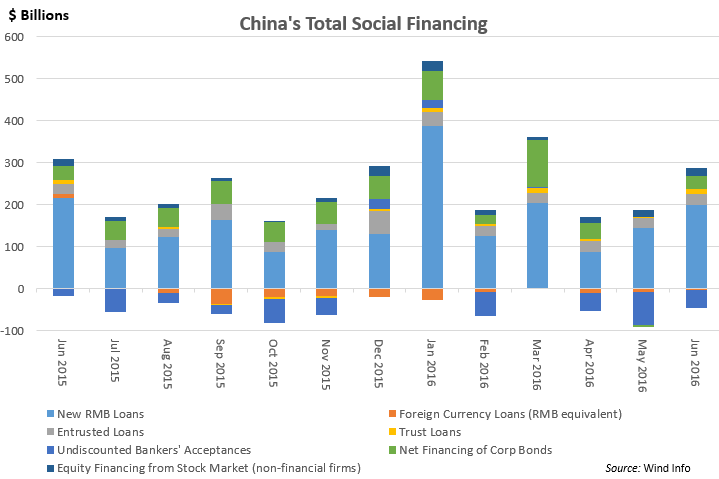 Chinese banks were at it again in June with another steep increase in the amount of lending.  New renminbi loans increased by $200 billion, no doubt a large portion of it going to the state sector, and China’s broader measure of credit, total social finance, expanded by almost $300 billion.  With President Xi calling for “stronger, better, bigger” state-owned enterprises, don’t be surprised to see the recent trend of disproportionate investment and lending going to the state over the private sector continue.  As the Wall Street Journal reported, Xi’s comments “contradicted” Premier Li’s, who said China should “slim down” state firms and become more market oriented.

The continued rise in debt comes with better news about the economy, which grew 6.7 percent in the second quarter, but flies in the face of a recent article by an “authoritative figure” in the People’s Daily, surely originating from President Xi’s top economic advisors.  The figure noted high debt comes with elevated risks, saying it is “not possible nor necessary to force economic growth by levering up.”

By some measures total debt has risen to a ratio of around 240 percent of GDP, way above levels seen prevalent in developing countries but in line with some advanced economies like the US and Japan.  More worrying is that many new loans go to “evergreening,” a revolving loan continuously renewed by the lender, and that it now takes four renminbi of credit to increase GDP by one renminbi.  Further, the loan-loss provision coverage ratio for banks dropped from 280 percent to 160 percent, although that’s still above the China Banking Regulatory Commission’s minimum ratio of 150.

China’s officials clearly recognize that rising debt levels pose a serious threat to economic growth, but their resolve, and ability to contain the problem, is being questioned.  China must slow the pace of debt growth over the next quarter or two in order to restore sentiment in its economy.