Last week China announced several measures intended to stimulate household income growth by easing corporate margins and encouraging private and state investment. The timing of these measures just after the release of the 2nd quarter 2013 data is not a coincidence. The data showed weakening corporate profits are now impacting household income growth.

The leadership has recognized that China is transitioning to slower GDP growth. Yet in order to rebalance the economy Chinese household consumption needs to stabilize or even increase as investment growth slows. That would require disposable income growth to exceed GDP growth. 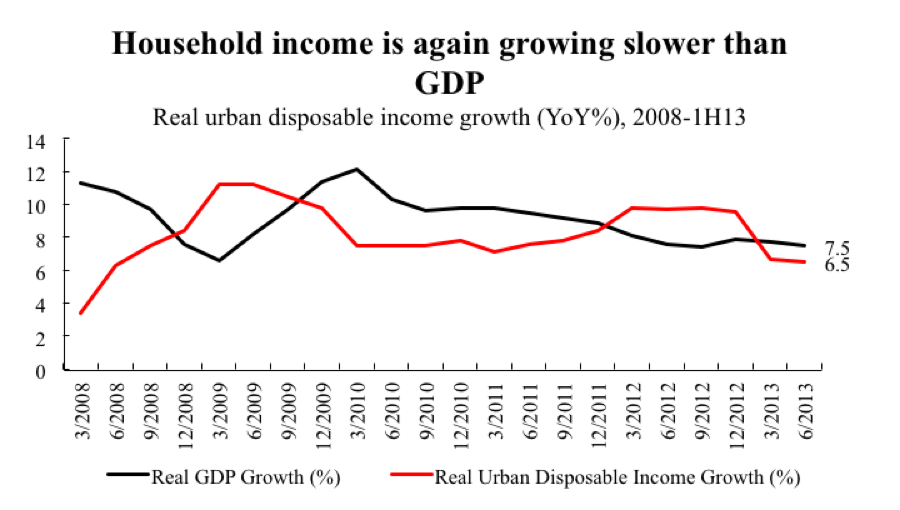 Urban disposable income growth is correlated with household consumption. Urban households consume three times more than rural incomes. If urban disposable income growth is slower than GDP growth then household consumption is unlikely to grow as a share of GDP. Indeed, the contribution of final consumption expenditure to GDP in the first half of 2013 fell to 45.2 percent compared with 60.4 percent in the same period last year.

Policymakers worried about this issue even before the stimulus was announced. In the question and answer document following the second quarter data release from the National Bureau of Statistics, the spokesperson acknowledged that the ministry was “closely watching” (高度关注) weakness in disposable income growth.

Weakening disposable income growth is directly related to troubles in China’s labor markets. The majority of urban household disposable income comes from wages and wage growth has been lagging this year. Average wage growth for enterprise employees was only 10.7 percent in June 2013. This is below the ten year average of 14.4 percent and down from a near term peak of 15.3 percent in June 2011. 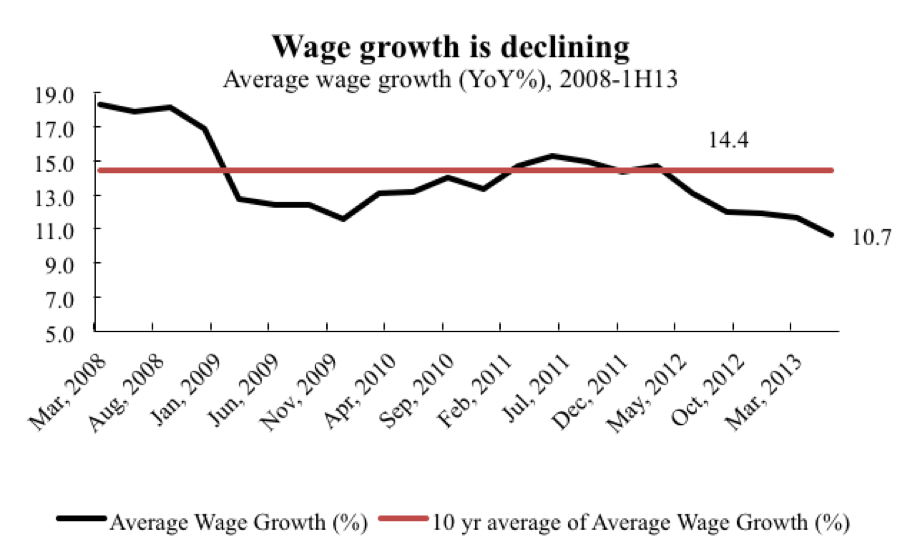 Corporations are facing the lowest margins since the global downturn in 2009 and corporate profits impact wages. Industrial firms are a good indicator of labor market activity in China because they contribute one-third of all wages and employment, and produce the timeliest data on firm level performance. The average profit margin of industrial firms has fallen from 7.6 percent in 2010 down to 5.4 percent in the first half of 2013. Profit margins are now below the 10-year average of 6.3 percent. Weaker profit margins encourage firms to cut costs by freezing wages and new hires, or even cutting jobs in order to sustain profitability. This would directly impact wages, and lower household incomes. 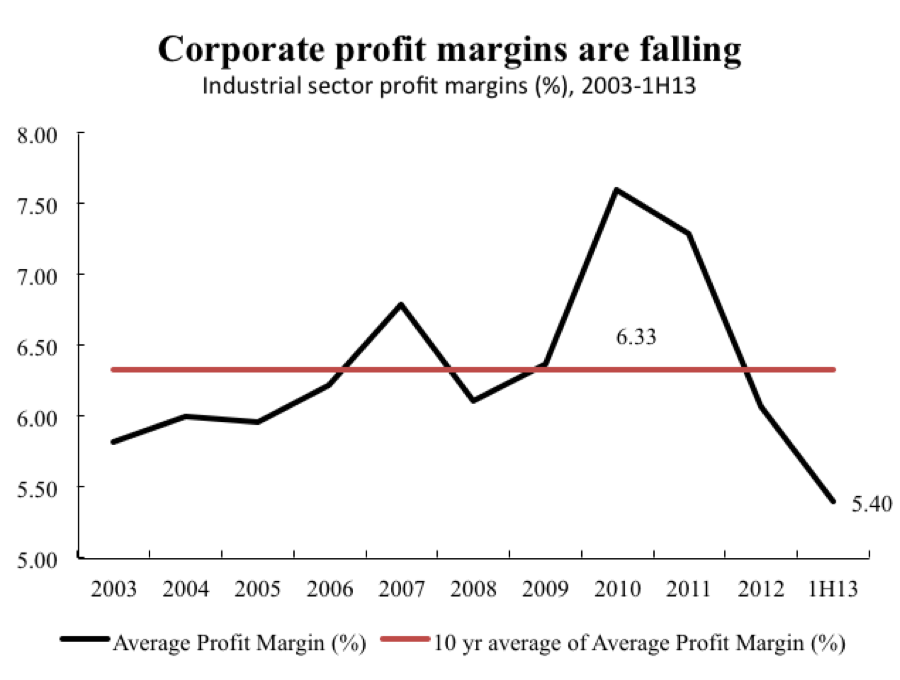 In response the Chinese government hopes the State Council's measures to ease corporate margins will translate into gains for households. The measures include temporarily eliminating business and value added taxes on small/micro businesses, support for exporters, and an expansion of investment in rail. According to the State Council, the measures to cut taxes alone will “directly impact employment and wages for 10 million workers.”

What really distinguishes these measures from previous stimulus - such as 2009 - is the smaller scale and limited focus on investment projects. Cutting taxes and supporting exports namely helps support private investment, while state investment in rail - limited in direction and scope - should be viewed more as an insurance policy to make sure these measures translate into employment and wage growth rather than a contributor to overcapacity.

If new stimulus measures are successful in making household incomes grow faster than GDP once again that would be a clear sign that China is capable of sustaining moderately slow growth of 7-8 percent GDP growth in the near term. The stability would give the leadership more time to gradually introduce structural reforms capable of a more lasting impact on household income growth.