The ASEAN region has become a hot investment destination for China’s outbound investment amid a weak global economy. For example, Xinyuan Mining, a Chinese mining company, has obtained an exploitation license for a 28 mn square meter gold mine in Cambodia. Additionally, Canxiang Mining purchased a portion of Canadian company Angkor Gold’s exploration projects in Cambodia; the first strategic transaction, a $2.4 mn deal for 78 square kilometers out of a scheduled 300 square kilometers, was completed at the start of 2013. In 2012, China’s outbound investment reached $77.2 bn, ranking 5th in the world. The pace is accelerating this year, as the investment overseas reached $29.5 bn in the first four months.The ASEAN region is attractive to Chinese investors due to its rich commodity resources, low labor costs, intrinsic ties to the RMB bloc, and gradually developing capital markets, despite risks including high levels of debt, weak infrastructure and political risk. Overall, the high potential of the ASEAN region will continue to attract Chinese investment in the years to come.

China requires enormous amount of commodities to fuel its economic activity, with large dependence on resource imports, particularly for crude oil, and a primary target for Chinese companies investing abroad has been in resources companies. A win-win arrangement for China and ASEAN countries is to utilize “Infrastructure-for-Commodities” deals which are prevalent in China’s interactions with Africa. During these activities, Chinese companies heavily invest into developing mines and infrastructure, the latter of which makes a significant contribution in local development.

This “Infrastructure-for-Commodities” style has help China win big deals in ASEAN countries over the past years. For example, China’s Dongfang Electric recently completed three 315-megawatt power generating units at Indonesia’s Longwan Power Plant, worth $808 mn, following a history of cooperation escalating in 2007 when the company (along with Shanghai Electric) won a contract for building a power plant valued at approximately $2 bn. Another example is the gold mines in Cambodia, where exploratory licenses were given to 24 local and foreign companies in 2011, and most of these foreign companies were owned by China or Vietnam.

ASEAN to benefit from China’s transition of lower end manufacturing

As China advances up the value added ladder, it is to gradually relinquish some of its dominance in lower end manufacturing, where its massive labor bonus has made it the world’s leading manufacturer in past decades. The growth model shift and the rapidly rising wage levels add pressure on Chinese manufacturers to relocate to cheaper locations for low end labor intensive manufacturing. This transfer will provide increased opportunities for cooperation in production and investment with ASEAN nations. 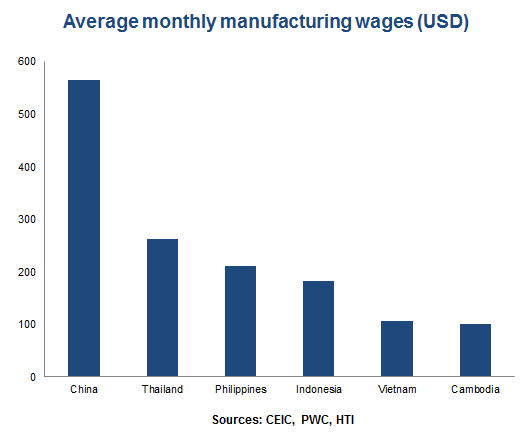 As relocation of the low value added production in China is to happen sooner or later, so it is a good strategy for China’s government to guide an “orderly” transfer of these production lines to emerging neighbors that have good relations with China. This model could be particularly effective in China’s case, as it will have the chance to integrate both a huge domestic market in China and rich resources in ASEAN, and thus can well manage both upstream and downstream flows. A specific model for transfer could be to transition the lower value added manufacturing to the ASEAN countries, and then carry out some higher value added assembly processes in China; the ASEAN region’s geographical proximity to China will allow for easier and cheaper trade and logistics, which will make both the transition process and future supply chains more efficient. Together with matching investment, this “orderly” transfer could help local economies’ development in ASEAN on one hand, and on the other hand, it could create an economic liaison on China, and motivate mutual willingness to keep strong economic and political ties. Smooth relationships with neighbors also could provide China with more freedom to focus on its own growth and on big global scenarios. To incentivize countries to improve win-win ties, China can start this process with friendly neighboring countries such as Thailand, Nepal, and Pakistan; and then extend the process to strategically important neighboring economies.

ASEAN to play an important role in RMB internationalization

The trade situation between China and the ASEAN countries offers great promise for the internationalization of the RMB. There are several reasons why the ASEAN region is favorable for the diffusion of the RMB and a natural step for the internationalization of the currency. Firstly, the trade structure is favorable, as China often has a trade deficit with various ASEAN countries, unlike its trade structure with most developed economies; this allows for the RMB to diffuse into other countries as payment for trade, rather than China taking in the currencies of other countries. Promotion of the RMB as a trade settlement currency, via incentivizing exporters to denominate exports in RMB and continuing currency swap agreements is also a major measure boosting the role of the RMB internationally. The RMB trade settlement in 2012 was up to RMB 2.63 tn, growing by 37% YoY from 2011, but as a proportion of China’s trade, it is still quite limited; only 8% - 9% of China’s trade is currently settled in RMB, with 6% of China’s exports currently invoiced in RMB, and 13% of its imports.

Currency swaps are a powerful tool for facilitating currency internationalization, as there is a large quantity of money exchanged in each arrangement, and directly places the currency with other nations and allows for holding as foreign reserves, as well as utilizing the currency for trade settlements. Currently, China has currency swap deals in place with several ASEAN countries, including Malaysia (RMB 180 bn), Thailand (RMB 70 bn), Singapore (RMB 150 bn), and Indonesia (RMB 100bn), with the value of these deals approximately RMB 500 bn in sum. Given the rapid growth of trade volume and the favorable structure as well as the high volumes of currency swaps, popularizing the use of the RMB in the ASEAN countries is a natural progression in the path to RMB internationalization.

During the internationalization of the RMB, a regional RMB bloc might be formed gradually. Arvind Subramanian and Martin Kessler of The Peterson Institute for International Economics have argued that the RMB has increasingly become a reference currency for East Asia, where 7 out of 10 economies have seen the co-movement of their currency with the RMB to increase and even surpass their co-movement with the USD (40% higher in comparison with the USD) or EUR. In their findings, currencies of South Korea, Indonesia, Malaysia, the Philippines, Taiwan, Singapore and Thailand “more closely track the RMB than the Dollar.” These higher co-movements of their currency with the RMB reflect the natural effects of higher economic integration due to the intensification of trade exchanges with China. In my view, developing a regional RMB bloc could represent an efficient intermediate target and a natural stepping stone before reaching a status of a world reserve currency, as sacrificing the exchange rate channel of economic policy would be both premature and costly. The ASEAN countries, due to their geographical proximity as well as their growing strategic importance both worldwide and to China, represent important countries in the natural development of the RMB.

However, though there are relatively well established capital markets in several of these countries, capital markets are still in the fledgling stages in the other ASEAN countries. For example, capital markets in Cambodia have only recently been developed; the Cambodian Securities Exchange was founded in July 2011 and only began trading in April 2012. The Vietnamese capital markets have a relatively longer history, with its exchange started in 2000, but its total market cap is still significantly lower than its more developed ASEAN peers, at a mere $43.5 bn. The capital market presence in Laos (only 2 listed companies) is negligible, while Brunei and Myanmar are one of the few sovereign states in the world without a stock exchange.

These fledgling markets provide opportunities for Chinese securities firms to provide brokerage services, and chances to cooperate in the development of the markets. For example, Myanmar had been in talks with both Japan and Thailand and signed memorandums of understanding to establish a securities exchange by 2015; while it may seem that the other ASEAN countries may have an upper hand in such cooperation, China’s status as a regional leader should also provide ample opportunities.

The more developed ASEAN capital markets (and potentially the fledgling markets in the long run) act as sources of diversification for asset allocation for Chinese investors. In the new paradigm of the three speed world, the ASEAN countries remain in the fast growth group, and are an attractive investment destination given the medium speed recovery in the US and the low speed growth in the EU and Japan.

In summary, Chinese investors has been seeking out the ASEAN region as a hot investment destination, as it presents great opportunities due to its rich natural resources, its low cost labor which will allow for a transferring of lower end manufacturing, its importance in the internationalization process of the RMB, and the potential of its various capital markets. While there are risks as well, the region nonetheless would appear to be one of the more attractive options for Chinese investment in the near future, given its relatively fast growth compared to the developed economies.

Yifan Hu is chief economist and head of research for Haitong International and a visiting fellow at the Peterson Institute for International Economics.

A Call for an "Asian Plaza"

The Trans-Pacific Imbalance: A Disaster in the Making?