LEADING RESEARCH ON THE GLOBAL ECONOMY

The Peterson Institute for International Economics (PIIE) is dedicated to strengthening prosperity and human welfare in the global economy through expert analysis and practical policy solutions.

Founded in 1981 and led since 2013 by President Adam S. Posen, the Institute anticipates emerging issues and provides rigorous, evidence-based policy recommendations with a team of the world’s leading applied economic researchers. It creates freely available content in a variety of accessible formats to inform and shape public debate, reaching an audience that includes government officials and legislators, business and NGO leaders, international and research organizations, universities, and the media.

Letter from the President

In this newly formatted Annual Report for 2021, I invite you to see why the Peterson Institute’s contribution to public understanding and problem-solving has never been more needed. You will see in this interactive presentation the work of Institute scholars over the past year and the agenda we have laid out for the year to come. You will also see how we have presented facts and objective research in the face of a rising tide of misinformation about trade, finance, and other aspects of globalization.

The Peterson Institute has never shrunk from tackling difficult problems or being controversial when the analyses justify so being. We thrive on the task. The world’s disorders change, but our values remain. We continue to be committed to our mission of pursuing independent, nonpartisan research that elevates public understanding, positively influences and sometimes guides policymakers, and ultimately strengthens economic prosperity and human welfare.

The coming year will be our most exciting in a long time. Among the major areas of scholarly work we are planning are:

In the past two years, as we worked remotely to protect the health and safety of our staff members, we stepped up and expanded our virtual reach to new levels through our website, media outreach, briefings to officials, social media, virtual events, and our flagship PIIE Insider newsletter. Our annual Next STEP (Solutions to Economic Problems) Global Conference in Singapore this year will focus on sustaining prosperity amid rising technonationalism. We hope to return to regular vigorous in-person and virtual hybrid debates and interactions, while building on the momentum we gained in audience size and public relevance.

As always, I wish to express wholeheartedly our gratitude to our stakeholders and supporters—including individuals, private sector corporations, foundations, and government organizations—without whom we could not establish a beachhead of knowledge pushing back against a morass of self-interest and disinformation. I hope that you will enjoy scrolling through this annual report and take time to see the hard work and impressive results that the entire Peterson Institute team has achieved in the past year and the dedication that we promise in the future.

Confronting the economics
of the ongoing pandemic

The global health and economic catastrophe due to the COVID-19 pandemic provided a mission critical and sobering backdrop for PIIE research in 2021. The arrival and unequal distribution of vaccines and the emergence of new viral variants posed unprecedented challenges for economic policymakers.

“A starkly unbalanced rollout of vaccines across the world will prolong the pandemic, to everyone’s detriment.”

How to manage US supply disruptions and recovery

In 2021, the US economy added the largest number of jobs on record, rebounding from the sharpest employment drop in 90 years, but this progress was accompanied by the fastest inflation in 40 years. PIIE scholars were leading interpreters, forecasters, and policy advisors on the fast-moving developments.

“Chad Bown of the Peterson Institute […] has become a prophet of the global chip trade in the trading world, and if you will, he is the sage of semiconductors.”

Establishing the truth about the
United States and deglobalization

Misleading rhetoric on the effects of globalization on jobs, inequality, and industries has fueled protectionist policies in the United States. PIIE experts continued delivering facts and new analysis about how US policies have evolved and the costs of ongoing withdrawal from and fragmentation of the global economy.

“The notion that environmental, labor, gender and other social goals, as well as faster economic growth, can be achieved by restricting international trade and investment is totally misguided.”

Thinking independently about the
Chinese economy and US-China relations

The Chinese government has mixed market- and state-driven sectors in its economy while maintaining deep ties to the global economy. Its dramatic rise poses challenges to the future of trade, cooperation, and security in the Asia-Pacific region and the world. PIIE scholars have been in the forefront of analyzing China’s economy while recommending constructive policies for the US and the global economic cooperation systems. 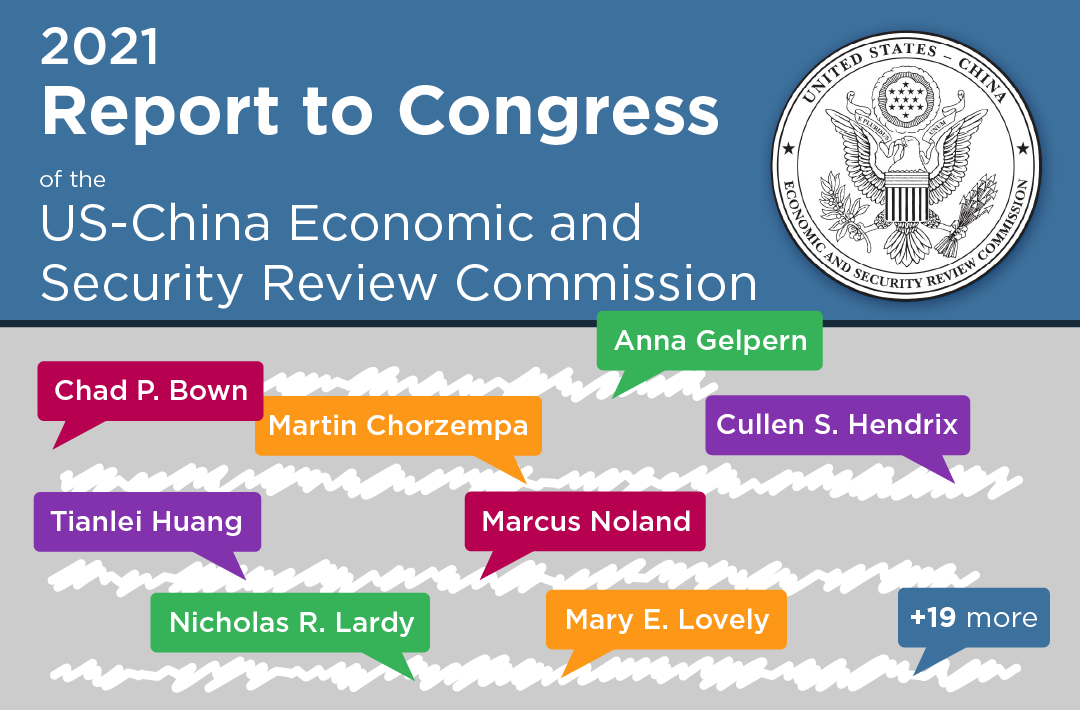 The global pandemic and tensions between the United States and China over trade and technology reinforced PIIE’s determination to pursue realistic policy research and independent analysis of the bilateral issues while maintaining constructive dialogue with senior officials and leading economists in China.

Creating a realistic plan
for decarbonization

The persistent pandemic and rising geopolitical tensions have complicated the goal of decarbonizing the world’s economies as called for by a range of international accords. The immense scale of that goal requires a thorough rethinking of policies on trade, investment rules, energy, finance, transportation, housing, technology, manufacturing, agriculture, and even services.

Much remains to be done before the economic impacts of decarbonization strategies have been fully assessed [...] Macroeconomists must catch up with a fast-changing reality.

The international trading system is beset by problems, including outdated trading rules, a moribund binding dispute settlement system, additional protectionism driven by the pandemic, and how to adapt policies to combat climate change. PIIE offered practical solutions for reform and explained how trade could play a constructive role in alleviating these problems.

The global economy can remain stable only if it produces results seen as fair and equitable. PIIE scholars addressed policies affecting the rights and wellbeing of the workforce, gender disparities, and the suffering of refugees and immigrants.

The Cashless Revolution: China's Reinvention of Money and the End of America's Domination of Finance and Technology by Martin Chorzempa (PublicAffairs, October 2022) 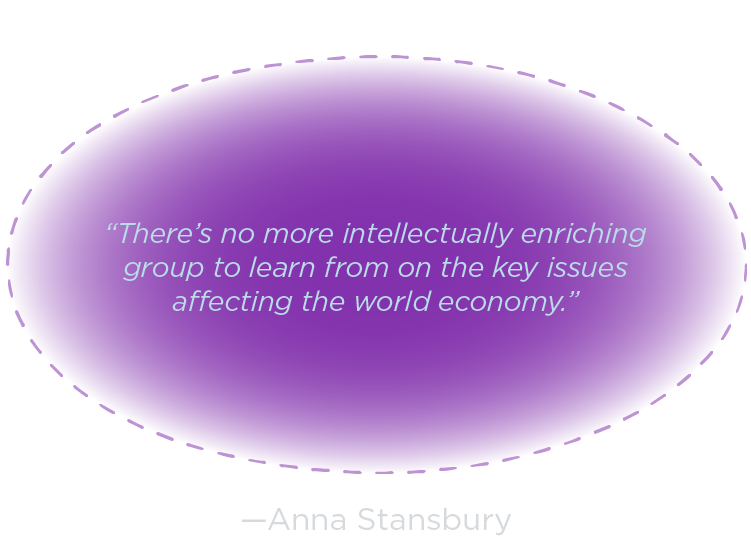 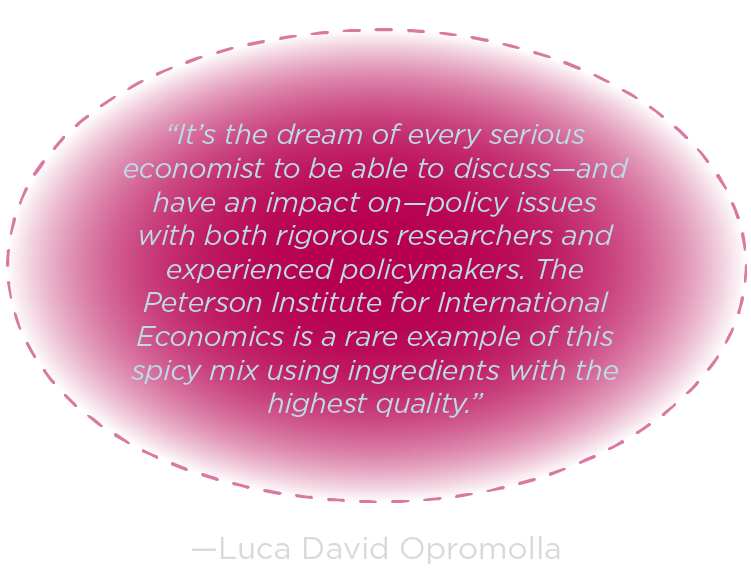 Adam S. Posen was awarded the Order of the Rising Sun, Gold Rays with Neck Ribbon, by the Government of Japan, one of its most prestigious decorations.

Olivier Blanchard was named a commandeur de l'ordre du mérite, a civil order of merit awarded by the President of the French Republic.

Marcus Brunnermeier was elected President of the American Finance Association and 2023 Program Chair.

Karen Dynan cochaired the Social and Economic Science division of the National Science Foundation and was appointed to the Aspen Economic Strategy Group. 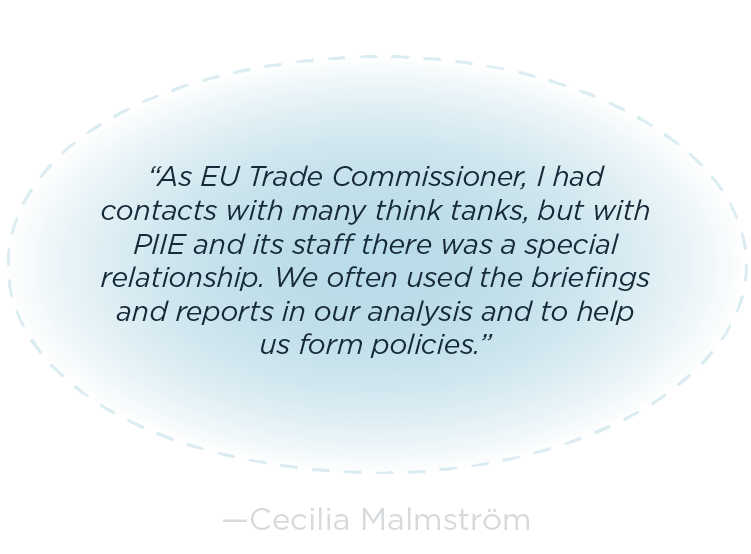 Pinelopi Koujianou Goldberg served as President of the Econometric Society and was named Distinguished Fellow of the International Economic Association.

Patrick Honohan was elected Treasurer of the Royal Irish Academy. He also testified to the UK House of Lords on central bank digital currencies in November. 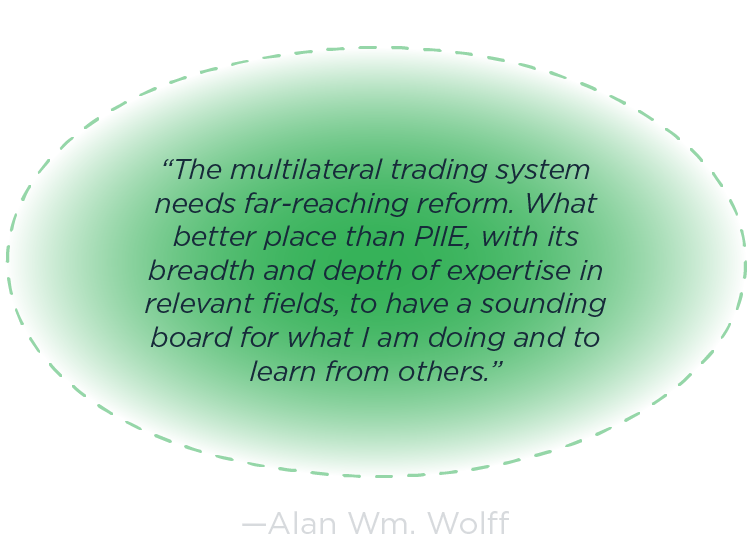 Katheryn (Kadee) Russ was promoted to professor of economics at the University of California, Davis and appointed coeditor of the Review of World Economics.

Anna Stansbury was appointed assistant professor of work and organization studies at the MIT Sloan School of Management.

David Wilcox was appointed vice chair of the Federal Economic Statistics Advisory Committee (FESAC) and will become chair in June 2022.

The Peterson Institute’s annual budget of $13 million is funded by donations and grants from corporations, individuals, private foundations, and public institutions, as well as income on the Institute’s endowment. Over 90% of its income is unrestricted in topic, allowing independent objective research. The Institute discloses annually all sources of funding, and donors do not influence the conclusions of or policy implications drawn from Institute research. All research is held to strict standards of replicability and academic integrity.