US Auto Tariffs Under TPP

As shown in previous posts, the United States is not the most liberalized member of the Trans-Pacific Partnership (TPP) in terms of tariff reductions, particularly in important sectors of the US economy, such as the auto sector. For the United States, the importance of the auto sector in the TPP focused on Japan: Japan is a larger exporter of autos, and historically, US policy has been to prevent Japanese cars from entering the US market, as was the case with Japan’s Voluntary Export Restraints in the 1970s. Today, one of the remaining trade barriers on the US side are tariffs on imports, most notably the 25 percent tariff on trucks—though to note, 10 percent of motor vehicle tariffs were already zero before the TPP. In the TPP, the United States agreed to eliminate auto tariffs for all TPP members, but the phaseout timeline shows that the United States is still wary of liberalizing tariffs for big players in the auto sector like Japan.

The chart shows the base tariff rate (or MFN tariff) for different types of vehicles currently in place in the United States, plotted against the number of years until a particular tariff expires in the TPP. Since the United States negotiated a tariff schedule for each partner country, the chart groups TPP partners by the year that auto tariffs expire. It becomes immediately clear that the United States has significantly different levels of protection for different partners. For six members, all auto tariffs expire immediately—though in some cases, like Canada and Mexico, tariffs were lowered to zero in earlier agreements. Four countries will see auto tariffs expire after 10 years. Finally, Japan’s duty-free access to the US auto sector is not realized for at least 25 years following implementation of the agreement, effectively excluding the auto sector from liberalization for Japan. In practice, this long horizon for tariff elimination may not have a large effect on Japanese automakers, since most moved production to the United States to avoid earlier limitations on Japanese exports. Nevertheless, this differentiation of tariff schedules signals a lack of commitment towards liberalizing the US auto sector.

US Tariffs on Motor Vehicles in the TPP 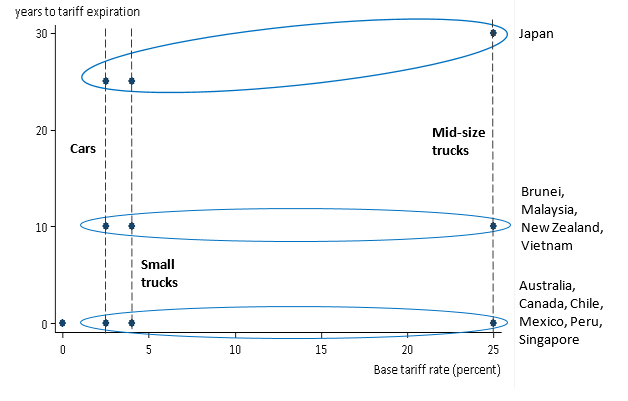 Shooting Ourselves in the Hoof