The Federal Reserve implemented its first rate hike last December. At that time, the Fed anticipated another four hikes in 2016 as part of the process of normalization. By the time of their March meeting, the median Federal Open Market Committee (FOMC) participant expected only two hikes this year. And market participants now expect only one hike.1 With the general outlook for a very gradual increase in interest rates in the United States, the US economy will be flirting with the zero lower bound (ZLB) for some time to come. That also implies that any negative shock to the economy would send the policy rate to zero very quickly.

In this context, one may ask the following question: What is the probability that the federal funds rate will hit the ZLB within the next few years?

The FRB/US model—a large-scale macroeconometric model used at the Federal Reserve for policy analysis and forecasting—provides an answer. It allows one to compute the conditional probabilities of two different ZLB events as of the second quarter of 2016. The blue bars indicate the probability of the federal funds rate going below 26 basis points at least once between now and the end of 2020. The red bars denote the likelihood that the policy rate will be below 26 basis points for at least eight consecutive quarters sometime within the next five years.

The baseline scenario of these stochastic simulations uses the FOMC’s projections released in March,2 which presume two rate hikes by the end of 2016. The probability of hitting the ZLB depends importantly on the assumed distribution of likely shocks to which the economy will be subjected. Those shocks are drawn from the set of historical residuals of the model’s stochastic equations. To explore the sensitivity of these results to this assumption, three historical periods were considered: (1) 1970–2015, which is the full sample for the model, (2) 1970–2007, which excludes the Great Recession, and (3) 1984–2007, which is the Great Moderation period. 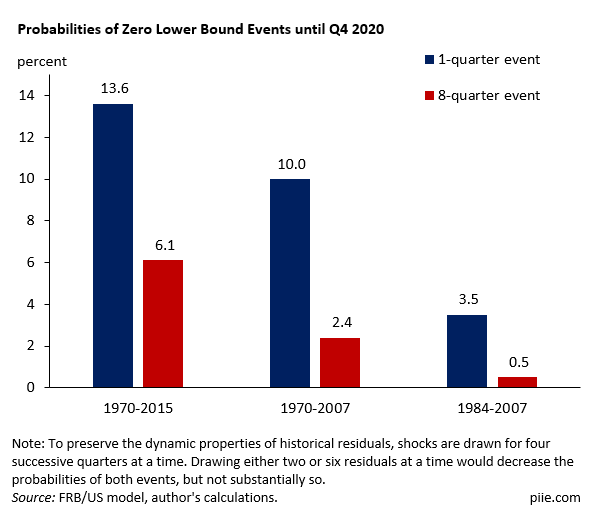 The rightmost blue bar in the chart demonstrates why the ZLB was not considered a big problem during the Great Moderation: Despite the current near-zero level of the policy rate, the probability of hitting the ZLB is as small as 3.5 percent when considering the 1984–2007 period. As seen by the middle blue bar, the estimated likelihood becomes almost three times larger using the full sample up until the Great Recession—about 10 percent. Finally, if one considers the whole economic history since the 1970s as a better indicator of the future, the probability of a one-quarter ZLB episode increases fourfold to 13.6 percent, a level that should no longer be ignored by market participants or policymakers. The same pattern is observed for more serious episodes where the ZLB is hit for eight consecutive quarters, though the probabilities are correspondingly lower.