China Chart of the Week: Headwinds to Further Residential Investment

Earlier this week the Governor of the Australian central bank, Glenn Stevens, remarked in the opening of his monetary policy statement that the slowing property market in China would present a “near-term challenge”. This sentiment is being shared across many economies dependent on China’s heretofore healthy appetite for commodity imports. Embedded in that statement was also the implication that the property market should rebound beyond the immediate slow-down. Looking at the data shows that slumps in residential investment are not unprecedented. Indeed, in recent months, authorities have loosened controls on the property market in an effort to bolster demand, leading some to anticipate a turnaround.

However, there is serious concern that the upside for continued residential housing growth is limited, as evidenced by the household survey conducted by the Southwestern University of Finance and Economics earlier this year. It showed, among other things, that the urban homeownership rate (住房拥有率) is already 87% (30 percentage points higher than in the U.S.). Furthermore, rural homeownership is even higher at 97%, challenging the thesis of further pent-up demand from rural residents. The survey also shows that even with restrictions on second and third home purchases, first time homebuyers represent less than one-fifth of housing demand, which may explain why the urban vacancy rate (住房空置率) is around 22%. Even at its current, slowing pace, Chinese residential housing investment has still been growing as a share of GDP. Overcapacity in the housing sector will likely present a headwind for future real estate investment. 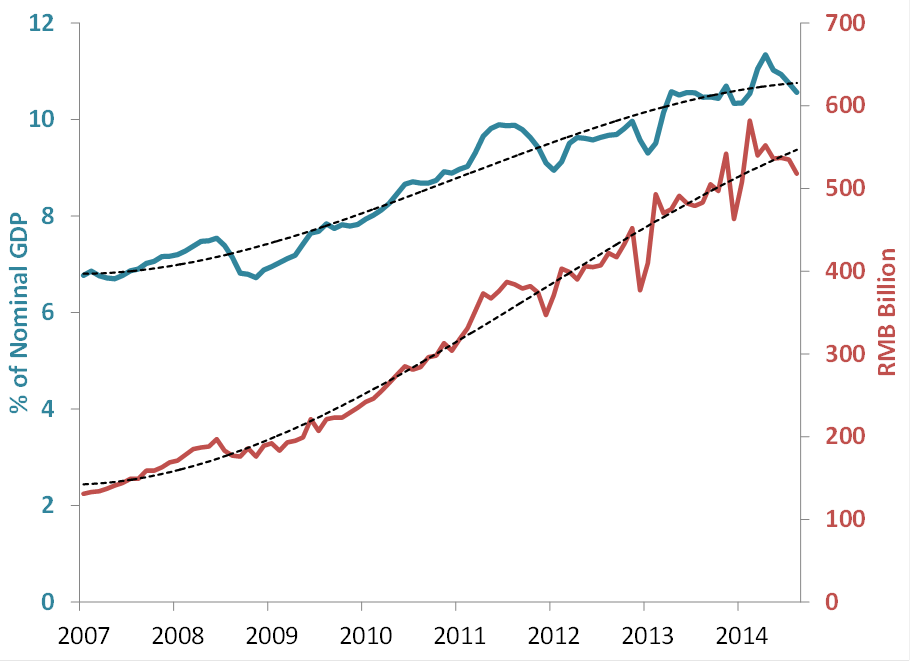 Thanks for the update