India Must Reverse Its Deindustrialization

Can India be a manufacturing powerhouse? Three developments make that question salient today. Looming ahead is the demographic bulge, which will disgorge a million young people every month into the economy in search of employment opportunities. Rising labor costs in China create opportunities for low-skilled countries such as India as replacement destinations for investment that is leaving China. And a new government assuming power later this month offers the prospect of refashioning India in the image of Gujarat, which has been one of the few manufacturing successes.

Thus, the desirability of India becoming the next China or the next Gujarat is not in doubt. The real issue, and the open question, relates to feasibility. And there is a sobering fact here: India has been deindustrializing, big time.

In a piece that one of us wrote recently, we noted the fact, first pointed out by Dani Rodrik, that "early" or "premature" deindustrialization is happening worldwide. At any given stage of development, countries are on average specializing less in manufacturing. Furthermore, the point in time at which the share of industry peaks (alternatively, the point at which deindustrialization begins) is happening earlier in the development process.

What has been the equivalent development within the Indian states? The table provides data, showing the year in which the share of registered manufacturing in GDP peaked, the peak level of manufacturing, and the per capita GDP associated with peak manufacturing levels. 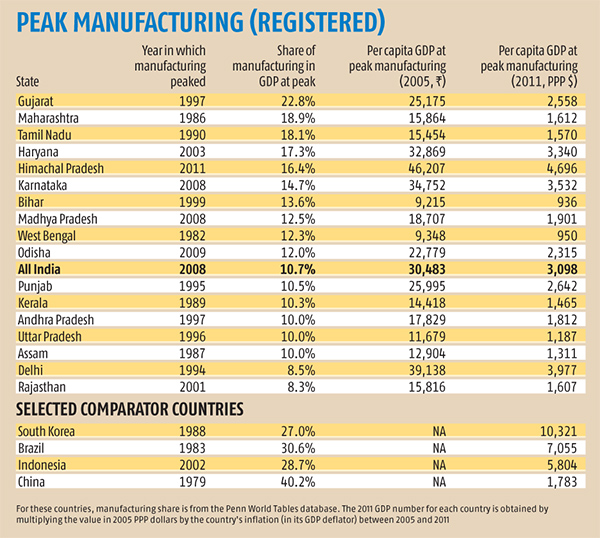 A few points are striking. Gujarat has been the only state in which registered manufacturing as a share of GDP surpassed 20 percent and came anywhere close to levels achieved by the major manufacturing successes in East Asia. Even in Maharashtra and Tamil Nadu, manufacturing at its peak accounted for only about 18 to 19 percent of state GDP.

Second, in nearly all states (with the possible exception of Himachal Pradesh), manufacturing is now declining and has been doing so for a long time. The peak share of manufacturing in many states was reached in the 1990s (Gujarat and Tamil Nadu) or even in the 1980s (Maharashtra).

Third, and this is perhaps the most sobering of facts, manufacturing has even been declining in the poorer states: States that never effectively industrialized (West Bengal, Uttar Pradesh, and Rajasthan) have started deindustrializing.

Some comparisons are illuminating. Take India's largest state, Uttar Pradesh. It reached its peak share of manufacturing, of 10 percent of GDP, in 1996 at a per capita state domestic product of about $1,200 (measured in 2011 purchasing power parity dollars). Indonesia attained a manufacturing peak share of 29 percent and at a per capita GDP of $5,800. Brazil attained its peak share of 31 percent at a per capita GDP of $7,100. So, Uttar Pradesh's maximum level of industrialization was about one-third that in Brazil and Indonesia; and the decline began at 15 to 20 percent of the income levels of these countries.

These findings serve to emphasize that if India is to become a manufacturing powerhouse, it has to reverse a process that has been entrenched for several years in several states. It is not that patterns of specialization cannot be changed. But that reversal will require a lot of hard work, so that a critical mass of policies is changed to create an environment that is conducive to making high-productivity manufacturing attractive to investment, domestic and foreign.

Time, or rather the weight of history, is not on the side of Indian manufacturing.