In a recent Bloomberg interview, Secretary of Commerce Wilbur Ross stated clearly the Trump administration’s concerns over the US trade deficit with Mexico, underscoring that the key objective of renegotiating the North American Free Trade Agreement (NAFTA) will be to reduce or even eliminate the bilateral deficit. Leaving aside the fallacy of focusing solely on the trade deficit as the basis for a trade negotiation, there may be other problems in the US stance towards Mexico. Notably, if NAFTA ultimately unravels because Mexico and the United States are unable to find common ground, the peso will likely devalue substantially. A permanently weaker peso relative to the dollar would eventually widen the bilateral current account deficit even further, contrary to what the US administration wants.

Many insist that prior to NAFTA, the United States had only trade surpluses with Mexico. The data do not support these statements. In fact, the United States only had trade surpluses with Mexico for four years, between 1991 and 1994. Merchandise trade deficits had previously hovered around $3.5 billion, as the figure below shows. While it is certainly true that the bilateral deficit has grown substantially between 1985 and 2016, it is also true that it has been fairly stable since 2010, reflecting the fact that import growth has been matched by export growth.1 It is also worth noting that the bilateral deficit with Mexico is currently 15 percent smaller than at its peak in 2007. 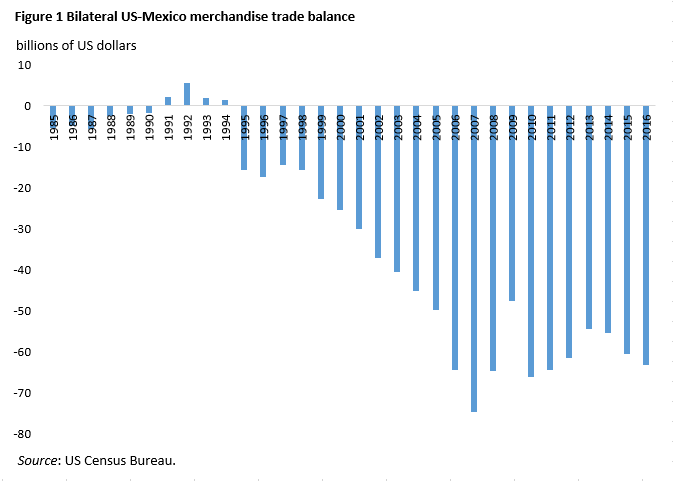 However, the Mexican currency has been on a seesaw since early 2016—which does not help close the trade deficit gap. Over the last 14 months, the peso has devalued by more than 12 percent against the dollar, reaching a peak devaluation of 26 percent in January 2017 relative to January 2016. Although the peso has regained some ground since mid-January, partly as a result of heavy foreign exchange market intervention by the Central Bank of Mexico, the currency remains substantially weaker relative to the dollar when compared to the average during the first half of 2016, and during all of 2015.

If NAFTA were to collapse as a result of escalating tensions between Mexico and the United States, tariffs on imports to each country would go back to their previous World Trade Organization (WTO) most favored nation (MFN) levels. About one third of US imports from Mexico consist of automobiles, as well as their parts and components. The average US MFN tariff for passenger vehicles is 2.5 percent, while that for trucks is 25 percent. If NAFTA came to an end, the peso would certainly devalue by much more than 2.5 percent, and possibly more than 25 percent, as underscored by its recent behavior. Mexican produced cars would likely become more competitive in the United States, further adding to the trade deficit.

On the other hand, Mexico is the United States’ third largest agricultural export market. Table 1 shows the average Mexican MFN tariff for the leading products that the United States exports to Mexico.

Hence, without NAFTA, US agricultural exports would become much more expensive to Mexican consumers. In addition, a devalued peso would add to the cost, possibly inducing Mexico not only to cut its agricultural imports from the United States but to switch to a different supplier altogether—and the bilateral deficit would rise.

Which suppliers would Mexico likely switch to? Recently, Brazil’s minister of agriculture, whose family owns one of the country’s largest soybean companies, spoke of enhanced trade opportunities with Mexico in view of rising tensions between Mexico and the United States, as well as Mexico’s overtures towards Brazil. The two countries signed an Agreement of Economic Complementation (ACE no. 53) in 2003 establishing tariff reductions and preferential margins for a number of manufacturing and agricultural products, and in 2015 they entered into negotiations to expand this agreement. Brazil is the world’s leading exporter of soybeans and beef, and the second largest exporter of corn.

If NAFTA collapses and the peso weakens significantly, the United States would likely find itself not only buying more cars from Mexico but exporting less agricultural goods to Mexico. The stability of the US trade deficit with Mexico seen over the last few years would gradually disappear, paving the way for ever-greater bilateral deficits. Certainly, that is not the end result the US administration would like to see, even if they believe NAFTA to be the “worst trade deal ever negotiated.”

1. Two-way services trade is a much smaller magnitude than goods trade, but unlike goods the United States has consistently had a services trade surplus with Mexico, on average $10 billion over the past decade.

Scrapping NAFTA Will Sink the Peso and Expand Trade Deficit