Starting Over on Tariffs: Post-Brexit Trade Agreement Partners for the United Kingdom

India and China in particular impose relatively high tariffs on many products imported from the UK. On paper, such countries have something very valuable to offer UK exporters, and they could make for attractive FTA negotiating partners. Nevertheless, past experience indicates that India and China do not tend to give FTA deals to countries like the UK.

The first topic of business in any FTA negotiation is import tariffs. According to this metric, where do the major economies stack up as potential FTA partners for the UK?

For how many products is it possible for the trading partner to even offer the UK a preferential tariff?

When it comes to import tariffs, FTAs are most meaningful if they reduce tariffs facing UK exporters below the normal—nondiscriminatory, or most-favored-nation (MFN)—rate that the exporters pay if the UK didn’t have an FTA with the partner. 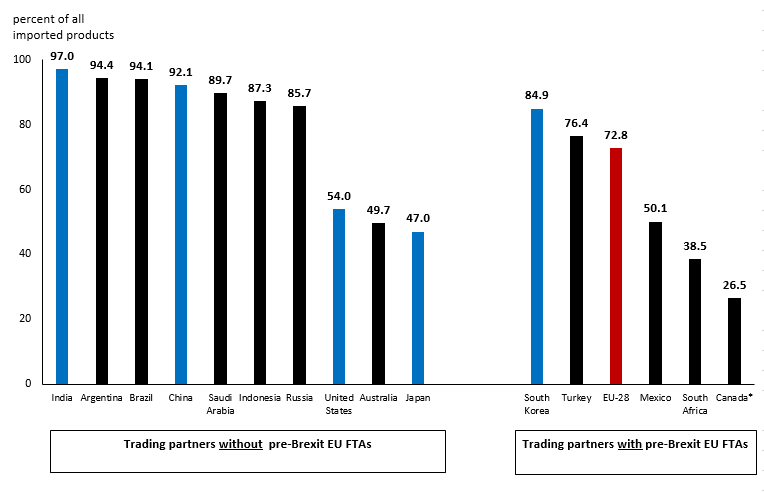 FTA = free trade agreement
* EU-Canada Comprehensive Economic and Trade Agreement (CETA) has been negotiated and signed but not yet implemented.
Source: Constructed by the author from the WTO’s World Tariff Profiles 2015.

From this perspective, India is a very attractive partner with which to negotiate an FTA. For 97 percent of products that India imports from the UK—and thus almost regardless of what type of good a UK firm might produce—an FTA could end up with the Indian government reducing the import tariff below the rate that UK exporter currently pays.

China is a similar story, as 92 percent of its imported products are “preference possible” in this way.

The United States and Japan are different. Only around 50 percent of the products these countries import have normal tariffs that remain above zero. Put differently, a UK FTA with these partners would lead to a tariff reduction for only 50 percent of products potentially exported by UK firms to these markets.

The right panel of figure 1 illustrates the UK’s “current” FTA partners, or the countries with which the European Union already has an FTA. These are trading partners with which UK-specific FTA negotiations may need to start over once the terms of Brexit are finalized.

South Korea has the most “preference possible” products. For example, 85 percent of UK products exported to Korea would be subject to an import tariff that UK exporters do not currently pay due to the EU’s FTA with Korea.

Finally, figure 1 serves as a reminder that the EU itself retains “normal” import tariffs that are greater than zero for nearly three-quarters of all products from trading partners with which it does not have an FTA. This underscores the importance of the UK signing an FTA with the EU, to which it ships roughly 50 percent of its exports.

How high are the existing import tariffs for the UK’s potential FTA partners?

India, China, and South Korea have a lot of products for which they could potentially offer preferential tariffs to UK exporters, whereas trading partners like the United States and Japan have relatively few. But even for these products, are UK FTA negotiations on tariffs worth the effort? Perhaps these tariffs, while greater than zero, are simply “nuisance” taxes that the exporters pay but are not all that problematic.

Figure 2 ranks from high to low the trading partners’ average tariffs facing UK exporters on these “preference possible” products. The pattern lines up with figure 1. The partners with a lot of imported products for which it is possible to grant UK exporters a tariff preference also tend to have high average tariffs on those products.

The tariffs on UK exports of these products to India average 13 percent and to China average 10 percent. On the other hand, not only do Japan and the United States have far fewer products on which to offer UK exporters tariff preferences, but the tariff cost savings of an FTA covering these products would be relatively low, at only 5 to 6 percent.

Finally, the right panel of figure 2 underscores the need for the UK to maintain FTA terms with its current FTA partners. Tariffs facing UK exporters to each of these partners would snap up considerably if the FTA were revoked: increasing from 0 to 17 percent, on average, for sales to South Africa, to 13 percent for sales to Turkey and Mexico, and to 7 percent for sales to the European Union. 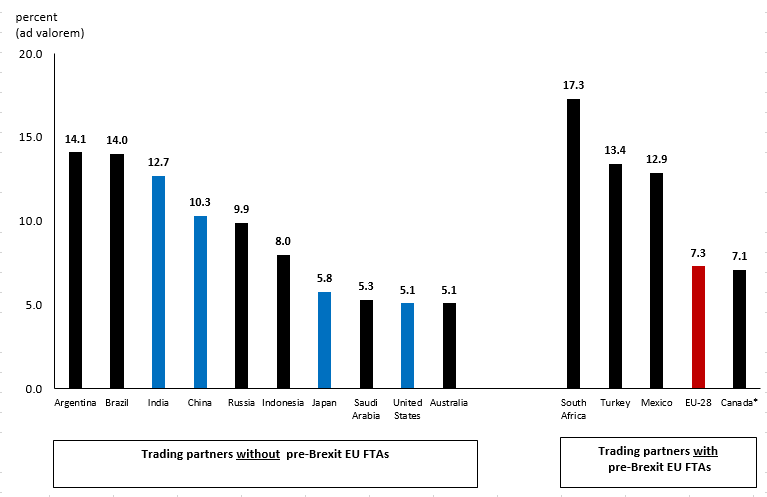 FTA = free trade agreement.
* EU-Canada Comprehensive Economic and Trade Agreement (CETA) has been negotiated and signed but not yet implemented.
Note: Data for South Korea are not available.
Source: Simple average MFN tariffs constructed from Bown and Crowley (forthcoming, table 4) for HS06 products with non-zero tariffs.

What are the odds of a UK FTA deal with these trading partners?

Historically, have these trading partners granted preferential tariffs to exporting countries like the UK? To answer this question, consider the “preference possible” products that each trading partner granted to the group of high-income exporters as of 2014.

On the other hand, the United States—through its FTAs with Canada (NAFTA), South Korea, and Australia—tends to grant many tariff preferences to other high-income countries. And while these data (from 2014) reveal that Japan historically granted few tariff preferences to high-income exporting countries, that may change if the pending Trans-Pacific Partnership (TPP) agreement—which includes Japan, Australia, Canada, and the United States—is implemented. 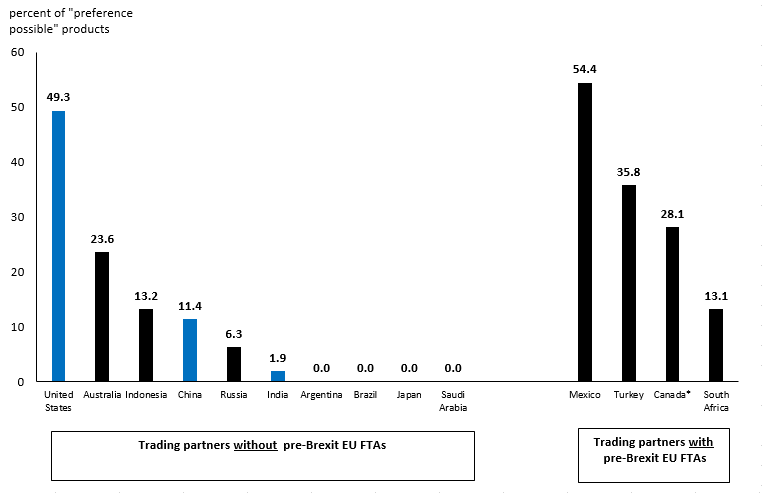 When contemplating with whom to negotiate future trade agreements, the UK should first assess the import tariffs facing its exporters. While India and China appear quite appealing—because each imposes relatively high tariffs on UK exports across almost all products—each has also been among the least open to negotiating FTAs with high-income partners. While there are certainly other important determinants of the UK’s FTA negotiating priorities, the trading partners’ applied tariffs are of first-order concern.

If the UK turns to negotiate an FTA with the United States—which has been more generous in granting tariff preferences to high-income exporters, as meaningless as current preference levels may be—it is likely to find the agreement to involve much more than tariffs. The recently negotiated TPP and ongoing Transatlantic Trade and Investment Partnership (TTIP) agreements go well beyond negotiating import tariff reductions so as to also cover labor, environment, and product standards, as well as ways to achieve regulatory coherence and convergence, and rules to address foreign investment.

Finally, these data point to the first-order need for the UK to negotiate a comprehensive trade agreement with the European Union. Without such a deal, 72.8 percent of UK products exported to the EU would face a new import tariff that would increase from zero to an average of 7.3 percent. Also needed is clarity on new terms with earlier FTA partners, including Turkey, Mexico, South Africa, South Korea, and Canada.

It might turn out that a deal with EFTA could be the quickest, the rest is complicated (me)

The EU should use its trade power strategically