As discussed in part 1 of this blog, China is demanding that after December 2016, the European Union (EU) and the United States must cease designating it as a non-market economy (NME) in investigations over whether it is “dumping” products like steel, paper, aluminum and dozens of other exports into their markets. The evidence presented in part 1 showed that $100 billion of China’s exports to the Group of 20 (G-20) economies were subject to an imposed antidumping or related temporary trade barrier (TTB) import restriction as of 2013, and that this amount had risen over time.

Part 2 identifies the trading partners imposing these restrictions and assesses the potential impact on China’s exports if these trading partners were to grant China its much-desired market economy status (MES) in December 2016.

Importantly, granting MES would not produce an additional $100 billion of Chinese exports to the G-20. Refusal to grant MES to China could result in the WTO authorizing China to retaliate—but also not by raising tariffs over $100 billion of trading partners’ exports. Moreover, because China’s trading partners have other policy tools at their disposal to impose trade barriers on China, the evidence suggests that granting China MES is not likely to significantly increase Chinese exports worldwide.

The United States, EU, and India head a list of many trading partners that impose TTBs that are higher than they would otherwise be if China were designated a market economy. Figure 1 illustrates estimates of the value and the share of China’s total exports that were affected by each of its G-20 trading partners’ TTB import restrictions as of 2013. 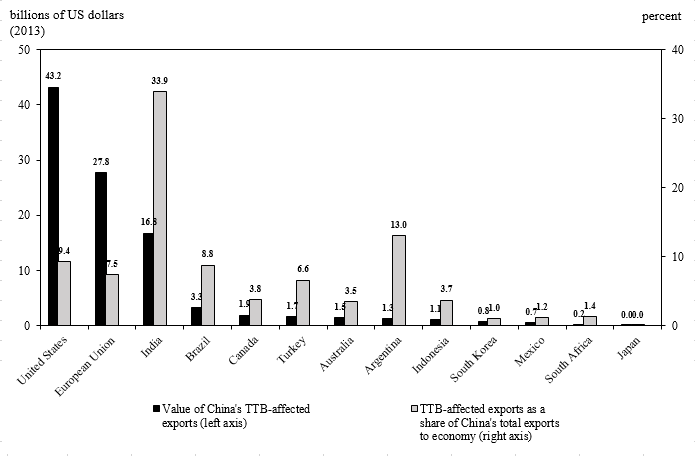 Source: Constructed by the author with data available from the World Bank’s Temporary Trade Barriers Database. G-20 (Group of 20) are all G-20 economies except Russia and Saudi Arabia, for which data are missing. The methodology involves constructed estimates for the denominator (total exports) and is based on that developed in Bown (2011, 2013).

China has six trading partners that imposed TTBs on 6.6 percent or more of its total exports to their markets as of 2013, including Turkey, the EU, Brazil, the United States, Argentina, and India. India is the largest, having subjected a third of its imports from China to antidumping or a related import-restricting TTBs in 2013.

The United States ($43.2 billion) and EU ($27.8 billion) were the dominant imposers of these import restrictions when measured in nominal terms. Add in India and these three combine for roughly $88 billion of Chinese exports to their markets subjected to TTBs as of 2013. This is not surprising, given that these were three of China’s top eight export markets and that they imported more than a third of China’s total goods exports in 2013, even with all of those TTBs in place. Their size explains why China is concentrating on achieving MES. However, they are not alone—Canada, Japan, Mexico, Argentina, and Brazil also treat China as an NME in their antidumping investigations (Puccio 2015).

On the other hand, granting China MES would not immediately unleash $100 billion of Chinese exports to the G-20 markets. Nor would the WTO authorize China to retaliate against the United States and others refusing to grant it that status by raising its tariffs over $100 billion of imports. There are five reasons why that is so.

1. NME status only affects the size of the “dumping” calculation. It does not directly affect the “injury” determination in antidumping investigations. The antidumping law also requires evidence that the domestic industry is injured by dumped imports. The injury decision is unlikely to be affected by a change in NME status. Thus while the size of the imposed duty may change in any given investigation as a result of reform to NME status, the government’s binary decision of whether to impose “any” new import protection is less likely to be affected. A change in NME status may affect the size of the tariff, but it is unlikely to affect the outcome of whether any tariff is imposed.

2. While antidumping duties are the most heavily applied TTB across the G-20, some countries (including the United States and EU) use a different policy known as countervailing duties, in addition to antidumping.  Turkey and India are major users of a third policy called a safeguard. The estimates presented here capture all of these policies together, though importantly it takes care to not “double count” the same exports that might be simultaneously affected by two or more such “redundant” policies.

3. Because some countries already impose antidumping and countervailing duties simultaneously against the same imported products from China, any adjustment to the size of an imposed antidumping duty (due to a change in NME status) may not reduce China’s exports significantly. Antidumping duties are company-specific and can be imposed when goods are sold below fair market value. Countervailing duties are country-specific and imposed when a foreign government provides tax breaks, subsidies, or other forms of aid to exporters. The duties are calculated to replicate the value of the subsidy. Since 2007, roughly 75 percent of the new US antidumping import restrictions on China resulted in simultaneous imposition of countervailing duties.

4. Furthermore, some countries also switch between utilizing antidumping and other related policies over time, and thus a reduction in antidumping use could simply be countered by increased WTO-consistent safeguards or countervailing duties. In the case of the US steel industry, for example, Washington restricted steel imports in 2001–03, following a short recession and appreciation of the US dollar. In other eras—e.g., 1991–92 recession, 1997 Asian financial crisis, today’s global overcapacity—the US steel industry has tended to request antidumping actions.

5. Some G-20 trading partners have already granted China market economy status. While it is not one of the major users of antidumping overall, Australia, for example, granted China MES in 2005 as a condition of the two countries opening free trade agreement negotiations.

Granting China MES could affect antidumping investigations covering a substantial amount of Chinese trade. But even a complete revocation of China’s NME status is extremely unlikely to unleash an additional $100 billion in pent-up Chinese exports onto global markets. Furthermore, even in the long-run event of a hypothetical WTO dispute, estimates of the lost trade flows associated with any refusal to provide MES are probably much closer to $10 billion—and perhaps even $1 billion—than $100 billion.

Appendix: Primer on Methodology for Construction of Estimates

Bown (2011, 2013) provides a more complete description of the methodology for constructing the estimates in figures 1 and 2 (in part 1), and figure 1 (in part 2). This appendix briefly provides intuition on the key assumptions and issues arising under this approach.

First, because the original exercise was conducted across countries for comparability, the estimates were constructed using data at the 6-digit Harmonized System (HS) level, as that is the most disaggregated level that is consistently defined across countries. To the extent that a country imposes TTBs over only a subset of 8- or 10-digit products within a 6-digit HS code, this could overestimate the amount of trade affected. The policy data are taken from the World Bank’s Temporary Trade Barriers Database and the HS06 trade data are taken from UN Comtrade made available from the World Integrated Trade Solutions (WITS) free online software platform.

Second, the methodology has been designed to prevent mismeasurement due to “duplicative” trade policies being applied—e.g., it does not “double count” the same exports affected by a country’s simultaneous imposition of antidumping and countervailing duties.

Third, the share of trade affected by TTBs in place in a year is an import coverage ratio. In order to be defined consistently over time, an assumption is required regarding the growth rate of TTB-affected exports—entering both the numerator and the denominator—under the counterfactual scenario that the TTB had not been in place. The relatively conservative assumption made under this methodological approach is that TTB-affected exports would have grown as fast as the average rate of import growth in the economy.

Note finally that revisions to the trade and policy data explain why some of the data presented in these figures differ slightly from when they were first constructed in Bown (2014).