Despite its success as an export powerhouse, China has long protested that it has been relegated to the status of a “non-market economy” (NME) by the United States and the European Union (EU). In particular, China has chafed over the fact that under the rules of the World Trade Organization (WTO) it can be treated as an NME when trading partners determine that China is “dumping” exports into their markets. As a consequence, Europe and the United States have often imposed what Beijing argues are excessively high duties on steel, aluminum, paper, window towers, solar panels, and dozens of other products in antidumping proceedings.

In December it will be 15 years since China acceded to the WTO, and its NME status has become a heightened political issue for trade negotiators in 2016. China argues that after December, its trading partners must grant it market economy status (MES). Europe and the United States disagree.

The issue has become more than a minor irritant between China and its largest trading partners, at least in Beijing’s view. The evidence presented here shows that as of the end of 2013, 7 percent of China’s exports to the G-20 economies, or roughly $100 billion of China’s exports in nominal terms, were subject to antidumping duties or related import restrictions known as temporary trade barriers (TTBs). On the other hand, it is less clear that granting China MES would necessarily bring about a major change in trade volumes given the myriad of other TTB policy tools that the United States, EU, and other economies already have at their disposal.

This two-part blog assesses the scale of trade that is affected by the use of antidumping strategies, highlighting why China is focusing so much on the issue. The first part introduces the policy issue and the market access at stake for Chinese exporters in antidumping cases. Part 2 will examine the extent to which China’s exports may increase if the United States, EU and other major economies granted it MES. The extent to which China’s exports are—and are not—likely to change if its status is modified should obviously be an important consideration for policymakers.

The right to treat China as a “non-market economy” was granted to WTO members under the terms of China’s WTO accession of 2001. But China now argues that this right expires in December 2016 and that its trading partners must grant it “market economy status” at that time. European and American officials counter that the large government role in subsidizing and regulating China’s export industries means that it must continue its “non-market” status, subject to higher duties in dumping cases. For a discussion, see Hufbauer and Cimino-Isaacs (2016) and Puccio (2015).

In the United States, China’s NME designation allows the Department of Commerce greater discretion in determining whether Chinese firms are “dumping” goods—i.e., selling them at below reasonable cost in the US market.  NME treatment also allows Commerce to impose larger antidumping duties. It is clear why China desires market economy status. The larger the scope of China’s exports subject to antidumping, the bigger the economic impact on China.

If history is a guide, WTO judges could authorize China to retaliate by an amount defined by the value of trade that China can show it is “losing” because of continuation of NME treatment. Put differently, China could increase its tariffs that cost its trading partners the same amount as the revenue lost by China because of being treated as an NME. Thus if China could show it lost $5 billion in exports to a country annually because of its continued NME treatment, it could raise tariffs to reduce its imports from that country by $5 billion.

The largest authorized WTO retaliations to date have been $4 billion granted to the EU in the US – Foreign Sales Corporation (FSC) dispute and roughly $1 billion recently granted jointly to Canada and Mexico in the US – Country of Origin Labeling (COOL) requirements dispute. The largest amounts over which the U.S. has been authorized WTO retaliation were $191 million in the EC – Bananas III dispute and $117 million in the EC – Hormones dispute. Bown and Ruta (2010) describe how retaliation through these trade effects calculations has been operationalized in 10 actual WTO disputes.

Assessing the economic impact of MES is complicated. Coming up with a precise number is beyond the scope of the present exercise, as it would also require a formal economic model. The approach here relies on relatively disaggregated data on the policy, trade flows, and a back-of-the envelope calculation to provide an initial benchmark estimate and to guide the discussion of the key conceptual issues involved. Two broad points are apparent, however.

1. The share of China’s exports subject to foreign-imposed antidumping and other TTBs has increased since the early 1990s, but it was largely flat at around 7 percent between 2010 and 2013.

Figure 1 illustrates estimates of the share of China’s exports to the Group of 20 (G-20) economies that the G-20 collectively subjected to TTBs (such as antidumping, countervailing duties, and safeguards) each year during 1995–2013. While antidumping makes up the overwhelming majority of TTB policy use during this period, it will turn out important to also keep the other TTB policies of countervailing duties and safeguards in mind. The share of imports from China that has been covered by newly imposed TTBs has been increasing over these two decades, but that share increased when China acceded to the WTO in 2001. After 2001, China’s export growth accelerated even faster and thus put competitive pressure on domestic producers in many trading partners around the world. However, also in 2001, the full WTO membership granted China their applied most-favored-nation (MFN) tariffs and trading partners were forced to convert all other China-specific nontariff measures into potentially WTO-consistent forms of import restrictions such as antidumping.

Figure 1 Share of China's exports to G-20 subject to G-20-imposed antidumping and other temporary trade barriers, 1995-2013 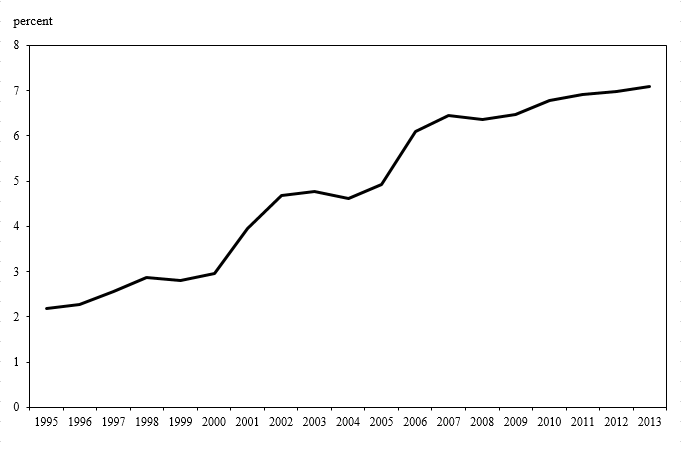 Source: Constructed by the author with data available from the World Bank’s Temporary Trade Barriers Database. G-20 (Group of 20) are all G-20 economies except Russia and Saudi Arabia, for which data are missing. The methodology involves constructed estimates for the denominator (total exports) and is based on that developed in Bown (2011, 2013).

2. The scale of China’s exports subject to foreign-imposed TTBs is larger than the scale of exports in other economies.

Figure 2 again illustrates that as of the end of 2013, 7 percent of China’s exports to the G20 economies, or roughly $100 billion of China’s exports in nominal terms, were subject to an imposed antidumping or related TTB import restriction. 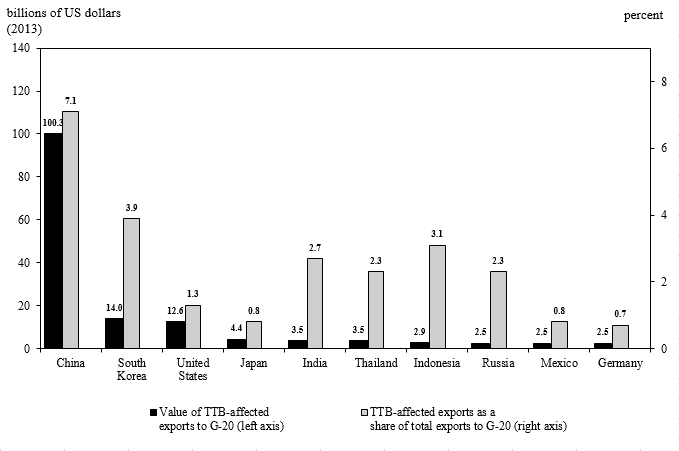 Source: Bown and Crowley (2016, figure 3), constructed with data available from the World Bank’s Temporary Trade Barriers Database. G-20 (Group of 20) are all G-20 economies except Russia and Saudi Arabia, for which data are missing. The methodology involves constructed estimates for the denominator (total exports) and is based on that developed in Bown (2011, 2013).

To be clear, the $100 billion of Chinese exports affected by G-20-imposed TTBs is not equivalent to the value of China's lost exports due to its NME status.

In nominal terms, China’s affected exports were roughly seven times larger than the second and third most affected exporting countries, South Korea and the United States, at $14 billion and $13 billion, respectively. Roughly 7 percent of China’s total exports were subject to foreign-imposed TTBs as of 2013, whereas 3 to 4 percent of exports for Korea, Indonesia, and India were subject to foreign-imposed TTBs. For countries like Germany, Japan, and the United States, it was only 1 percent of their total exports.

The second part of this blog will identify the trading partners accounting for this $100 billion in exports and what would happen to China’s exports if these partners were to grant it MES but still proceed with antidumping or other TTB investigations.