The latest volley of tariff actions and threats in early August between the United States and China has established one obvious pattern: President Trump’s efforts to get China to change its behavior have thus far failed. That much was clear on August 3, when China announced that it was prepared to impose additional tariffs on $60 billion of imports from the United States, in response to the Trump administration’s escalation of tariffs a day earlier, in announcing tariffs of up to 25 percent on $200 billion of imports from China.

Beijing did not indicate when its tariffs—ranging from 5 to 25 percent—would take effect. But following recent precedents, China can be expected to ratchet up its import duties soon after Trump imposes his next set of tariffs on $200 billion of Chinese products, which could be as early as September.

If the initial April barrage of US tariff and Chinese counter-tariff threats was designed to spur bilateral negotiations, the result was a failure. The Trump administration’s half-hearted and disorganized overture for talks in May quickly fizzled. And those tariff threats of April? Trump imposed his first round of tariffs on July 6; China responded later that same day. On July 10, the Trump administration announced its second round of tariffs on an additional $200 billion of goods. Since China’s total goods imports from the United States stood at only $154.8 billion in 2017, Trump’s four-fold escalation seemed a political maneuver aimed to prevent China from countering dollar for dollar.

But when that move did not elicit an immediate Chinese response, Trump raised the ante, first, in an interview with CNBC on July 20, indicating that he might impose tariffs on all $500 billion of China’s exports. And then, on August 2, the Trump administration announced its intention to increase tariff rates to 25 percent on the same $200 billion imports from China it had said less than a month earlier—without a Chinese response—that it planned to hit with 10 percent tariffs.

Estimates of the product-level trade data indicate that China’s newly announced “$60 billion tariffs” target $53.4 billion of Chinese imports from the United States in 2017. This time around 67 percent of the trade is in intermediates goods, 26 percent in capital equipment, and only 7 percent in consumer goods (figure 1).

The shift toward intermediates is different from China’s earlier retaliatory tariffs on US exports in response to Trump’s first set of tariffs, as well as those imposed on steel and aluminum. Beijing’s initial tariffs targeted US agricultural exports, hitting over 90 percent of its nearly $21 billion of sales to China in 2017. China’s $60 billion list focuses on intermediates and capital equipment, but that is largely a function of what Beijing has left to hit with retaliation. 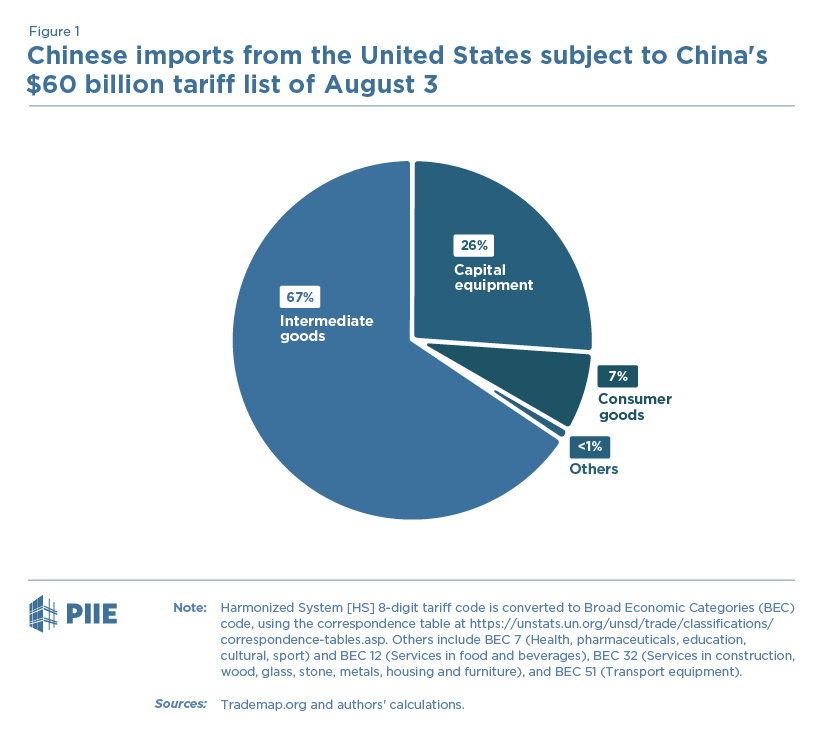 The major industries targeted by China’s newly proposed retaliatory tariffs are machinery, mechanical appliances, electrical equipment ($16.0 billion), chemicals ($7.9 billion), as well as wood and articles of wood, pulp, and paper ($5.8 billion) (figure 2). Particularly large individual products on the list include physical/chemical equipment ($2.1 billion), processed wood ($1.7 billion), medical equipment ($1.6 billion), and chemical wood pulp ($1.3 billion).[1] Liquified natural gas (LNG, $0.6 billion) is also subject to the proposed additional 25 percent tariff. This last tariff could have effects well beyond the deflection of shipments in the short run. China has been expected to be a major future customer for US LNG, and Chinese LNG contracts are critical for investments in new US energy infrastructure. The tariff war could hurt energy investments in Alaska and Texas. 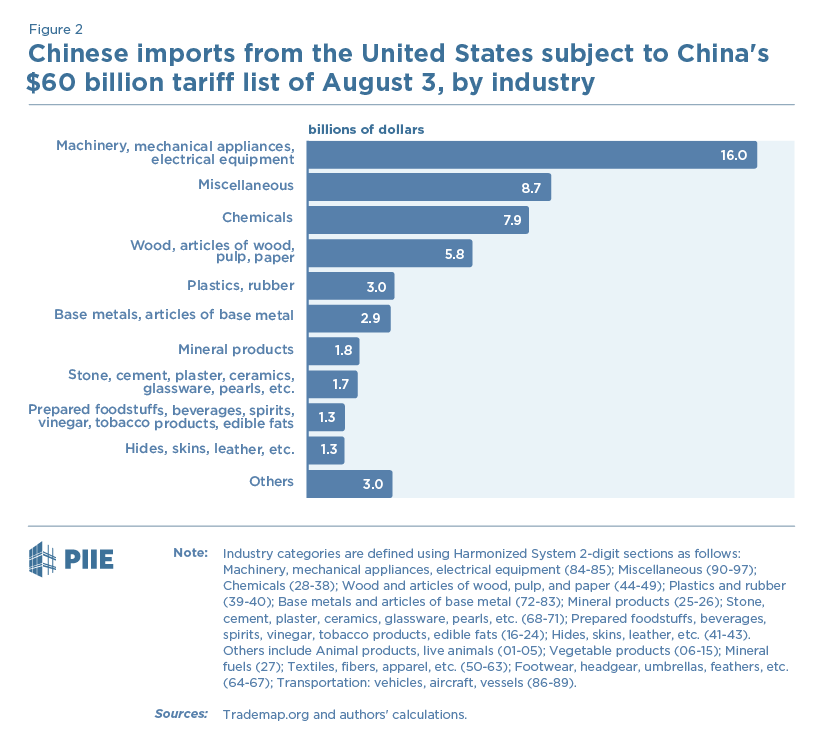 What US exports to China remain not yet targeted?

As figure 3 indicates, the major products not yet hit are intermediate goods and capital equipment. Only 5 percent of those products are consumer goods. 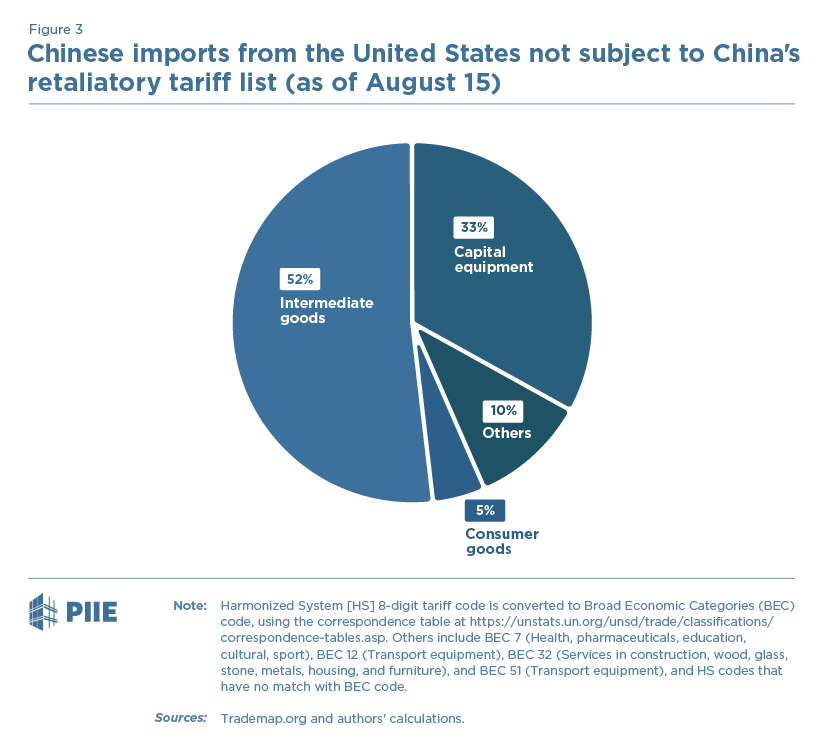 Examples of major US products not yet targeted include aircraft ($13.3 billion), some semiconductors ($10.2 billion), and crude oil ($3.2 billion). Crude oil had been added to the revised list of products published on June 15 in response to the US threat to hit $50 billion of Chinese exports and was included in the second tranche of Chinese proposed counter-tariffs. However, Beijing dropped that crude oil product line, accounting for 22 percent of China’s $14.5 billion list of second tranche products, when it substantially recast the products covered on August 8. China added 255 new tariff lines to make up the difference. 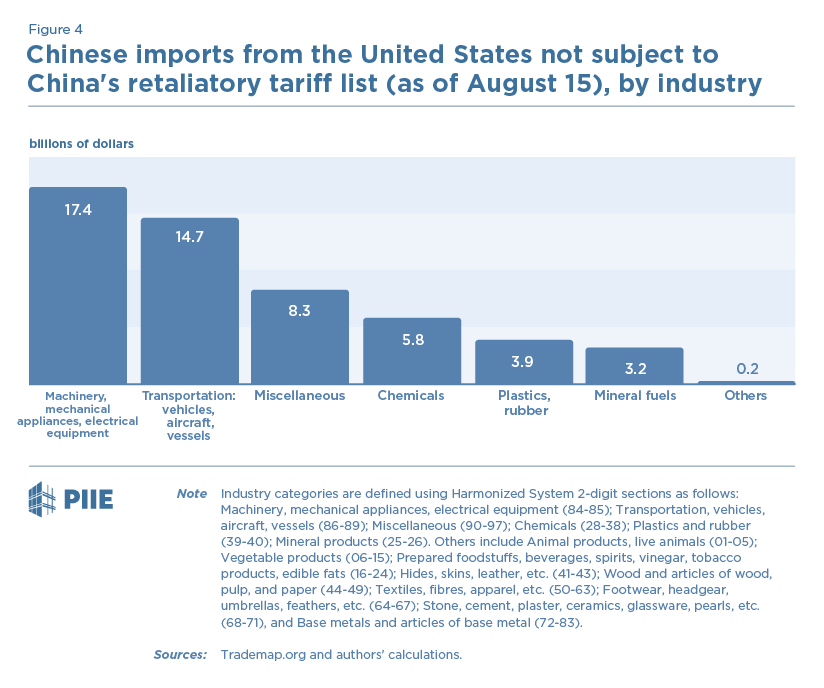 China has taken a deliberate and cautioned approach with this proposed retaliation. President Trump seemingly had to make two further escalations beyond his $200 billion tariff action of July 10 before Beijing made the political decision to announce it would retaliate. Some of China’s proposed retaliatory tariffs are moderate in size at 5 percent; China is thus likely also seeking to minimize the economic costs to itself of new import restrictions.

Nevertheless, the Chinese tariffs will still inflict pain on American companies and workers who suffer lost sales and lower producer-received prices for any future sales into the Chinese market that they manage to sustain.

On the tariff front, the only end in sight seems to be the point at which the full set of imported products has been covered by tariffs, so there are no more left to list. While this is costly economic policy for both sides, it is an outcome and a reality that is getting precariously close.