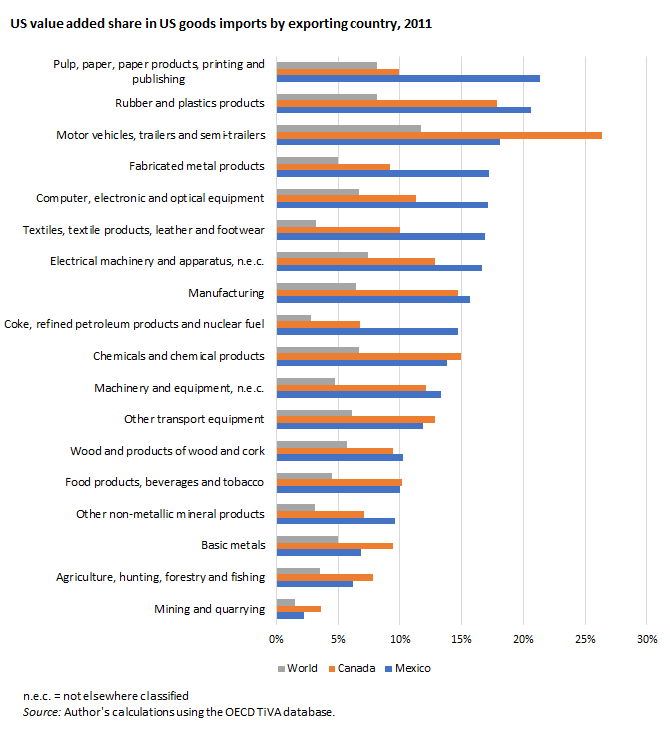 While I am in agreement with the position you state in the headline of this piece, I wish to make some comments.

First, I believe that conventional wisdom places US content in US auto imports from Canada and Mexico  at closer to a half, and not the data Ross cites, nor that which you mention in your blog “A US Content Requirement in NAFTA..”). Responding to Secretary Ross’s op-ed, Toronto’s Globe and Mail published on October 4, 2017 an op-ed by Flavio Volpe, the president of Canada’s Automotive Parts Manufacturers Association, who challenged the OECD data on US content in its imports from Canada, asserting that “[A] recent Scotiabank Economics report put that figure at almost 60 per cent,” – without, however, providing a specific citation, nor have I found it. On October 11, 2017, an article in Automotive News cited Eduardo Solís, President of the Mexican Association of the Automotive Industry (AMIA), that “[A] Mexican-made auto currently has about 40 percent of its parts and components from U.S. sources.” In an article in the Mexico City newspaper El Universal of October 10, 2017 by Sara Cantera “AMIA rechaza estudio de la OCDE,”  that same Mr. Solís is cited as affirming that the US content in Mexican exports to the US is between 37% and 39.5%.  The New York Times published “What Would Happen if the U.S. Withdrew from NAFTA,” by Ana Swanson and Kevin Granville, October 13, 2017, page B6 that asserted that US content in cars imported from Mexico is about 40% [this may simply refer to the Solís result]. The Center for Automotive Research (2017) in its “NAFTA Briefing: Trade benefits to the automotive industry and potential consequences of withdrawal from the agreement,” on page 8 cited a 2014 Wharton School report also asserting that the US content of cars imported from Mexico was 40%, up from 5% before NAFTA. The referenced Wharton report provides no information on the methodology used for this conclusion. Finally, INEGI, the Mexican statistical agency, published “Statistics in Occasion of… The Automotive Industry”, (2016) [translation into English of Estadísticas a propósito de… la Industria automotríz 2016], which on p. 16 states that the fraction of the final value of Mexican produced cars and trucks attributable to imported inputs was 44.6%, while that for automotive parts was 41.4%. They used an input-output table, but their methodology was quite distinct from that of the OECD.

Secondly, and still referring to the Ross – Flatness/Rasmussen Department of Commerce work, I should think that a more telling criticism of Ross is that effectively he only considers jobs created via our exports, that are re-imported as components of motor vehicles. But it would seem that much more is at stake in our exports of finished cars, or exports of parts that will be consumed elsewhere. The TiVA data has estimates of nominal values of these series, but of course converting that into jobs is a significant task.

Thirdly, in your iie blog “Why Wilbur Ross’s Approach Will Hurt …” the two links in your first end note both go to the same source: the Koopman et al. NBER paper #14626.  The point you raise that they supposedly refer to is important, that the OECD data does not consider trade through Mexico’s processing zones. If Koopman et al. refer to this limitation on OECD/Mexican trade data, I missed it. Or was the discussion in the other paper whose link got lost?

Finally, and getting back to your on-the-spot assertion that the administration’s proposed policies will ruin these auto value chains, I have a question as to whether you know of any empirical work on that line? While reading on this subject, I recently ran across a reference from a consulting group in Boulder called ImpactECON, “Reversing NAFTA: A Supply Chain Perspective.” Any other references would be welcome.  They talk about employment declines in the US and Canada of over 100,000, which sounds credible to me. Moreover, their toll for Mexico is over 900,000, which while both alarming and large, does reflect the large number of low productivity (and income) workers in auto parts.

Your response to these comments would be most welcome.

Thanks for your comment. There are a number of different estimates out there for the US content. The TiVA data are only one estimate and I do not think they are the best. In fact, since I wrote this blog, a better estimate has come out which puts the number at close to 40 percent. The new paper (https://scholar.harvard.edu/files/alonsodegortari/files/degortari_dgvcs_october2017.pdf) uses firm-level data, allowing the author to control for the unique input mix of firms that export to the United States.

I agree that counting the US content of imports is the not the best way to evaluate the gains from NAFTA.  But, Ross was responding to comments from others about supply chains and US content.

A host of studies are being done on NAFTA supply chains now. In addition to the one you mention, some summaries of others are available at these links:

Mary Amiti and I offer some statistics on supply chain trade here: https://piie.com/blogs/trade-investment-policy-watch/why-renegotiating-nafta-could-disrupt-supply-chains