US Exporters Could Face High Tariffs without NAFTA

An underappreciated benefit of the North American Free Trade Agreement (NAFTA) is the protection it offers US exporters from extreme tariff uncertainty in Mexico. US exporters not only have gained greater tariff preferences under NAFTA than Mexican exporters gained in the United States but also have been exempt from potential tariff hikes facing other exporters. Mexico’s bound tariff rates—the maximum tariff rate a World Trade Organization (WTO) member can impose—are very high and far exceed US bound rates. Without NAFTA, there is a risk that tariffs on US exports to Mexico could reach their bound rates, which average 35 percent. In contrast, US bound rates average only 4 percent. At the very least, US exporters would be subject to a higher level of policy uncertainty without the trade agreement.

Since joining NAFTA in 1994, the US share of trade with Mexico has grown, as shown in the chart below. Mexico’s share has risen to 14 percent of total exports and imports. In the same time frame, the US share of trade with China has increased even more rapidly, although no free trade agreement with China is in place. Mexico’s export and import shares are the same, but China accounts for a much bigger share of US imports than of US exports. 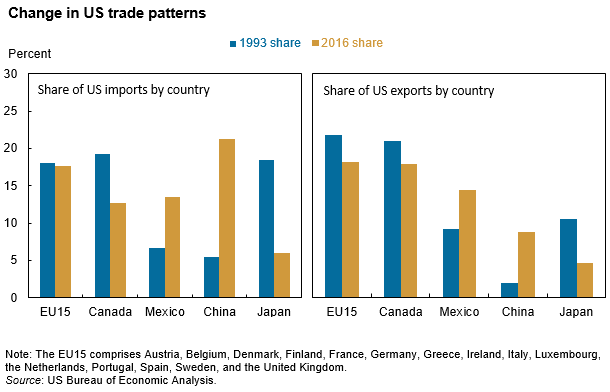 US Benefits from Preferences in Mexico

Often forgotten in the debate about NAFTA are the benefits to US companies. NAFTA grants US exporters duty-free access to the Mexican market in exchange for duty-free access for Mexican exporters in the US market. By contrast, exports from WTO member countries that do not have free trade agreements with either Mexico or the United States are subject to “most favored nation” (MFN) applied tariffs in those countries.

Without NAFTA, Mexico would have more freedom to raise tariffs on its imports under international rules than would the United States. The reason is that Mexico’s bound rates—the maximum rate a WTO member can impose—are well above its applied MFN rates. In contrast, US tariffs are bound at applied rates. In successive multilateral trade liberalization rounds, the United States and other advanced countries agreed to bind their tariffs at progressively lower levels to protect member countries against trade wars and to sustain trade liberalization. If a member country were to raise tariffs on imports from WTO members above bound rates, WTO rules would require it to compensate affected members.

Developing countries were largely excluded from these tariff commitments. Unlike the United States, where tariffs are bound at the lower applied MFN rates, Mexican tariffs are bound at rates above their applied MFN tariffs. The average bound rate for Mexico is 35 percent. More than 90 percent of US exports to Mexico are in products with bound tariff rates above 30 percent (see chart below). The large gap between the bound rates and the applied rates, known as the “binding overhang,” means that Mexico can raise tariffs significantly without breaking international rules, provided it does so on a nondiscriminatory basis. 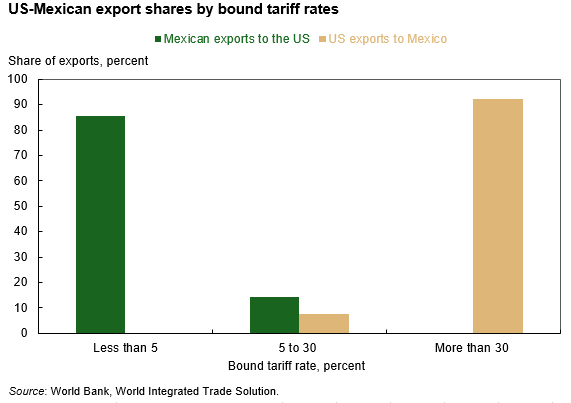 This binding overhang implies that countries not in trade agreements with Mexico face significant policy uncertainty. Recent research finds evidence of depressed investment and trade in countries facing the uncertainty of higher tariff rates on their exports.

It would not be unusual for Mexico to raise MFN tariffs, taking advantage of high bindings governing its trade. Mexico’s average tariff rose from 13 percent in 1995 to more than 18 percent in the early 2000s when tariffs increased by 50 percent or more on some agricultural products. Car parts and textiles and apparel also faced steep tariff hikes. Eventually, the increase in external protection created large preferences for NAFTA goods, which was costly for the Mexican economy. Importers were shifting to US goods, even when the United States was not the lowest-cost producer and imports from the United States did not bring in tariff revenue. Research shows that this so-called trade diversion encouraged unilateral trade liberalization to ensure that imports external to trade agreements were not cut off.

Given the large and well-documented benefits from low trade barriers, particularly those stemming from access to a wider variety of imported intermediate inputs and lower prices of intermediate inputs, it would not be in Mexico’s interest to raise all of its MFN tariffs to their bound rates. But Mexico has the flexibility to do so and may choose to do so on some products in the absence of NAFTA. MFN tariff hikes, which are nondiscriminatory, could disproportionately affect the United States because Mexico has other free trade agreements. The vast majority of Mexico’s imports enter duty free as a result of its 19 trade agreements. If MFN tariffs were increased on products available from other free trade partners and the United States, only other trade agreement partners would be protected if US exporters were not insured with NAFTA. For example, Mexico's bound rate on steel is 35 percent. Mexico accounts for 30 percent of US steel exports, but it could turn to many alternative suppliers, damaging US exports, with little (if any) additional cost to Mexican steel importers.

In another example of the potential harm to US interests, it is worth recalling that NAFTA’s liberalization of US corn exports was strongly opposed by Mexican growers 25 years ago. The bound rate on corn—one of the largest US exports to Mexico and a crop considered to be a national heritage in Mexico—is 37 percent. Thus Mexico could raise its tariff on US-grown corn to 37 percent without breaching any international rules.

Put simply, Mexico has a lot of room to raise tariffs, up to its bound rates of about 35 percent. In contrast, the United States has less room to adjust its tariff rates without breaching WTO rules because the US MFN tariff rates of about 4 percent are already at their bound rates. Thus, for US exporters, NAFTA offers a valuable insurance policy against Mexican tariff hikes.

Mary Amiti is an assistant vice president in the Federal Reserve Bank of New York’s Research and Statistics Group. Caroline Freund is a senior fellow at the Peterson Institute for International Economics.

NAFTA and the North American Future