In the latest threat to escalate his trade war with China, President Trump has raised the possibility of new tariffs on all US imports from that country. The warning came in an interview with CNBC on July 20, when Trump declared: "I'm ready to go to 500," an apparent reference to the $504 billion total of US goods imported from China in 2017. "You know the expression 'We’re playing with the bank’s money,' right?"

While Trump may think he is playing with the bank’s money, he is gambling with American families’ jobs, incomes, and livelihoods. There is reason to believe Trump is not making an idle threat. He is implementing all the tariffs he had previously announced this year, on friends and foes alike. And this escalation has no end game in sight—few signs of China doing anything that could placate this White House.

The historic logic of tariff proponents is that tariffs are needed to protect American producers from cheap imports. But Trump’s actions would force American consumers to pay higher prices for many products for which there are no American companies producing such goods or even asking for tariff protection. These newly threatened tariffs would hit many consumer goods left off his previous lists—tens of billions of dollars of household purchases of smartphones, laptops, televisions, clothing, and footwear. All told, this tariff action alone would hit $262 billion of US imports in 2017, or about 11 percent of all US merchandise imports.

Because of Trump’s trade actions, American companies have already lost competitiveness in global markets. The earlier tariffs on steel, aluminum, and parts and components will reduce US companies' global sales by raising the cost of their inputs. And Canada, the European Union, China, and others have also now retaliated, eliminating some US sales to foreign markets, reducing production and costing jobs in American agriculture and manufacturing. Yet, retaliation on US agricultural exports has led the Trump administration to double down on bad policymaking. Trump is now reportedly planning to further distort markets and dole out federal subsidies as an attempt to buy silence from the American farmers hurt by his tariff decisions.

These damaging numbers will continue to rise unless President Trump finds a way to resolve his trade war.

Figure 1 illustrates the types of Chinese goods subject to Trump’s tariff threat of July 20. These goods cover the remaining $262 billion of US imports from China not already under tariffs or being vetted for tariffs as previously announced under the Section 301 investigation.

Capital goods and consumer products are the major targets, accounting for 46 percent and 38 percent, respectively, of the value of imports that would be hit. Intermediate inputs only account for 14 percent because most are already subject to tariffs announced previously, i.e., intermediates made up roughly 50 percent of the value of products on the two previous Section 301 tariff lists. 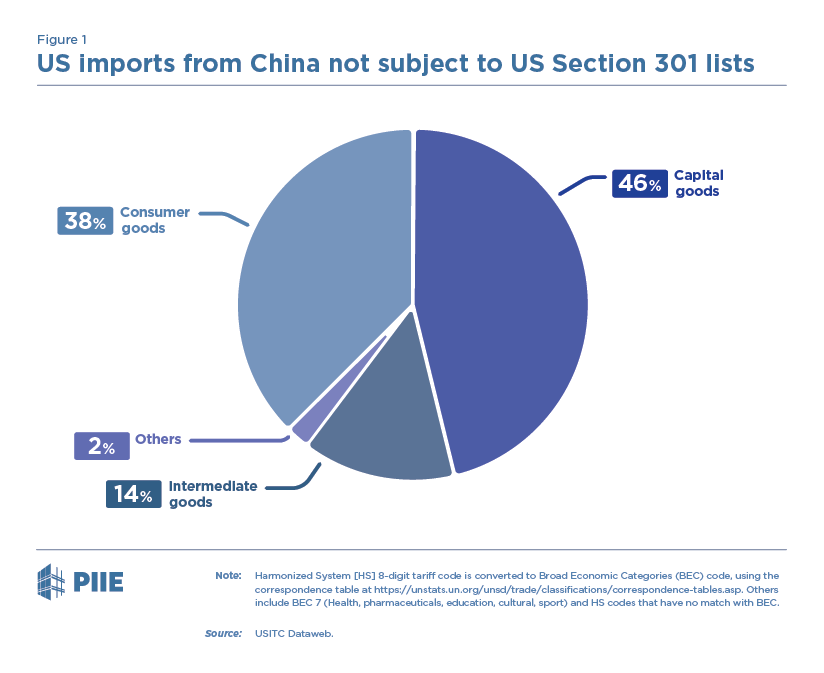 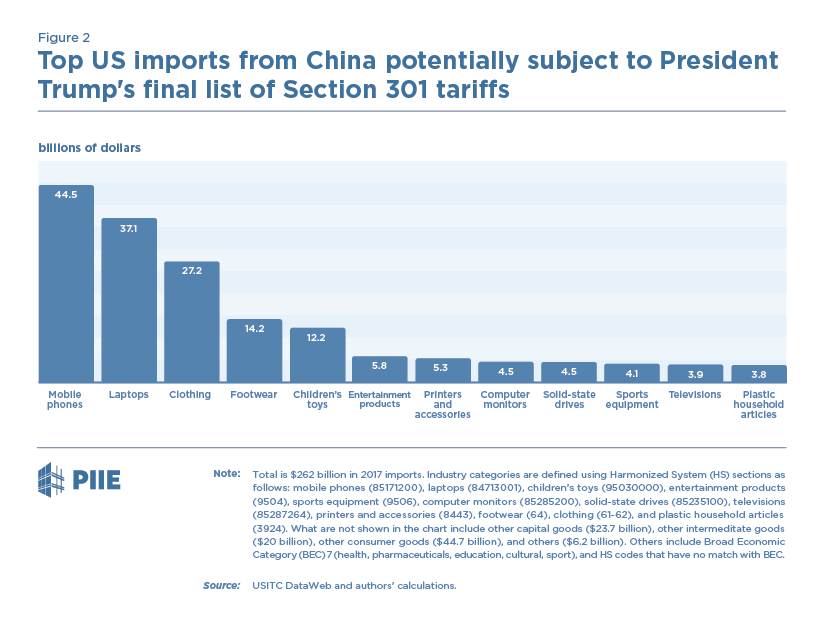 Trump did not present a rationale for his latest trade threat, but it would seem he is relying on the authority he has been exercising toward China so far: Section 301 of the Trade Act of 1974. Trump’s initial announcement of 25 percent tariffs covered roughly $50 billion of imports, $34 billion of which were imposed on July 6 and currently $16 billion of which are going through public hearings as required under US law. He has subsequently announced 10 percent tariffs on another $200 billion of imports that will go through additional public hearings in August, also legally required.

One way to describe the decision to impose even more import tariffs—this time on items like iPhones, sweaters, and sneakers—would be: He is throwing good money after bad. Another way is to recall past wars that were escalated step-by-step, causing great suffering but no resolution until the United States backed down unilaterally.